Growing up in the suburbs during the sixties and seventies, we didn't know we were supposed to be unhappy. But apparently we were. As two recent Criterion DVD/Blu-ray releases contend, the postwar migration of the middle classes to the urban peripheries resulted in an existential crisis that no amount of lawn mowing, cocktail guzzling or back-seat groping could cure.

In 1966, the hot young director John Frankenheimer followed up career-making political thrillers such as The Manchurian Candidate and Seven Days in May with Seconds. It's a deep-focus, steeply angled, Orson Wellesian nightmare about a thoroughly dispirited middle-aged insurance executive named Arthur Hamilton (John Randolph) who undergoes a complete physical makeover to emerge as a highly confused bachelor Tony Wilson (Rock Hudson). What triggers Hamilton's desire for an entirely new persona is the life he leads in the posh but vapid Manhattan suburb of Scarsdale, to which he returns from work every night to stare blankly at his wife before crawling sadly into one of their separate beds.

But his new life as Wilson, a Malibu-dwelling painter, proves just as empty and frustrating as the one he left behind, which underscores the movie's pervading sense of inescapable desperation. It's a tone that Frankenheimer, working with the great black-and-white cinematographer James Wong Howe, maintains by exploiting every possible opportunity for claustrophobic distortion, an aesthetic strategy that undoubtedly contributed to the negative audience response at the movie's Cannes film festival premiere.

New Canaan is another affluent bedroom community of New York reached by commuter train, but the tone struck there in Ang Lee's The Ice Storm replaces Seconds' Kafkaesque hysteria with a cool malaise. Set in 1973 in the fading twilight of Richard Nixon's presidency, Lee's adaptation of Rick Moody's 1994 novel chronicles the wheezy petering out of the sexual revolution over the course of a Thanksgiving weekend. As the weather darkly heads to the event named by the title, a sexual affair expires, a spouse-swapping "key party" leads to the saddest back-seat tryst in history, a teenage sexual encounter is enhanced by a rubber Tricky Dicky mask, and a boy dies alone on a frozen stretch of suburban road.

The Taiwan-born Lee's second English-language film and his first set in America, The Ice Storm regards its period, its characters and its setting with an almost otherworldly detachment. That makes the coming storm feel as grimly inevitable as the multipatterned beige domestic decor, the polyester riot of layered clothing, and the president's prevaricating presence on the rumpus-room TV.

But if the overall ambience of The Ice Storm sometimes suggests Richard Ford visualized by Stanley Kubrick, both James Schamus's script and Lee's cagey casting keep the movie alive and strangely kicking. As the hapless dad trying hopelessly to navigate his way through a sparkless marriage (to Joan Allen), a pointless affair (with Sigourney Weaver) and a tractionless fatherhood (to Tobey Maguire and an amazing Christina Ricci), Kevin Kline is like a Me Decade Dick Van Dyke, a bumbler in black socks and boxer shorts who lies alone on a bed drinking vodka because he's managed to bore his mistress right out of her own home. And as the predatory pubescent sexual explorer who dons a Nixon mask before indulging in a rec-room petting session (with an understandably spooked Elijah Wood), Ricci is like the nightmare spawn of the women's liberation movement.

However, the pop-culture view that the suburbs are the place where the American Dream goes to die has an amusing flip side: That culture owes a huge amount of its inspirational vitality to hating the very place where many of its artists grew up and its audience lives. As both these movies and so many other novels, films, TV shows, music and plays over the years have proved, there's nothing like suburban boredom to generate dramatic excitement.

What did we miss? Your top picks for Chinese eats in Toronto's suburbs
March 2, 2013
Film Review
The Play, A Band Called Death: Two documentaries that aim to enlighten
August 16, 2013 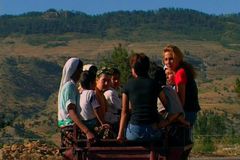 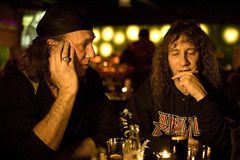