Most of the media here were startled by the release, sent by e-mail Thursday from the Cannes Film Festival's press office, declaring that the festival directors had held a special early morning meeting and declared the Danish director Lars von Trier "persona non grata" at the festival for making Nazi jokes the day before at his press conference.

Von Trier is known as a sarcastic troublemaker but also a festival darling, with nine of his films having been nominated for the Palme d'Or. He won in 2000, for Dancer in the Dark. Most journalists assumed the matter was a closed book the previous day, after the directors of the festival declared its disapproval of von Trier's words and said they had asked him to explain himself.

The press office passed on an apology by von Trier for his sarcastic comments in which he described himself as a Nazi and expressed sympathy for Hitler, saying he was sorry if he offended anyone, and that he was not a Nazi and not anti-Semitic.

After all, the festival had no problem inviting Mel Gibson to this year's event, despite his reported homophobic, anti-Semitic and racist comments over the years.

But the issue didn't go away. Von Trier's film Melancholia was already sold to most markets, on the basis of the director's reputation and its acceptance in the Cannes competition. On Wednesday, its Argentine distributor reneged on its deal to distribute the film and issued a public statement:

"In view of the unacceptable statements expressed by filmmaker Lars von Trier at today's press conference in the Cannes Film Festival and his evident Nazi declaration - which is offensive for the Jewish people and humankind in general, Distribution Company SA, owner of the distribution rights for the film Melancholia in the Southern Cone, has decided to cancel the contract that linked it to the film.

"We clearly condemn Mr. Lars von Trier's statements and will not support or release his film in the country."

The statement was signed by Bernardo and Paula Zupnik, president and head of the company.

The American Anti-Defamation League, contacted by The Hollywood Reporter, weighed in, carefully: "He seems to be struggling with some personal ghosts," said the group's national director, Abraham H. Foxman. "This is one way I guess he resolved them, in a very, very bizarre way."

He was referring to the fact that von Trier has said that he was raised by a Jewish man, but on her deathbed his mother told him he was the product of a tryst with a man of German Catholic descent.

According to The Hollywood Reporter, von Trier responded by saying he was sorry for the damage his comments may have done to the festival.

"It's a pity because [festival president]Gilles Jacob is a close personal friend of mine," von Trier said. "What I said was completely stupid but I am absolutely no Mel Gibson … What I meant was I could imagine what it was like for Hitler in the bunker, making plans. Not that I would do what Hitler did. But it's a pity if it means I will lose contact with Cannes."

But he also told the publication he was "a little proud of being named a persona non grata."

The buzz surrounding von Trier's banishment spread to other films as well. At the press conference for Spanish director, Pedro Almodovar's new thriller The Skin I Live In, an American journalist, trying to be funny, said he just wanted to clear the air and ascertain if Almodovar was a Nazi.

"Uh, no," said Almodovar, and then added in Spanish: "I don't think I need to answer that question."

Soon after the announcement at the Palais, the festival's director Thierry Frémaux showed up at the Salle Bazin to introduce This Is Not a Film, which documents Iranian director Jafar Panahi's house arrest and his experience with a 20-year ban from filmmaking.

As he was leaving the theatre Frémaux said that "perhaps" there would be a press conference to explain the decision in more detail, but the press office remained mum on what exactly the "persona non grata" status entailed.

As for this year, it makes little difference to von Trier, who has already had the gala for his film on Wednesday night. His Melancholia remains in competition for the Palme d'Or. 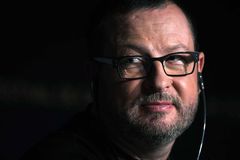