In Olivier Assayas's Clouds of Sils Maria, Juliette Binoche plays a figure not unlike herself: a decorated French actress named Maria Enders who is constantly in demand by art-house and mainstream filmmakers alike. The film pivots on the character's decision to revisit the play that made her a star at the beginning of her career, this time playing a different part – not the beautiful ingenue but the older woman who falls under her spell. This role reversal becomes a marvellous metaphor for the way that people become haunted by memories of their own youth – the past aches like a phantom limb.

"I'm not attached to the past," said Binoche during an interview at last year's Toronto International Film Festival. "I think that that's the major difference between me and Maria. I don't hang onto things. I prefer to be in the present. I love challenges."

With several decades' worth of plaudits and an Academy Award in her back pocket, Binoche has nothing to prove, which may be why her choices continue to be so bold. Her challenge in Clouds of Sils Maria is to inhabit a character with many sides; over the course of the film, we see Maria in a variety of guises: the imperious public celebrity throwing her weight around on– and backstage; the driven, middle-aged professional fretting over her fortunes to her assistant (Kristen Stewart); and in rehearsals for the play, where she seems almost possessed by a character whose vulnerability she at once recognizes and resents.

"I think that this film allows the audience to follow all the things that an actor can go through," she says. "It's about what it means to give yourself to a role that you might fear. I think that [Maria] has the courage to face her demons and her fear, and to transform it into something else."

That idea of evolution and shape-shifting is central to Clouds of Sils Maria, and yet part of what makes the film work is the familiarity of Binoche's star persona: The behind-the-scenes drama of agents and awards galas feels authenticated by her presence. Binoche says that those resonances are not only intentional, but deeply woven into the fabric of the screenplay. "The issue is how fiction intrudes on reality, and also vice versa. It's a very classical theme, especially in movies, which always play with the idea of what is real and what is not."

Binoche acknowledges that she's worked with a number of filmmakers who have worked within similar conceptual frameworks, including Michael Haneke, who also cast her as an actress in his brilliant breakthrough feature Code Unknown (2000). "[Michael's] need for veracity is so big," she says, "that if there was even a hair out of place, he would have a tantrum about it." She's also worked with Assayas before, and reports that if anything, the French writer-director has tried to develop a less controlling approach over the years. "What I think [Assayas] has been taking from the Asian way of filmmaking – from Hou Hsiao-Hsien – is the idea of improvising in one take. Everybody gets creative."

After 30 years' worth of acting for the world's great directors, Binoche knows that she could probably teach a graduate class in filmmaking, but she prefers to keep her lessons small-scale. She describes working on a recent production helmed by a first-time director who was trying to micromanage every aspect of her performance. "He was trying to control me from the beginning, and I said, 'you can't do that.' I said, 'give me two or three takes and see where I go,' " she laughs. "He was very frightened when I said that."

Although she insists she doesn't dwell on her past roles or feel possessive about her parts, Binoche is willing to acknowledge how she's changed as an actress. "When I started, I was never interested in where the camera was. I wanted the camera to come to me, into my intimacy. And I had directors who asked me to give myself to the camera, and it was a real tilt for me."

She says that she's learned that changeability is more than a matter of technique. "Acting is like taking a peel off yourself. The new is always inside. The challenge is how do I let go of what I know, or what people expect of me? How do I renew myself and be humble so that I don't have that knowledge of acting? That, for me, is the difference between acting and being."

Leaving her self-critique aside, the performance that Binoche is eager to discuss is the one given by her co-star. Any skepticism that Kristen Stewart would be able to hold her own with a heavyweight like Binoche is dispelled within the space of their first scenes together. "I knew that [Stewart] was fantastic," she exclaims. "It wasn't just in the films that I saw, but in the interviews [that she did]. The way she is listening and answering – that's somebody who is alive and present and intelligent and sensitive. I knew she had everything. I wanted to push her, because I wanted her to lift up!" 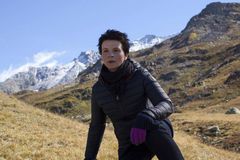 Juliette Binoche partial to pictures over words
May 12, 2018 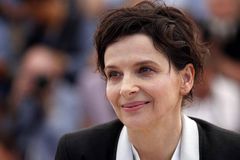