In Paul Verhoeven's mighty melodrama Showgirls, aspiring exotic dancer Nomi Malone (Elizabeth Berkley) makes a habit of storming out of rooms in a huff, slamming the door behind her. It's the signature gesture of a young woman who knows when she's not wanted, which, given her erratic behaviour, is most of the time.

Following the film's epic belly flop into theatres late in 1995, Verhoeven knew how she felt. A decade after getting chased out of the Netherlands for making movies that people hated, the Dutch director was once again a candidate for exile – this time from Hollywood instead of his home country. After all, you can't make a movie as disastrous as Showgirls and expect to eat lunch in this town again. And don't let the door hit you on the way out.

There's a saying that comedy equals tragedy plus time, and it's difficult to think of a movie that bears this out better than Verhoeven's mercilessly mocked magnum opus, whose fans are currently having the last laugh. Showgirls will screen as part of a comprehensive retrospective at TIFF Bell Lightbox devoted to the director's oeuvre – another step in an ongoing critical redemption that has recast it as a kind of misunderstood masterpiece. At a time when American cinema finds itself wrestling with the themes of grotesque excess in conversation-piece films such as Spring Breakers and The Wolf of Wall Street, Showgirls is not only ripe for rediscovery – it's a candidate for canonization.

For the first 20 years of his career, Verhoeven, 75, was received as a shrewd, subversive satirist. His Dutch productions, from the pungent young-lovers drama Turkish Delight to the hilariously hallucinatory horror-comedy The Fourth Man, tweaked commercial genres until they squealed. The director's reputation as naughty auteur was only consolidated by the success of the archly satirical Robocop (1987) and the overtly ridiculous Total Recall (1990), chrome-plated action pictures that kidded blockbuster tropes even as they expertly delivered the expected payload of gun play and explosions. But 1992's kinky Basic Instinct was a step too far: The erotic thriller scandalized and infuriated audiences to the tune of a $400-million worldwide gross.

Sharon Stone's calculating character got away with murder at the end of Basic Instinct, and in the eyes of many viewers, so did Verheoven and screenwriter Joe Eszterhas – a less PC blockbuster would be hard to imagine. This may explain the hysterical overreaction to their next venture. An affectionate, lavishly produced tribute to studio-era musicals starring Saved By the Bell star Elizabeth Berkley, Showgirls was sacrificed on the altar of pious good taste by critics and pundits looking for an easy target. And targets don't come much easier than a $35-million movie with an NC-17 rating.

When Verhoeven excoriated Reagan-era values in Robocop – a movie set in Detroit and released in a moment when the American auto industry had fallen into an unprecedented funk – audiences and academics alike roared with approval. But the initial reactions to Showgirls were almost entirely humourless. Reviewers mocked Berkley's awkward acting without recognizing that Nomi's character arc, from nubile newbie to discarded starlet, was a veritable allegory of the actress's own experience. It never dawned on them that the tension between Berkley's seeming obliviousness and the expertly stylized performances of Gina Gershon and Kyle MacLachlan, as more experienced showbiz sleazebags, might have in fact been carefully wrought.

Not everything in Showgirls is so easily reconciled: A late rape sequence equals the visceral horror of a similar scene in Verhoeven's much-despised Dutch drama Spetters (1980), and seemingly throws the film's otherwise winking sensibility out of whack. But this alternation between burlesque and brutality has always been the director's MO, and it's meant to give Showgirls some gut-punch power.

The film's final-act transformation into a seventies-style avenging-angel action movie, with Nomi delivering roundhouse kicks to misogynist villains, doesn't just anticipate late Tarantino and The Girl With the Dragon Tattoo: It prefigures Showgirls's own battle for respectability. In the end, Nomi Malone gets her revenge on the people who would write her off as just another hapless, hopeless wannabe. The same can be said for the movie itself.

Paul Verhoeven has basically had two careers, first as a brash young auteur in the Netherlands, and then as a master craftsman in Hollywood. Still, there's a consistency in his work, as these possible double-bills of Dutch and American features prove.

Here are 19th-century Amsterdam and 20th-century Las Vegas, two cities of sin, being conquered by plucky young women at the cost of their scruples. Katie Tippel's fact-based tale of a country girl turned call girl was understood as a critique, while Showgirls's story of a wannabe dancer learning the showbiz rind was dismissed as sensationalism. But both films are ferocious and funny tributes to feminine resourcefulness.

The outbreak of the Second World War arouses the passions of school chums who sign up to join the resistance, but their dreams of glory soon give way to the harsh realities of war. That's the set-up of Soldier of Orange. Substitute millions of CGI bugs for Nazis and you've got Starship Troopers, which mercilessly mocks the militaristic mind-set while still delivering a sci-fi epic.

Gentlemen prefer blondes, even if they're serial killers. The Fourth Man's amusing riff on male commitment-phobia – featuring a potential bride with skeletons in her closet – was updated in Basic Instinct to a satire on Hollywood erotic-thriller conventions. The attraction between Sharon Stone and Michael Douglas is so palpably fatal it's funny.

The wastrel youth in the drama Spetters race motorcycles to assert their studly machismo; by the time Verhoeven makes Robocop, man and machine have merged into a gleaming, seamless hybrid. Spetters's grim imagery led to calls for censorship, while Robocop parlayed its brutality into big box-office millions.

Flesh and Blood: The Films of Paul Verhoeven runs Jan. 24 to April 4 at TIFF Bell Lightbox.

Adam Nayman is the author of It Doesn't Suck: Showgirls, being published by ECW Press in April, 2014. 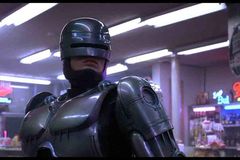 Verhoeven can't resist using cheap Hollywood tricks
April 27, 2007
Follow us on Twitter @globearts Opens in a new window
Report an error Editorial code of conduct
Due to technical reasons, we have temporarily removed commenting from our articles. We hope to have this fixed soon. Thank you for your patience. If you are looking to give feedback on our new site, please send it along to feedback@globeandmail.com. If you want to write a letter to the editor, please forward to letters@globeandmail.com.
Comments