Just a few minutes into our conversation at Ontario Restaurant – the kind of old-school, Formica-countertop diner that, in a different neighbourhood, would have been bought out and revamped to sling haute cuisine – and Marty Thompson, 55, bolts out of his chair to help a hunched, elderly woman with a walker get through the front door.

"I've known that lady 40 years or so, man," he says, plopping back into his seat, "back when she still had full function of herself. Paul, the owner here? I know him. He used to go to school with my best friend's older brother. I know 'em all, man."

In this unassuming restaurant near Dundas and Sherbourne, just a few blocks from the tourist-friendly hustle-bustle of the Eaton Centre and Yonge-Dundas Square, in Toronto's rapidly changing Regent Park, everyone seems to know Thompson. He carries himself with the unarrogant confidence of a true local, radiating an Al Waxmanian charisma. He's the king of Regent Park. Fellow Ontario Restaurant patrons exchange nods and waves of familiarity. Our server calls him by name. The owner shuffles over to personally hand-deliver his soup du jour (tomato), joking, "One soup for Mr. Millionaire."

"What's that about?" I wonder. "Why did he call you Mr. Millionaire?"

"There was a shop on Queen and Parliament," Thompson says. "Called Marty Millionaire. They sold all this old furniture and movie props. That'd been there since day one, a hundred million years."

Marty's no millionaire. But in Regent Park, where he's lived since he was six years old, his local star is on the rise. He's one of the three mains subjects profiled in The Stairs, a documentary by Toronto producer/director Hugh Gibson that premiered last month at the Toronto International Film Festival. The doc deals with drug abuse, the sex trade and the road to recovery in Regent Park, a neighbourhood known for its looming public-housing projects, and long stigmatized by its reputation of poverty and violence.

It's tempting to call The Stairs "a hard look at the epidemic of drug abuse and violence." But that feels a bit cheap. While Gibson doesn't shy away from the realities of the local drug and sex trade, his camera lingering as users huff crack in sunken stairwells, The Stairs rarely feels exploitative, gawking or self-consciously gritty. "To me, it was more about showing an honest depiction of what their lives were like," Gibson says. "It was important to have the community embrace it. And to have the community involved in the filmmaking process, to take ownership of their own storytelling."

Shot over five years, The Stairs feels lived-in and intimate. Gibson explores the issues facing Regent Park locals – in addition to Thompson, the film follows a former sex worker named Roxanne Smith, and Greg Bell, a crack-cocaine user involved in a protracted legal battle against a cop accused of excessive force – through their own stories, never once deferring to dusty statistics or the "wisdom" of academics and policy makers. In doing so, it makes a persuasive case for the power and efficacy of harm reduction: A public-health strategy that focuses on practically minimizing the risks associated with drug use and sex work.

Beyond being the literal poster boy for The Stairs (a profile of his face appears on the film's poster), Thompson's also a harm-reduction success story. A decade ago, he was a full-blown addict, homeless, sleeping in stairwells in Regent Park's public-housing towers. "I woke up on the stairs, Christmas morning, 2007," he recalls. "That was the worst day of my life."

Soon after, he heard of a program called CUP, the "Crack Users Project," developed by the Regent Park Community Health Centre. The pitch was simple: Listen to speakers talk about addiction and recovery, make $20. For Marty, it was a no-brainer. "Twenty bucks?" he exclaims, excited by the prospect even years later. "That's a hit of crack! That's why I went. After the second or third time going, I started listening to these people. … They used to do drugs. I knew they did drugs. I did 'em with them! But now they've gone to college, to university and stuff. I started thinking, Wow. Wow, wow, wow."

Thompson started working with Regent Park Street Health as a peer outreach liaison: handing out clean needles, condoms, pipes, and offering assistance and training in the neighbourhood. Soon he had his own apartment, a cute cat and money in his pocket. "I wanted to prove to the peers, and mainly to myself, that I can do this," he says. "And that they can do it, too. But you can't keep talkin', talkin', talkin'. You gotta do it."

In spring of 2011, filmmaker Gibson was contracted by Regent Park Health Centre to produce two educational videos on harm-reduction strategies. "The idea was to make something they could show to their funders," Gibson explains. "Their funding was threatened. The climate was very different. This was the Stephen Harper-era, the Rob Ford-era. It was not pro-harm reduction."

In 2012, Gibson met with Street Health and members of the community to discuss the idea of making a feature-length film about the area. While everyone was on board, some people worried that a film about the realities of life in Regent Park might be too downbeat. As Gibson remembers, someone at the meeting asked how they could make sure the movie had a happy ending, to which another local responded, "Well, that depends on us."

It's an ethos that defines The Stairs as much as the holistic public-health approach to harm reduction. It's about arming people with the tools and the knowledge to keep themselves, and their peers safe. It's about taking an active, evidence-based approach to community safety and betterment. And at an even more fundamental level, it's about the rights and dignity of drug users, sex workers, the mentally ill, the homeless and others cast to society's, and the city's, margins. For Gibson, it's about "humanizing that which has been dehumanized."

For his part, Marty Thompson hopes The Stairs will drum up neighbourhood excitement for more than just his own star quality. Despite his exuberant charm and outsized personality, he maintains that he normally shies away from attention. "I don't like being the centre of attention," he says, and it's a little hard to believe. "But in this case I loved it. It got the word out there about drug users and the homeless and the mentally ill – that they're people, too, and should be treated with the same respect."

The Stairs plays the TIFF Bell Lightbox Oct. 7 to 13; following the Oct. 12 screening at 6:40 p.m., city councillors and subjects from the film will participate in an on-stage discussion about harm reduction in Toronto (tiff.net). 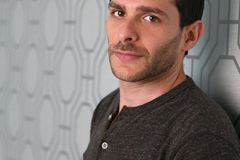 Review
No happy endings in Hugh Gibson’s documentary The Stairs
October 7, 2016
Review
Off the Rails: A sympathetic story of subway savant Darius McCollum
October 7, 2016
Follow us on Twitter @globearts Opens in a new window
Report an error Editorial code of conduct
Due to technical reasons, we have temporarily removed commenting from our articles. We hope to have this fixed soon. Thank you for your patience. If you are looking to give feedback on our new site, please send it along to feedback@globeandmail.com. If you want to write a letter to the editor, please forward to letters@globeandmail.com.
Comments