The film Modra is a simple story of self-discovery that follows a 17-year-old Toronto girl (Hallie Switzer) on a summer trip to the Slovakian town where her extended family lives. She's accompanied by a male classmate (Alexander Gammal), and their teen awkwardness is a large part of the story's charm.

Getting to that level of simplicity takes a great deal of experience. The filmmaker, Ingrid Veninger (whose daughter Hallie stars in the film) is a multi-threat actress, writer, producer and director, who, at 44, has emerged as the DIY queen of Canadian filmmaking. She's the co-writer and producer of the multi-Genie-nominated Nurse.Fighter.Boy. Two of her other recent films, Only (co-directed with Simon Reynolds) and Modra are models of quality on a budget.

"I tend to think the worst in a good way," says Veninger of her self-reliant approach. "I never expect anyone to give me money. I never expect to get into a film festival. And if I can't put myself on the front line, financially and every other way, I can't expect anyone else to go with me."

But over the years, she has managed to build up a lot of what she calls "personal capital" in the film business. At 11, she landed a job in a Bell Telephone commercial along with future Anne of Green Gables star Megan Follows. Many acting jobs followed - close to 100 in total - including television series such as Air Waves and Nikita to the recent Bloodletting and Miraculous Cures, the HBO Canada TV series based on Vincent Lam's book. Acting remains one of the ways she supports her filmmaking habit.

In 1989, she decided to move into producing. She optioned the Margaret Atwood novel Cat's Eye for a film. She worked as assistant director on Atom Egoyan's 1991 film The Adjuster. Through songwriter Jane Siberry (her husband John Switzer was Siberry's bassist and record producer) she met filmmaker Peter Mettler and ended up producing his documentaries Picture of Light and Gods, Gambling and LSD.

Eight years ago, she started her own company, pUNK Films, with the ambitious motto "Nothing is impossible." The company has already made six shorts and four feature films, including Only and Modra. She made Only, starring her son, Jacob, as a boy who has a chance encounter with a girl at a motel in Parry Sound, Ont., for $20,000 by maxing out four credit cards. She used a borrowed digital camera, and everyone in the cast and crew was paid a flat fee of $100. She submitted a DVD to the Toronto International Film Festival (TIFF) where audiences and reviewers were enthusiastic. Invitations to other festivals followed.

"Only at that point did I go to Telefilm and their alternative distribution program and said, 'Look - we've definitely got something here. Can you help us?' We got some money for a website, a small trailer and posters, and some travel money."

In Canada, she served as her own distributor, phoning theatres, negotiating the split between exhibitor and distributor, putting up posters and drumming up all the local media attention. At a festival in Rome, the director of the Milan Cinematheque liked Only so much he acquired the film for theatrical distribution in Italy, and ran it for a week at his own theatre, between retrospectives of Robert Bresson and François Truffaut.

Veninger's efforts weren't all successes. She paid €500 to have her film in the Cannes International Film Festival market. She had one screening and one audience member - a woman who sat down, removed her boots and slept through the entire 73-minute film.

Making her new film, Modra, which started as a family holiday plan to visit the old country, was a comparatively lavish project. The official budget is $250,000 (the minimum required to gain access to Telefilm Canada's low-budget feature-film assistance program). The cash cost was half that, and if she factors in the post-production favours she got, the actual budget could ballooned up to a million.

After a successful run at major festivals in Vancouver, Toronto and Halifax, Modra was picked up by Mongrel Media for national distribution in Canada. The film also ended up on TIFF's list of Canada's Top 10 and won a People's Choice Award at a film festival in the Slovak capital of Bratislava, the city where Veninger was born.

At this point, you might imagine she could relax. Instead, for the next 10 days, she'll be at every screening of Modra at the Royal Cinema in Toronto for question-and-answer sessions with the audience. But because she can't be everywhere, she also paid $4,500 to send her parents on a train trip to Vancouver, where the film is also screening. Helen, 66, and Frank, 77, will bring 10,000 postcards, 1,000 posters and 300 buttons. Her mother, dressed in traditional Slovak costume, will handle the Q and A's at Vancity Theatre while Ingrid does the Royal in Toronto.

"My job as a producer is to do everything possible to get bums in seats," she says. "If I could drive people to the theatre I would. Instead, I'm out there with postcards and bugging people in bars and reminding them every time I get a chance when the film is on. The director part of me asks, 'Ingrid, isn't this a bit embarrassing?' The director would rather be off somewhere sipping a latte."

FILM ON THE CHEAP

In both Modra and Only, Ingrid Veninger used her children as the stars. In Slovakia, the extensive cast included her uncle Imrich (whose band Bukasovy Masiv provides music in the film) and her 96-year-old great aunt Jozefina Ochabova played Great Aunt Josefa. Working for five weeks, at times she subjected them to up to 25 takes. They were patient, as only relatives could be.

Says Veninger: "I like to find any of the young filmmakers coming out of York, Ryerson, George Brown, Seneca or wherever, because they're looking for experience. I can't make anyone rich, but I can promise them an adventure." 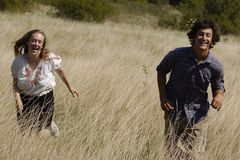