Survival of the Dead

George A. Romero reinvented the zombie movie with Night of the Living Dead (1968), offering what has become a permanent screen nightmare - flesh-hungry ghouls coming at us in slow-mo, endless file. In Dawn of the Dead (1978), he had a further thought: The film is set in a suburban shopping mall. North Americans are already dead, victims of a ravenous consumer society, the director seems to be joking.

We're all doing the zombie shuffle.

Romero's first horror movies were startling, provocative stuff. But it could be argued he painted himself into a coffin corner early on. Really, he'd pretty well said all that he had to say about zombies in his first pictures.

The Pittsburgh filmmaker gets in a few fresh takes on old themes in Survival of the Dead, his sixth visit to the land of the no-longer-living. There's a small, wickedly funny scene where a zombie hunter picks off a grisly grey postman staggering through work, delivering mail (dead letters?). Elsewhere, a character offers a thoughtful explanation why there's a surplus of zombie movies these days: "Lousy times make for lousy people."

Which leads us to Romero's greatest artistic challenge: There are so many imitations of his work around, from Shaun of the Dead to the recent Night of the Living Heads, that the poet laureate of the undead would seem to have been rendered unnecessary.

It doesn't help that Survival of the Dead gets off to a confusing start. We're on an island off the coast of Delaware, caught in a feud between the O'Flynns and Muldoons. It's never made clear why the families talk like they're in an Irish Spring commercial. Or why their workers sound like John Ford cowpokes. Besides which, shouldn't the film be set further north in New Hampshire? Where license plates read, "Live free or die."

Despite the film's spinning geographical compass, Survival of the Dead has an interesting premise: One family, lead by Patrick O'Flynn (Kenneth Welsh) believes zombies are to be killed. The other clan, run by Seamus Muldoon (Richard Fitzpatrick), takes a spiritual view. The Muldoons chain their undead up, tending to their souls and waiting for a cure (while getting their cooking and housekeeping done free by grunting slaves.)

But just as we seem to be entering what might be a fruitful religious/cultural debate, O'Flynn is expelled from the island and the movie is hijacked by a mercenary crew of photogenic younger actors who take us on a zombie-hunting and fishing trip.

The middle third of the movie is standard zombie action stuff, save for a scene that finds one of the photogenic younger actors swimming for his attractive life in a sea of thrashing, underwater zombies.

That all of this happens in and around Port Dover, Ont., and involves Canadian actors we've seen for years in TV fare such as The Littlest Hobo and The Red Green Show is something of a kick. George Stroumboulopoulos (still working for the corpse) appears as a daft TV talk show host. And Welsh, a terrific actor, has great fun hamming it up as Paddy O'Flynn.

Still, even Romero's staunchest fans might conclude their hero is going through the motions here. Yes, almost like a zombie.

Survival of the Dead plays at the Toronto Underground Theatre until Aug. 26 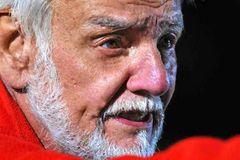