This week, the Toronto International Film Festival announced its annual list of Canada's Top 10 – the best Canadian movies of the year, in TIFF's opinion. The list included much-discussed films by David Cronenberg (Cosmopolis) and Deepa Mehta (Midnight's Children), as well as the transgendered love story Laurence Anyways, and the comedy My Awkward Sexual Adventure. If you don't know those last two, you have plenty of company. Laurence Anyways played a few Canadian theatres for three weeks, and My Awkward Sexual Adventure is still on the festival circuit, with no theatrical release in sight till next spring.

TIFF says that Canada's Top 10 "is intended to raise public awareness of Canadian achievements in film" – a polite way of saying that most of us are slow to notice when good films are made here. But maybe the trouble is that nobody tells us about them till way too late in the process.

That's the word from Vancouver digital entrepreneur J. Joly, who says that filmmakers ought to build their audiences before they shoot their pictures, not after. To test his case, he has launched CineCoup, a one-year "film accelerator" that gives social media a starring role in film production.

Any three-person team with a two-minute trailer and $150 can sign up from now till Feb. 21 for a 17-week program that will run participants through a series of competitive "missions," designed to build a following and refine film ideas. By the end of June, one team will emerge with up to $1-million in funding (from private sources and tax credits), six months to make a film, and a release in Cineplex Odeon theatres in January, 2014."My whole disruptive model is based on getting filmmakers to focus on audiences first," says Joly. "It's not an afterthought to making the movie."

CineCoup is an unusually audience-aware part of a small but vigorous movement toward what could be called dramatized or impatient filmmaking. Filmmaker Ingrid Veninger's recent 1K Wave: $1,000 Feature Film Challenge was also about vaulting over the steep cash barriers that often deter or delay filmmakers. (The next 1K Wave will be announced later this month.) The 48 Hour Film Project, which challenges people to make a movie in that time, has iterations and imitators around the world, including Bloodshots, the festival of 48-hour horror shorts that screened at Vancouver's Rio Theatre on Halloween. Joly's twist on these speedy, rule-based ventures is to put up more money and get the marketing into the process from the beginning.

"If we can get Canadians to fall in love with Canadian filmmakers early," he says, "we believe we can be the Oakland A's to the New York Yankees of the big studios."

Joly's moneyball strategy came out of his experience with such Web-business incubators as Vancouver's GrowLab and Bootup. Rather than pour in all their money at the start and then look for customers, those tech types tend to "speed to market with a minimal viable product," Joly says. "You're not too precious about the idea; you just want to get it in front of people, test it and iterate on it based on feedback."

His eureka moment came, he says, when he realized you could do the same with a film trailer and a few social-media accounts. Put the concept before your immediate community and beyond, take note of who responds and why, and you can build your project and "audience equity" at the same time.

The goal, he says, is not to make a commercial film in the usual sense, but a desired film. "If the audience decides that it wants this cool doc made by these people in their fifties who somehow connected with all these Canadians, that's the movie I'm going with," he says.

The first nine weeks of the CineCoup process are devoted to getting the competing projects noticed and talked about on social media, and building from whatever lessons are learned there. Every three weeks, "social voting" on the CineCoup website will determine who stays in the running for the $1-million – but nobody, says Joly, is booted off the island. If a team's audience reach takes off, it's still possible to get back in the process as a wild card.

"We're not a contest, just a competitive, tough-love studio model that's very transparent," Joly says. "But instead of having these filmmakers run around looking for capital, we're saying, 'The money's here. Just concentrate on building up your audience equity.' "

Joly, who worked in Toronto as a film reader and script doctor, doesn't even want to see a script till he's down to the final 15. The final 10 are expected to launch their own crowd-source campaigns: to top up their funding, bankroll a particular actor or special effect, and prove that their audience is willing to do more than like them on Facebook.

"Is it a real army that will be the bums in seats, or is it a ghost army?" Joly says. "That's when you go back to your army, and see if they'll invest some money in you."

He'll offer all 10 finalists a two-year option on their projects, for $2,500 – the first cash they'll see in the CineCoup process. But he'd be delighted to hand off nine of those projects to any other producer who could help make the films.

"I can only do one this time," he says. "My blue-sky scenario is that I just turn these other scripts around to another producer. I don't want to hold onto nine other scripts and watch them burn out."

The Web infrastructure for CineCoup will come from dimeRocker, a cloud-based platform Joly developed for social TV and "transmedia experiences." Its most visible projects so far have been the 2011 version of CBC's Kraft Hockeyville site, and the online component of the network's Cover Me Canada. Joly will be combing through every CineCoup contestant's social-Web metrics, looking for patterns of viewer interest, hot spots on the national map, and audiences for the future.

"The phase two of this is that I'm building one of the most granular databases of film fans across Canada," he says. "I'll know what kinds of movies they like, where they are, who their friends are. I can then go back to really great Canadian movies that never got released or didn't find an audience, and I'll know where their audience is. If you're the first person to get that social database, and you deliver on that social contract, you win."

He insists that there will no losers from CineCoup. Every project will get a little further along, he says, and their CineCoup microsite will stay active for two years – an asset that will put "a little more gas in their tank" while they look for other avenues of production.

The real plum, of course, will be if CineCoup's first produced film takes off. That would validate Joly's approach, and be a rallying point for every other impatient filmmaking project.

"Who knows, CineCoup could be the birthplace of the next Beasts of the Southern Wild," says Veninger, referring to the small, neighbourhood feature film that is landing on some critics' best-of-year lists.

No doubt Joly sees something like that in his blue-sky scenario. But indie filmmaking has such low visibility in Canada, he figures he can score without necessarily hitting a home run. "There are so many movies made in this country that never make it to a theatre," he says. "I hate to say it, but the bar is so low now that the worst I can do this year is as good as everybody else."

Who needs publishers when you can pitch a book on social media?
February 22, 2012
Social networks own us all – it’s time we returned the favour
October 5, 2012 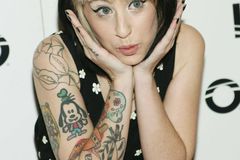 John Green on writing, and on building an online community
January 30, 2012
Follow Robert Everett-Green on Twitter @RobertEG_
Report an error Editorial code of conduct
Due to technical reasons, we have temporarily removed commenting from our articles. We hope to have this fixed soon. Thank you for your patience. If you are looking to give feedback on our new site, please send it along to feedback@globeandmail.com. If you want to write a letter to the editor, please forward to letters@globeandmail.com.
Comments