When Margaret Atwood delivered her five Massey Lectures on debt – exploring debts to society, how they can be measured, how they govern our interactions – the timing couldn't have been better. It was exactly when all hell broke loose on Wall Street.

"By some eerie astronomical, astrological coincidence, that very moment was when the great, big October, 2008, financial meltdown was happening," Atwood says with her shoulder-hunching laugh. "Which meant that …"

Those lectures became Atwood's bestseller Payback – and now a documentary by Baichwal ( Manufactured Landscapes, Act of God) that opens in select cities Friday.

Like the book, Payback isn't about mortgages or complicated financial derivatives. Instead, Baichwal continues Atwood's line of high-minded questioning and looks at debt tied to everything from an Albanian blood feud to Florida tomato farmers.

But first, the lectures: Atwood kept turning down invites from the Massey organizers. "I'm washing my hair," she jokingly remembers. But when the book rights for the long-standing lecture series threatened to go to Penguin and away from the House of Anansi Press, with which Atwood has a long attachment, she made a promise.

"I wrote a letter to Massey saying that if you do this dreaded bad thing, I will never, ever give a Massey lecture," she says. "And then they didn't do it, so I had to do the Massey lecture. It was that kind of exchange. I was morally obligated."

Atwood and Baichwal sat down together in Toronto recently to talk about such obligations, the broader implications of debt – and how Conrad Black ended up in Payback.

The Massey Lectures are just one example of how debt is often not about money.

That's where the stories in the film came from: It's a riff on "What is debt?"

In other words, debt invades our decision-making on multiple levels?

Atwood: Something that's always intrigued me about the Victorian novel – which was my field of professional training long ago when I was an academic – is that most people study the front of the stage, which are the characters, the marriage or actions, without looking at the back of the stage, which are the financial arrangements in these novels. But once you start looking at the financial arrangements, you realize they are all based on that – including Jane Austen, Wuthering Heights, all of George Eliot, Thomas Hardy, you name it.

How much money and how they are making their money permeates Dickens.

And Madame Bovary. The fact is that if she hadn't been a shopaholic, she could have kept on committing adultery to her heart's content, and nobody would have noticed. They only notice because she goes into debt and the guy to whom she owes the money turns up and says, Now I'm going to go to your husband and tell him everything. But if she hadn't gone into debt, she would have been fine.

Is debt inevitable then? Do we always owe someone, in one sense or another?

Atwood: No, no, you don't have to go into debt. But if you do go into debt, it's a story, you fall into it, you climb out of it.

Atwood: Yes, it's very much depicted as a hole, a bad kind of debt. But there are good kinds of debt.

Baichwal: There are debts that can't be paid with money. When you think about the thousands of complex interactions that we engage in every day with other people and with the world around us, there's always this kind of giving-taking relationship going on.

Baichwal: So, if you do a favour for someone, most people then think I can call on that person to do a favour for me. You can't really think of life without these complex tallying situations that we seem to be involved in all the time.

Atwood: And we're not thinking about it consciously, but when somebody violates this, we feel it's not the usual thing.

Baichwal: You open a door for someone, and they don't say thank you.

Atwood: I'm a little old lady now. When somebody puts my bag up overhead in the plane, if I didn't say thank you, what a jerk I would be.

Unpayable debt, though, can be deadly serious. In the film, you touch on a blood feud in Albania after a farmer shoots his neighbour.

Baichwal: We talked to a number of people in Albania, and one of the reasons it was so powerful to me is that you have this totally desperate situation of one family. But it felt like something that could be resolved relatively easily if there wasn't this sense of deep entrenchment on both sides.

In the mind of the guy who was shot, that debt can never be repaid. He says himself that the reason he didn't get plastic surgery to fix the scars so that they didn't look so bad was to remind himself everyday of the debt that is owed him.

Or there's the Gulf oil spill – we don't even know what that debt is. We won't know for 50 years what the debt to that ecosystem is, and it may go on even longer than that. The fact that there was even a financial figure attached to that was kind of ludicrous. They've paid out to the lawsuits, and the fishermen who couldn't fish, and the restaurants that have lost money and all of that within the language of financial exchange. But the vast part of the debt has nothing to do with money, and that is an interesting conundrum.

It can also create a feeling of helpless. Do you see this relating to the Occupy movement?

Baichwal: The Occupy movement is interesting because, by its very nature, it seems to me to be a witnessing movement. It's a movement that just by the very fact that it exists is calling witness to something that most people have no control over – the perception that we have no control. Calling witness to it is in itself an act of control, which I think is very powerful.

In the film, we see the hardship faced by tomato pickers and the Coalition of Immokalee Workers – who stood up for themselves and markedly improved their work conditions. We see a clash of conscience between the companies buying and selling the tomatoes, and the desperately underpaid, overworked labourers.

Atwood: We think of class solidarity as being a working-class thing, but there's class solidarity at the millionaire-billionaire level too. You can be viewed a traitor to the club if you make any change: "Why did you pay? It's un-American to pay workers one cent more."

Baichwal: One penny a pound more was un-American. These workers are people living on $5,000 a year or less. This was a story of paying back. They still have a long way to go, but believe me, these things are giant steps.

And in exploring debts to society, the film also includes an interview with Conrad Black.

Atwood: And what a good sport he was.

Baichwal: Most people, when they think about a prisoner or someone paying their debt to society, they have a very particular kind of person in mind – somebody who is downtrodden, from the wrong side of the tracks and who is on the other side of the law for that reason. I just thought it would be interesting to have the juxtaposition between two very different people – between Black and a perpetually incarcerated, repeat offender – who are undergoing the same kind of process of paying their debt to society, whatever that means.

This discussion transcript has been edited and condensed. 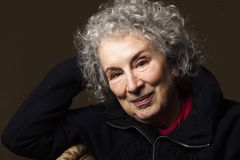 Margaret Atwood's old-fashioned approach to debt
September 26, 2008
Follow Guy Dixon on Twitter @Guy_Dixon
Report an error Editorial code of conduct
Due to technical reasons, we have temporarily removed commenting from our articles. We hope to have this fixed soon. Thank you for your patience. If you are looking to give feedback on our new site, please send it along to feedback@globeandmail.com. If you want to write a letter to the editor, please forward to letters@globeandmail.com.
Comments