Is there anything at once so forward-looking and so retro as a James Bond film? Consider for a moment the Sony Ericsson cellphone used in Tomorrow Never Dies, which sits, the size of a hot-dog bun, near the beginning of the new exhibition Designing 007: Fifty Years of Bond Style.

All right, perhaps not quite the size of a hot-dog bun; perhaps it just seems that way compared to today's whisper-thin phones. Or perhaps it was that big because it also contained a 20,000-volt stun gun and a fingerprint scanner. Bond, James Bond, does not use his phone to order pizza.

In either case, it must have seemed extraordinarily sleek at the time, in the technological Jurassic of 1997, and Sony used Tomorrow Never Dies as a sexy launch pad for the phone. Now you look at it and think: Bond, why were you holding a hot dog to your ear?

It is the curse of the James Bond franchise, or perhaps its blessing, to exist in the future and in the past, but never in the present. Its production design, costumes, and especially its extravagant electronic props are meant to hint at a world that's right around the corner. But its sexual politics and lone-wolf-versus-the-universe narrative pull us back into a different time: less ambivalent, less confusing, probably a lot more fun.

The now-and-thenness of Bond is displayed in Designing 007, co-curated by Toronto native Bronwyn Cosgrave and Lindy Hemming, costume designer on five Bond films; it's currently at the Barbican Centre in London, a space so in sync with the Bond aesthetic (part nutcase's lair, part Stalinist prison) that it featured in a scene in 2008's Quantum of Solace. The exhibition's next stop is Toronto's Bell Lightbox, from Oct. 26 to Jan. 20, 2013.

To celebrate this October's 50th anniversary of Bond on screen, producers EON have opened their archives of gadgets and props, costumes and production designs, and the result is a fantasy tour of women who never wore sensible underwear, and villains whose prosthetics were almost as deadly as their hats.

Remember fur? No, neither do I. But here is fur, separated from its former animal occupant, and draped over Domino Derval (Claudine Auger) in Thunderball. There was a time in the fictional Bondscape when women wore fur capes to casinos; exploding lighters were useful because people actually smoked; and the word "laser" was spoken without irony.

There was also a time when outer space represented optimism, the prospect of colonizing far-distant worlds because we could, and not because we'd blighted the world we already had. In the Moonraker display, the future is shiny-bright, with Roger Moore's Bond and Drax's hench-nauts floating through space as if they'd just popped out of a toy spaceman kit.

When Ian Fleming published Casino Royale, his first James Bond novel, in 1953, space would have seemed hardly more exotic than his other locales: Japan and Istanbul, Las Vegas and Geneva. For film audiences watching the film version of Dr. No in 1962, when international travel was still the preserve of the fur-hatted, baccarat-playing few, Jamaica must have seemed impossibly far away.

"Fleming was an aesthete; he came from a rarefied world," says Cosgrave. "But he didn't inherit enough money to not do anything, so he had to work. He found his niche by showing the masses how to live like an international playboy who went to public school. James Bond became a role model for a lot of people."

When you think of the improbable names in his fiction, consider that Fleming's world was filled with people called Lancelot Hugh-Smith and Biffy Dunderdale. It took the former intelligence officer only eight weeks to write a novel, a terrifying figure for anyone who's tried to wade through the quicksand of fiction writing, but then he had martinis to drink and golf to play. On display in Designing 007 is a letter from Fleming's publisher to Richard Chopping, who created the fey/macabre book jackets, requesting equal hustle: The painter is given a mere two months to design a cover for Goldfinger out of "a skull and some lumps of gold and a few odds and ends like that."

Speaking of haste, Ursula Andress's eye-popping bikini from Dr. No was literally fashioned overnight, or at least the top was, out of the actress's own bra. (That swimsuit is on display here, as are Sean Connery's and Daniel Craig's trunks, in the interests of equal-opportunity ogling.) One of the greatest sets, the Crab Key lair of Dr. No, was similarly slapdash: It was imagined, built and rebuilt over the course of a day by the brilliant designer of seven Bond films, Sir Ken Adam.

For the most part, though, excruciating attention to detail is the Bond hallmark, especially as the productions got larger and more lucrative. Q's gadgets are designed to actually work, though not, presumably, to kill. Bond's medical records are on display – a certain Dr. Warmflash operated on his shoulder, while another doctor records his appearance: "Well developed, well nourished." His passports are here, too, demonstrating that he is indeed a man out of time. When he was played by Timothy Dalton, he was born in 1948; Pierce Brosnan's Bond, in 1960; Daniel Craig's spy was born in Berlin eight years after that.

At the Barbican, the crowds stop and gawk at certain props, the way medieval pilgrims might have bowed before bits of the true cross: the 1964 Aston Martin DB5 from GoldenEye; a rotating bed featuring the lifeless but fortunately plastic body of Jill Masterson (Shirley Eaton), gilded to death in Goldfinger; the (literally) kick-ass shoes Rosa Klebb (Lotta Lenya) wore in From Russia With Love.

But the most arresting images are actually much smaller, tucked away on the walls. They're Ken Adam's stunning drawings from the 1960s and seventies for villains' lairs and megalomaniacs' laboratories and tycoons' casinos, which look remarkably like the lobbies of luxury hotels you'll find around the world, circa 2012. The past catches the tail of the future, but somehow James Bond is always above it all. 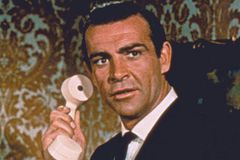 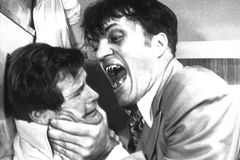 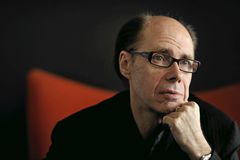 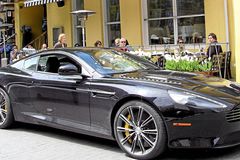 Guy guides: nostalgia for when men were masters of the universe
April 13, 2011 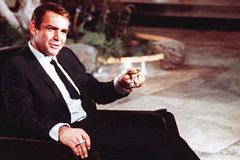