Even his real-life heroics seem a touch bizarre. Last week, director James Cameron sank lower than any lone man has ever sunk before. Cocooned inside his high-tech submersible, Cameron plunged down through the Pacific Ocean almost 11 kilometres to the nadir of the Mariana Trench. And what did he feel upon hitting rock bottom? In his words, "complete isolation from all humanity." And what did he do next? Well, like a gentleman explorer of yore, he returned to his day job – hopping on a plane, putting on a tux and hobnobbing with the swells at the 3-D premiere of the movie Titanic, whose re-release neatly coincides with the approaching 100th anniversary of the fate that befell the actual Titanic. Onscreen, Cameron has always been a master at wedding technology to plot. Apparently, the guy is no slouch off-screen either – his fact is starting to mirror his fiction.

Of course, the Titanic sinking is a tale of hubris, a tragic flaw for which our boy from Kapuskasing would seem an ideal candidate. After all, from Aliens and The Terminator series onwards, his cinematic career is itself a story of building ever bigger with ever-fatter budgets, daring the gods of the box office to cut him down. But no. The gods love the man – last year, his Avatar surpassed his Titanic as the highest grosser in movie history. Sure, Oscar has occasionally snubbed him (once for his ex-wife Kathryn Bigelow), but in a business where money talks, and where his films are the top gabbers of all time, a slight from Oscar is just that – slight. So far, Cameron has treated hubris like a bad plot device, and terminated it. He hasn't fallen yet. And when he does, down to the Trench's utmost depth, it's with a purpose – even his descents are heroic.

Or are they? Here's the bizarre twist. In his aquatic adventure, the self-proclaimed King of the World became the King of the Underworld, a mantle of a very different hue that comes with a whole other set of cultural baggage. Archetypally, in life no less than literature, we prefer our explorer heroes to travel outward and upward – to the New World, to the Poles, to the summit of Everest, to the moon and beyond. Yes, beyond is the key word here. They are venturing beyond us, beyond themselves, toward something other in an outer space. The something may prove dangerously alien, but that's precisely the heroic point. It's alien to us. These explorers are escaping our past and striking out for new territory.

But flip that archetype around, and the picture that emerges is a lot more ambiguous. We're not sure what to make of explorers who exchange an outward and upward journey for a downward and inward plunge. That's an entirely separate and more freighted trip. Dante went there, as did Freud, along with all those modern novelists whose heroes became anti-heroes the moment they started digging deep into their dark psyches. However intrepid, these adventurers aren't moving beyond themselves but within themselves, not escaping to outer space but burrowing into an inner space. And if you're seeking the literal equivalent of inner space, look no further than the depths of the oceans. Their waters are our birthright. Astronauts fly off into the future, to places we've never been before; oceanographers dive down to the past, into the primal place from whence we came.

Cameron's love of the underwater began in his first movie, Piranha II: The Spawning, and bloomed during his shooting of The Abyss. A physics major, he became a skilled oceanographer, soon adroit enough to trade in cinematic monsters for ships' corpses – filming the remains of the Titanic, and later the Bismarck. Unlike Jacques Cousteau on his sunny Calypso, who portrayed the deep as a natural wonder and a handy repository for his Gallic charm, Cameron has never shied away from the morbid. When he shows us the ghostly sight of the sunken Titanic, eerie beauty competes with ugly knowledge, the gleam of the surviving dinner plates with the absence of those long-dead passengers.

And now he's descended as far as any human can. Always the director, he packed lights and cameras for the occasion. Always the publicist, he pitched the trip this way: "The last adventure that's really exciting for us, that's unmapped and unseen, is the deep ocean." Problem is, his language would later belie that excitement. Upon returning from his down-and-in odyssey, the explorer talked of a "yawning chasm"; of a "vast, black unknown"; of a "featureless" and "very lunar, very desolate" plain.

Lunar in look maybe, but not in mood. When Neil Armstrong made his one giant leap for mankind, mankind felt euphoric and communally wrapped in the banner of striving humanity. But when Cameron made his giant plunge, he felt a "complete isolation from all humanity." In other words, his light illuminated the inner darkness only to reveal more darkness, and down at the core of mankind's birthplace, the brave explorer found nothing but … profound loneliness. A scary discovery indeed.

On a happier front, Cameron may include this footage in an Avatar sequel, and will surely release a 3-D documentary of his descent. There, expect his language to soften and the darkness to brighten. No doubt, too, the plot will grow more commercially palatable and get wedded again to the wondrous new technology. In fact, that's already happening. According to news reports, even when propelled by his high-tech cocoon to the very pit-bottom of desolation and loneliness, James Cameron was still "able to feed his Twitter account." Now there's an unalloyed hero for our time. 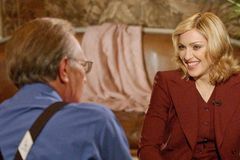 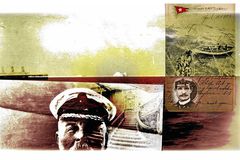 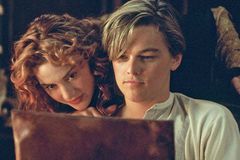 James Cameron's Avatar: A symphony in blue and green
December 18, 2009 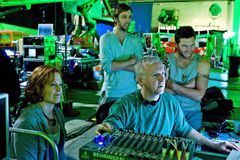