Although often associated with his stoned, laid-back character The Dude from The Big Lebowski, Jeff Bridges is no stranger to rootin'-tootin' lawmen, from "Wild Bill" Hickok in 1995's Wild Bill to Deputy U.S. Marshal "Rooster" Cogburn in 2010's True Grit to Roycephus Pulsipher, in R.I.P.D., from 2013. Now, he stars as a soon-to-be-retired Texas Ranger in the rural heist film Hell or High Water. The Globe spoke with the charismatic Bridges from Los Angeles about the romance of robbing banks, the cynicism of modern times and going out guns a-blazing.

After watching Hell or High Water, I walked into the lobby of the theatre and noticed a bunch of framed pictures of old movies, including Dog Day Afternoon and Bonnie and Clyde. Robbing banks is a nasty business, so why do we love the films and root for the robbers?

Well, one of things that drew me to the script is that it rang so authentic to me. I felt the writer, Taylor Sheridan, really knew what he was talking about when it came to the Texas Rangers and chasing bank robbers. It felt real to me. But also I was drawn to the ambiguity of the story, this whole examining of right and wrong. You know, what's right is not as clear as people think. In the case of this movie, the banks have the law on their side, but is it right to loan money to people who you know can't pay it back, and then to take their homes?

But is there really moral ambiguity when it comes to robbing banks?

It's not right to steal. But look at the bank's behaviour, too. They might be responsible as well. But this is interesting to me, and I think perhaps why people root for the bank robber is that they can relate to that frustration. And also, in this film, Chris Pine's character is robbing banks for his family.

The movie is being seen as a modern-day western. Some of the same themes of frustration were part of another western you were involved with, Heaven's Gate, right?

It's an aspect of human beings. We have this greed aspect to us. Heaven's Gate was about the West and the Johnson County Wars. In those days, it was the cattle barons instead of Big Oil that ran the show. The movie was about assassins who were hired with the blessing of the president of the United States to come and kill all of the immigrant settlers who were eating cattle in Wyoming. It's that same kind of mentality that we have to deal with, and it's movies like Hell or High Water and Heaven's Gate that shine a light on that.

That frustration was a big part of the primaries and the current U.S. presidential election campaign. The whole idea of the little man's hardship in a system that is rigged.

Yeah. I think one of the big battles, and a battle I wage within myself, is with cynicism. To just throw up our hands and say that the system is rigged, that it's always going to be rigged and that there's nothing we can do about it. I think that's a real danger. We have to remain engaged, and do our best to figure it out.

Changing the subject, do you know the singer-songwriter Billy Joe Shaver?

No. I'm a fan, though. He's a wonderful songwriter.

Somebody asked him about you, around the time you starred as a country singer in Crazy Heart. He said you were a hero of his.

I bring him up, because he's on the Hell or High Water soundtrack and your character reminds me of him. What went into developing your lawman mannerisms?

I was very fortunate to have Joaquin Jackson come and visit the set quite often. He's a very famous Texas Ranger, who just died a couple of months ago. Hanging out with him really helped a lot.

Your lawman character in the film is about to retire. You're 66. Do you ever think about hanging up your holster yourself?

Well, unlike the Texas Rangers, where it's mandatory that you get kicked to the curb at a certain age, actors can work right up until their deathbed if we choose to. But retirement, wow. I've got a lot other interests, besides acting. I've started this music deal, kind of late in life. I'm realizing this high school dream at 66. It's a lot of fun. I have a band called The Abiders, and we go out and play. My daughter Jessie often plays with us.

There's a line about your lawman character dodging retirement in a blaze of glory, which is to say dying on duty.

Right. [Laughs.] You know, I like this idea of retiring, not so much as stopping working. Putting on a new set of tires and going off-road. I guess I'd rather fade away than burn out. 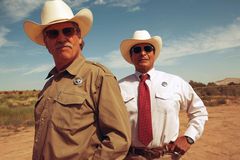 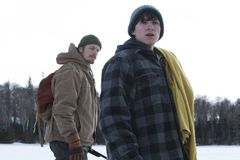 Film Review
Ben-Hur is an expensive lesson in how not to make a modern biblical epic
August 18, 2016 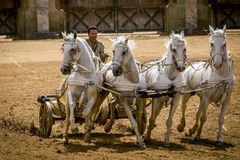