Johanna Schneller
Special to The Globe and Mail
Published October 3, 2014 Updated May 12, 2018

If you have to be typecast as something, "beacon of hope" isn't bad. During a private press conference at last month's Toronto International Film Festival, writer-director Jason Reitman and actress Jennifer Garner got to bantering about why he casts her in uptight roles – first as Vanessa in Juno, who yearns to be a mother; and now as Patricia in the new drama Men, Women & Children, who's determined to (over)protect her teenage daughter from the perils of the Internet. (The film opened in select cities on Friday.)

"Most people think my characters are unsympathetic," Garner says. "People say to me all the time, 'Does Jason –'"

"Does he see something in you that we don't?" Garner finishes.

Reitman turns to the audience. "There is a darkness in Jen Garner," he intones. Then he guffaws, and keeps talking.

Garner's characters, he admits, may be "earnest, hopeful types in a callous world, where everything is going down around you." It may be easy to mock someone who's earnest and hopeful, as each film does at its outset. "But by the end of each," Reitman says, turning to Garner, "you are the sign to the audience that no matter what we're hit with as humans, we'll find a way through. That there is a sense of humanity to us that is unbreakable."

When Garner and I split off for a separate interview, the earnestness continues. Her vibe is bake-sale-mum, all strong jaw, shiny hair and perfect posture. A lot of it comes from her voice, which is high and sweet, and the way she enunciates each word. Proudly square, she uses phrases like "going to hell in a handbasket," is scrupulous about saying "thank you" and orders plain oatmeal at breakfast interviews.

She says she loves to cook for her husband of 10 years, actor-writer-director Ben Affleck, and their three children, aged eight, five and two. She calls herself "the old-school, fogey auntie who sends the best care packages to camp." Her only requirement is that she has to receive a real letter in return. "I will bribe for actual connection," she says. Had I not met Garner's mother a few years ago – a woman so warmly sincere, so bursting with wholesome values, that she makes her daughter look like a biker chick – I would find Garner, 42, almost too good to be true. She even confuses the websites Tumblr and Tinder.

"My fears about the Internet are so vast that we don't have time for me to list them," Garner says. "This new world of technology – nobody is ahead of it as far as parenting is concerned. So this film is properly horrifying. Obviously, Patricia goes overboard, but she's not all the way wrong."

The Internet at the Affleck-Garners is still under her control. A parent has to be present, and her children have to ask. "But we're a hair's breadth away from our daughters being at a friend's house and nobody there to police it," Garner says. She knows a consultant in L.A. who advises families about the Internet, and she plans to make an appointment with her in the coming year, "to come have dinner with my family and maybe a bunch of the kids' friends, and sit and talk to us," she continues. "But there's only so much you can do."

Garner knows she can't give her kids the same sense of community she grew up with in small-town West Virginia, where she took ballet lessons in the afternoons, acted in local theatre in the evenings and went to church on Sundays. Everyone waved hello to everyone else, and if her mom wasn't home after school, Garner would go to a neighbour's and have cake. Still, she tries.

"Our whole lives are about, How do we infuse our kids' life with that sense of community, in a world where it doesn't happen as naturally?" Garner says. Her children's school is "great and age-appropriate." She and Affleck – whose latest film, Gone Girl, also opened this weekend – try to take turns working; he took much of the past year off so she could do four movies in a row (Draft Day, opposite Kevin Costner; Alexander and the Terrible, Horrible, No Good, Very Bad Day, which opens Oct. 10; Men, Women & Children; and the upcoming Danny Collins, opposite Al Pacino).

"But Ben's movies are so big," Garner says. "Batman was six or seven months, and if he's directing, it's a year and a half. So we can't take turns all the time. But I'm in the sweetest working-mom spot in the whole world. Believe me, I know that, and I don't take it for granted. When I do work, the decision is very pure: I have to not be able to say no. It has to work for my family, it has to be a director I want to work with, it has to be well-written. And that's really the way an actor should make any decision."

A 10-year marriage is long for Hollywood, and Garner is often asked how she and Affleck manage it. But she's loath to offer advice. "We're in the thick of it," she says, shrugging. "Our kids are little, our careers are big, our lives are huge. We just focus on what's important, and staying friends. We have all the other stuff, too, but if you're going long, friendship has to be at the base of it. I'm pretty happy. I look around at other couples and think, 'We're doing okay.'"

She's especially grateful to Halle Berry for championing California anti-paparazzi legislation that "gave us our lives back," Garner says. "I'm aware of how rich I feel when I can smile at a stranger on the street and they smile back. Having that in my life again means a lot to me. We went 10 years where I never had a normal conversation, because nobody can talk to you when there are a dozen aggressive men with big cameras in your face, giving you heart palpitations."

Just don't look for Garner on social media. "I don't understand what I would have to offer that I would be willing to give," she says. "I would certainly never pimp out my children or talk about my marriage. And I have no interest in feeling guilty about not answering one more thing than I already have to." Her Internet is for recipes.

Reitman is right: If there is darkness in Garner, it's well-camouflaged. "I'm not that deep," she says, laughing. "This is pretty much what there is." 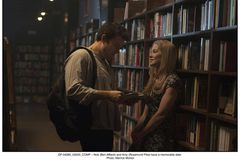 First close-up look of Ben Affleck as Batman unveiled
May 12, 2018 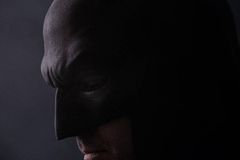