Jeremy Irons is the last forthright movie star. Not for him the usual platitudes of how blessed he feels and what a swell time he had on every movie. He tells what sounds like the truth, in long, looping stories, much like the long, looping scarves he likes to drape around his person.

When Irons, 65, entered a Toronto hotel room last week, everything about him was drapey – his dun-coloured jacket over a grey vest and black shirt; his tan riding pants, tucked into brown suede boots; his salt-and-pepper hair, which curled about his ears; and especially his magnificent mien, with hollows under his cheekbones so cave-like that you wouldn't be surprised to find ancient paintings lurking there. He looked like a cross between a country squire and Aerosmith's Steven Tyler.

And when he opened his mouth – oh, that voice. How to describe the silky glory of Irons's voice, the exquisiteness of its timbre and modulation? It's like sinking into a bath of black pearls, or taking sips of liquid morphine. He could say, "Pass the salt" and make you weep.

He's not averse to the sound of it, either. Most actors are incapable of relaying even a simple anecdote. Irons, by contrast, weaves novellas in the air – what the rooms looked like, where he sat in them, how many martinis he'd drunk, or Valiums he'd swallowed. Later that evening, when he did an onstage interview at the TIFF Bell Lightbox – to launch the exhibit David Cronenberg: Evolution, which runs until mid-January – he said things like, "'Tis," or, "And wonderful he was," without a drop of irony, and held the sold-out crowd spellbound.

Brideshead Revisited, the 1981 British miniseries that was his breakthrough, may have given Irons a career. But, he says frankly, that didn't stop him from walking off its set and braving a lawsuit when he was offered The French Lieutenant's Woman (opposite Meryl Streep), because he knew that film would make him a movie star. "I was 30, and I knew if my career was going to happen it would happen in my 30s," he says.

His actions enraged the network and sowed resentment in the cast, but he held his ground and got his way. Driving from the set in Manchester to go mano-a-mano with the network chief in London, "that was when I grew up," Irons says. "I thought, 'I am the master of my own destiny.'"

In The Mission, Irons may have shared top billing with Robert De Niro, but he freely calls the shoot "a nightmare," and admits to having "a blazing row" with De Niro in the makeup trailer, where he mocked everything that was "La MaMa, Method, and 'Bobby wants to go again.'" Afterward, the two got stoned together, ate pasta, guzzled wine, "and became fast friends."

During the making of 1990's Reversal of Fortune, a titillating true-crime tale, Irons cops to thinking the subject matter "lacked taste" and "smacked of cheap Sunday tabloids. It was not a film I leapt into with gusto." About 1992's Damage, which details an obsessive sexual relationship between a man and his son's fiancé, Irons confesses that he never liked the work of David Hare, who wrote the script, and admits that his relationship with co-star Juliette Binoche was "really tough, because she had just come out of … a [damaging] relationship and hated all men, and there we were talking about how she's going to get laid."

Discussing 1988's Dead Ringers, in which he played nasty twin gynecologists, he implies that he should have won his Oscar for it instead of for Reversal of Fortune, but the latter was "more of an acceptable film" for the academy to honour. He adds that winning has nothing to do with worth, but is a matter of "having the right aroma" at the right time.

And about his next film, Night Train to Lisbon, due Dec. 5, in which he plays a closed-off Swiss linguistics professor whose mind is so blown by a Portuguese novel that he takes a spontaneous trip to uncover its writer's secrets, Irons says this: He loved working with director Billie August (they'd previously made The House of the Spirits together), and with the distinguished cast, which includes Bruno Ganz and Charlotte Rampling. But frankly, the novel it's based on is "better than the film."

Despite this concatenation of candour, I notice one subject that Irons is not open about: his own inner workings. "I don't want to examine myself," he says. "I remember when est, that consciousness craze, came to England, I said, 'I don't want to do that.' I don't want to be aware of my scratches, how chipped my corners are. Because that's what I use for my work. I don't want them to be smoothed off and polished up. I just allow it to bubble into my work. When I look at stuff I've done, I may not like it, but I'm often surprised by it. I think, 'Where does that come from?'"

Recently, Irons watched two films he hadn't seen in many years, Dead Ringers and 1997's Lolita, directed by Adrien Lyne. "God, they're both really odd movies," he says. "I get into a place when I'm working, and it's only when I'm way out of it and look back that I see it must have been a strange place. But at the time it feels normal."

Despite his fascination with characters who are morally troubled, Irons insists that he himself is not. He's been married to the actress Sinead Cusack for 34 years; they have two grown sons. He's active in the Prison Phoenix Trust, which teaches prisoners to meditate, and is a UN Goodwill Ambassador. Passionate about the environment, he's currently touring the world with a documentary that he produced and narrates, Trashed, about the dangers over overconsumption. He lives in Ireland's County Cork in a pink castle on Roaringwater Bay, and on evenings when the wind is right, he hops into his sailboat and heads off solo. He also rides his horses and his motorcycles, and he gardens.

"They say, 'Never nearer to God than in a garden,' and I think that's true," Irons purrs. "David [Cronenberg] says he lives his weirdness in his work, and I would say the same. We all have dark caverns and secret places. Most people either ignore them, or live them and get into trouble – hence your mayor Rob Ford. I can subsume them into my work."

Beneath all his candour, what Irons finds most dramatic are "people who are covering pain, from childhood, relationships, whatever it may be, and getting on with it," he says. "I'm attracted to characters who are covering. I'm not interested in characters who wear their hearts on their sleeves. I like the tension. I think of my characters as an advent calendar. The life is inside all those closed windows. Scene by scene you open and allow the audience to see in, just a little bit, and then you move on. That's what I like to do." 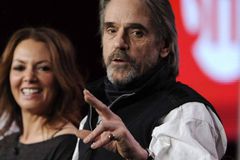 Jeremy Irons on finding the good side of bad guys
April 1, 2011 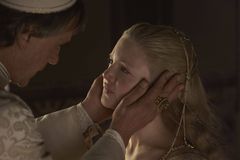