I hate to rain on Argo's parade. I do. The latest Ben Affleck film is enthralling. And it's riding high: No. 1 at the North American box office a few weeks in, packed theatres, Oscar buzz, and a whopping 95-per-cent "fresh" on Rotten Tomatoes critics' aggregator. Argo appears to be one of the few things a polarized America can agree on.

The story of how six U.S. citizens were able to flee revolutionary Iran during the 1979-80 hostage crisis with the help of a CIA operative (and also, please, a brave Canadian ambassador) is winning justifiable love for being an entertaining political thriller. But it deserves less affection for its untimely and deeply troubling portrayal of the Iranian people. Not so fresh.

Some film pundits and cynics might suggest that expecting anything else from Hollywood is naive. Iran is America's current stated enemy, after all. It's an election year; patriotic movies are not unexpected. Besides, there will always be collateral damage when focusing the lens on bad guys who need to be simply and collectively identified. That's the movies, right?

Maybe. But among all the rave reviews, virtually no one in the mainstream media has called out this unbalanced depiction of an entire ethnic national group, and the broader implications of the portrait.

Argo provides the uninitiated Westerner with a crash course in the nature of the Iranian people as if out of some kind of hawkish fairy tale. Not just the regime, the people. In Argo, somewhere amid the exciting escape of six sympathetic American victims, we are treated to hordes of hysterical, screaming, untrustworthy, irrational, bearded and lethal antagonists. Some of them are pivotal characters that advance the plot. Others are just bystanders in seething crowds. It doesn't seem to matter. The point is, these are the villains. Or more specifically, the Iranians. All of them. There is not one positive Iranian subject in the entire story.

When CIA operative Tony Mendez (the hero, played by Affleck) and the American escapees are trying to make their way through a bazaar in the crowded streets of Tehran, the omnibus nature of the hate-spitting Iranians is reminiscent of costumed characters from a professional wrestling league. In a subtler, earlier scene in which Mendez lands at the Tehran airport, the film makes it clear that every Iranian in sight – from an old man to a young woman – is to be treated with suspicion.

This is to say nothing of the more incendiary moments, such as that of a barking flock of Iranians stomping on an American flag. Scenes like that are clearly meant to arouse the emotions of a Western audience. And in a fiction-meets-reality kind of kismet, here's a Hollywood movie that finds convenient kinship – and symbiotic validation – in today's news cycle, as American politicians hammer away at the message that Iran and its people represent the greatest threat to global peace.

The defence for these portrayals of demonic Iranians is to say that it's basic history: These horrible events happened in those fiery revolutionary days in Tehran. Hence Argo's use of those familiar and near-omnipotent five words that flash on the screen early in the proceedings: "Based on a true story." Indeed, if all this actually went down, why not show it? And I certainly have no desire to whitewash the extremism of that period nor to exonerate the current regime and its countless human-rights abuses.

But then, context is important. And while the filmmakers try to contextualize things, in the opening couple of minutes, with a short history lesson about American imperialism in Iran through the 20th century, those efforts are soon undone.

Would it be instructive to learn more about why young Iranian people were resentful of the United States housing the dictatorial Shah they'd worked to overthrow? Might it be helpful to explain that not all Iranians were Islamic formalists who supported Ayatollah Ruhollah Khomeini? Or that the revolution was a popular one that originally included liberal democrats, feminists, nationalists, socialists and workers – a revolution that was co-opted by the mullahs and extremists to lead to the Islamic Republic that we know today? Even if the film's scope is reductive in its treatment of the revolution, the individual Iranian characters themselves might have been written with a lighter hand, leaving room for nuance. But Argo is a popcorn thriller that doesn't sweat these details. If there's any attention to nuance, it's not about Iranians.

Twenty years ago, a particularly racist film about the U.S.-Iran experience, Not Without My Daughter, hit theatres and had some success at the box office. It, too, was "based on a true story" and provided an uncompromisingly demonizing portrait of Iranians. It underscored stereotypes that Persian families living in Iran and the West had fought for years. But at the time, the mainstream Western media ignored all that. Nothing was said.

Twenty years later, Argo is a much better film which makes some attempts at historical context and is far more self-aware of the legacy of America's role in the Middle East. But it's still highly problematic. There is an easy corrective: If you'd like a smart, nuanced, grown-up portrait of contemporary Iran, watch Asghar Farhadi's A Separation. It won an Academy Award last year. It depicts marital discord, class tension and family tragedy from multiple Persian perspectives. Oh yeah, and it was made in Tehran.

Jian Ghomeshi is the host and co-creator of Q on CBC Radio and TV. He is the author of the national 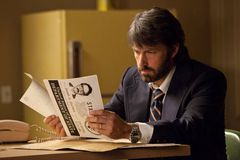 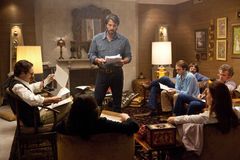