The quintessential "lifestyle" documentary, Jiro Dreams of Sushi combines a profile of a celebrity chef, a quick cultural immersion and many mouth-watering montages of food preparation in one package. Akin to one of The New Yorker's vintage profiles, the film begins with a few attention-grabbing facts about its subject and gradually adds layers of broader and deeper context, touching on persona,, family and the esthetic and culinary traditions of Japan.

The star is Jiro Ono, a revered 85-year-old sushi chef who runs Sukiyabashi Jiro, a 10-seat restaurant in the basement of an office building adjacent to the Ginza subway station in Tokyo. In spite of its location, Sukiyabashi Jiro has a three-star Michelin rating as one of the finest restaurants in the world. Reservations must be made a month in advance and meals start at $300 a person.

We know this when an out-of-towner bumbles into the unprepossessing restaurant, wondering if they have any take-out menus. When he's told the price and reservation wait, he backs out bowing quickly. We know how great the restaurant is from Tokyo food critic Masuhiro Yamamoto, who declares that no other restaurant in Tokyo can compare: "No one ever has a bad experience there," he says.

The standard course, without the distractions of alcohol or main courses, is a 20-piece symphony of sushi from mild to increasing complex tastes, guided by traditional rules of extreme simplicity (no sushi pizzas here) and precision. Fish slices are lightly brushed with soy sauce and wasabi. There are three kinds of tuna, of different degrees of fatness. Shrimp are killed moments before being served. Jiro has his own rice dealer, who refuses to sell to the top hotels because they wouldn't know what to do with his quality of rice. The egg tuna that serves as desert is an art form in itself: One of the kitchen cooks said he took months before his first piece was accepted.

The film is a portrait of the artisan ( shokunin) as an old man. At work since he was 9, Ono is a former soldier who, since he first apprenticed as a chef, has dreamed about ways to improve sushi. He obsesses about improving his craft by getting the best ingredients, massaging the octopus 40 minutes instead of 30, and experimenting to find exactly the right serving temperature.

What else is the film about? The traditional, and sometimes negative obsession with dedication and sacrifice. Ono is proudly tough, a workaholic, who says he derives a kind of ecstasy from work, which depends on others sacrificing for him. At 70 he had a heart attack and decided that, perhaps, it was time to let his sons buy fish from the market for him. The shadow of mortality convinced him he had to delegate some responsibilities. He hates holidays. He apparently has a wife because we see her in a photograph. He chuckles when he recounts that, on the rare day he stayed home, his sons used to wonder who the strange man was sleeping in his mother's bed.

And of course, the sacrifice is also imposed on others. The youngest son, Takashi, runs his own cheaper branch of the restaurant in the tourist-friendly Roppongi Hills, while the oldest son Yoshikazu, now in his late 50s, patiently waits to inherit the business.

As a young man he dreamed of racing cars. Now he rides a bicycle to the market each day, to negotiate with an elite fraternity of top fish dealers, who save their best for Jiri's restaurant. Like the fish that are disappearing from the oceans, they're probably the last of a breed. And at night, Yoshikazu and his father stand behind the counter scrutinizing their customers, who are eating their art, bite after perfect bite. 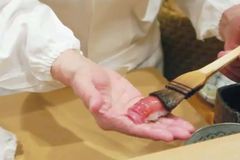 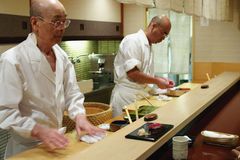