Running down the side of every actor's page in the Internet Movie Database is a selection of "related lists." On Rosario Dawson's, for example, they include "The Most Desirable Celebrity Women of All Time" and "Hottest Actresses." John C. McGinley's page, on the other hand, features "The 50 Most Underrated Actors" and "Fantastic Actors We Struggle to Name." McGinley is that guy you've seen a million times, usually playing someone hale, genial and manly, be he cop, fireman, businessman, soldier or jock. You always like him, and he always delivers, seamlessly.

Maybe sometimes too seamlessly. That's his gift and his curse. When Warner Bros. sent out a press release inviting Toronto journalists to interview McGinley, 53, about his new film, 42 – which tells the story of Jackie Robinson's initial season as the first black player in the major leagues – the release mentioned writer/director Brian Helgeland (L.A. Confidential, A Knight's Tale), relative newcomer Chadwick Boseman as Robinson, and Harrison Ford as team exec Branch Rickey.

But it did not include McGinley's character, the legendary Brooklyn Dodgers announcer Red Barber. Nor does Red appear in the trailer. (The film opened yesterday, in time for Jackie Robinson Day, April 15, when every ball player will wear 42 to honour him.)

That lack of fanfare doesn't faze McGinley, who's got a wide-open face and a here-comes-trouble smile. He grabs your hand in his paw and gives it a hearty shake. "Your hair looks cute. Did you just have a haircut?" he booms – apropos of nothing, since he's never seen you or your hair before. You tell him he should use that line to win over every journalist, and he replies, "Can't do that. Not everyone's hair looks cute." He's not flirting, he's just bursting – with energy, friendliness, and lots and lots of words.

"I have no issue with being a character actor," he says. "If you've been around enough that people are able to segregate you into that category, it means you're working. So that's good!"

McGinley attributes his steady gigs to luck and obsessive commitment. Born in Greenwich Village, he studied acting at NYU's Tisch School of the Arts. While understudying John Turturro in a John Patrick Shanley play, he was noticed by Oliver Stone's casting director. Stone cast him in Platoon, and then in a half-dozen more films, including Wall Street and Born on the Fourth of July. McGinley also starred on the TV series Scrubs for nine seasons as Dr. Perry Cox, who mentors Zack Braff by verbally batting him like a pinata.

"Scrubs and Oliver were my two strokes of good fortune," McGinley says. "I mean, Preston Sturges is the only director who hired people six times.

"And shows don't go 190 episodes. It's just not possible, for one reason: During a nine-year run, the head of the studio who green-lit your show will be fired and replaced with someone else, who will can you. The percentage of shows that doesn't happen to is absurdly tiny – Friends and Cheers, and I can't even think what else."

Once McGinley gets a job, he gives himself over to it fully, no matter the size. Red Barber has only a few scenes in 42, but his voice is a specific one, with colourful turns of phrase evocative of the 1940s. To prepare, McGinley "obsessively compulsively" listened to recordings of games Barber called, and cherry-picked lines that might work in the film.

"Every syllable I say is something Red said," McGinley says. "Brooklyn Dodger fans aren't fans, they're fanatics, so we had to rise to that level. And it's important to me that Brian let me do that. Every actor just wants to feel like they're collaborating. When a director empowers you with that sense, it makes you want to run through a wall for the guy."

Similarly, when McGinley was prepping for a Broadway run (recently ended) of David Mamet's Glengarry Glen Ross, opposite Al Pacino, he hired a young actor, cleared a rehearsal space in his house on Malibu Beach, and spent a month running lines, two two-hour periods a day, six days a week. And that was before official rehearsals began in New York.

"That's all fear-based, obviously, because I was scared to death," McGinley deadpans. "The conventional wisdom with David Mamet is, you do not change a word. And that agrees with me. If you want to change any of David's words, it's like wanting to change the iambic pentameter in Shakespeare – you should do something else."

But McGinley's life isn't all great jobs, golf games with Malibu buddies like John Cusack, and hanging out with his wife of six years, Nicole Kessler, a yoga instructor, and their two young daughters, Billie Grace, 5, and Kate, 2. His son Max, 16 (with his first wife, Lauren Lambert; they divorced in 2001), was born with a challenging form of Down syndrome: He can't protect himself physically, and speaks words but not sentences. "To me, it's a call to be a great parent, because you're going to have to be," McGinley says. "Parenting our girls is not as hard as parenting Max. It's just not."

He describes how he has to be "hypervigilant" with Max, always holding his hand in case a sudden siren compels him to dart into the street, training him – "and I do use the verb 'to train,'" McGinley says – to put his hands down if he falls, or to not lean into strange dogs' faces.

"And that's tip of the iceberg for the heightened awareness and heightened energy drain," he continues. "At every play date and party, I'm this guy." He looks around alertly. "People are like, 'You're so on edge with your son.' I'm like, 'Just be quiet. I don't want to hear how I am with my son, because we just got back from the hospital with eight stitches on his chin.'"

But Max has also taught him a less reciprocal definition of love, McGinley says: "With most kids, there's a return on what we invest. With the two girls, I get a ton of hugs and 'I love you's.' Max has proximity issues, so sometimes I'm not getting a hug, even if I busted my ass to make the eight-hour journey to the Wiggles concert and back. That has to be okay. And it is okay, but it's an adjustment."

Unfortunately, baseball movies are never really about the game
May 11, 2018 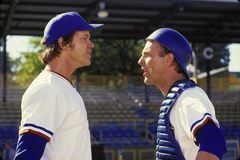 Film Review
42: Jackie Robinson biopic touches all the bases but fails to score
May 11, 2018 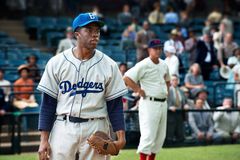 Film Review
Trouble With the Curve: A baseball flick that telegraphs its every pitch
May 8, 2018 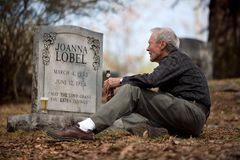