It's not for everyone, this Twin Peaks. It never was. It's too, too hallucinatory, disturbing and flawed. It always was.

The mystery was solved, but the series became a headlong excursion into morbid jocularity about sex, revenge, ghosts, other dimensions of reality and a lady with a log that communicated important clues about all that depravity. It never stopped being gorgeous, but it stopped being coherent. It amounted to two seasons of classic TV, as mind-boggling as it was memorable.

Twin Peaks returned on Sunday night (on Showtime in the United States and on The Movie Network/CraveTV in Canada), a reappearance rightly billed as the TV event of the year. And it is just as mind-boggling as ever. But not as memorable. Annoying, certainly. Gorgeous too, in sound design, score and cinematography. And utterly incoherent, unless you are very familiar with the original series and Lynch's spin-off movie Fire Walk With Me.

What it emphatically isn't is a conventional TV series, even by the standards of today's adult, serious-minded cable-drama series. It seems to flow seamlessly from the original network show of 1990 but it also seems what David Lynch is offering is less an 18-hour excursion down memory lane than a rambling return to the hell that always lay under the surface of that kooky town.

Summarizing the plot is a challenge barely worth accepting since there is so little actual plot movement. Dale Cooper is back. But there's a "good" Dale trapped in the Black Lodge, which is an unearthly place where the dead congregate and there are red satin curtains everywhere. And there is a "bad" Dale, who is out there murdering folks and plotting the unsavoury with unknowable accomplices.

This all seems to be happening in the neck of the woods that is the fictional Twin Peaks in the state of Washington. (In the original series, some shady Canadians were eventually featured and feared, and there are hints that the weird Canadian vibe will return.) But there is also an apparently important plot sideline developing in New York City. That's where that weird machine, a sort-of vagina dentata device, is located. Meanwhile in South Dakota, a young woman, a librarian, is found horribly murdered, shot through the eye. But when her body is examined, her head is atop the body of a large, unknown man.

A local school principal named Bill (Matthew Lillard) is arrested for that but it seems his wife cunningly set him up. They were both having passionate affairs, apparently. Then the "bad" Dale Cooper shows up and shoots the wife in the eye. This is not spoiler-level plot giveaway. The narrative is so rambling, congested with oddness and confusing that some details barely matter. For anyone obsessed with the original, it is worth noting that there are older, slightly wiser versions of Laura Palmer (Sheryl Lee), Leland Palmer (Ray Wise), and the one-armed man (Al Strobel), along with a talking tree and the Log Lady.

There is a lot to admire in this new Twin Peaks. It retains the arch dialogue and excruciatingly slow rhythm of the original and, indeed, most of David Lynch's film work. It is deeply unsettling even as it is maddeningly self-involved and irrational. It remains a feverish but deadpan dream of sexually charged small-town life. It would be very easy to get lost inside it for a wee while.

How Twin Peaks’ ‘beautifully dark’ music left a lasting impact
The main reason for all the TV revivals – public appetite
John Doyle: David Lynch’s Twin Peaks revival probably as strange as he is 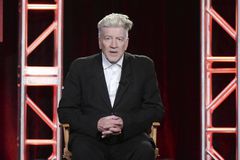