Possibly no one else does "grim" with as much unsparing enthusiasm as the Scandinavians. Take King of Devil's Island, a tale of a wintry boys' prison on an island, shot in shades of chilly blue and gun-metal grey, which was a box-office hit in Norway two years ago. The film is set in 1915 on the Alcatraz-like island of Bastay, where the inmates – "maladjusted" boys between 11 and 18 – spend their days in the cold, thinly dressed and without gloves, picking stones or chopping wood.

The self-righteous governor, Bestyreren (Stellan Skarsgard), is determined to punish these boys so harshly they'll have no choice but to become "honourable, noble, useful, Christian boys." At the same time, he ignores the creepy behaviour of his underling, Brathen (Kristoffer Joner), a man who has remained in his low-level post for a suspiciously long time.

Director Marius Holst's film is conventional but well-made, and of historical interest. It's based on an incident in 1915, when the Norwegian army was used to suppress a boy's rebellion at the Bastay detention centre. The film depicts events leading up to that rebellion using characters most filmgoers will readily recognize as familiar types: the cold authority figure and the psychopathic underling who run the place; and among the inmates, the inspirational rebel, the conformist and the pathetic victim.

Overall, King of Devil's Island has a lot in common with historically based institutional child-abuse stories from other countries, including John N. Smith's Newfoundland-set The Boys of St. Vincent, and Peter Mullan's Irish drama The Magdalene Sisters. The distinctiveness of King of Devil's Island is that the film is more interested in capturing an oppressive sense of dread rather than depicting specific torments, focusing on the bone-chilling coldness and the tough, frightened faces of the boys. Many of the inmates were non-actors, cast from kids with troubled backgrounds.

We begin with the voice-over of our rebel, Erling (Benjamin Helstad), a 17-year-old harpoonist with a whaling ship, as he describes a whale that symbolizes an indomitable will by surviving being speared by three harpoons in one day before finally succumbing. We soon meet Erling, a stocky confident young man, when he arrives with the weak and frightened boy Ivar (Magnus Langlete) on their first day of incarceration. After being warned to stay on their best behaviour by Bestyreren, they are forced to walk naked past the other boys on the way to their dormitory. Back in the governor's house, his nervous young wife refers to a rumour that Erling has committed murder.

From the outset, Erling is determined not to conform. After easily beating up the prison's resident bully, he systematically sets about planning his escape. Meanwhile, the unfortunate Ivar ends up doing laundry duties, under the close supervision of the creepy Brathen. Erling's brief escape and then recapture, compounded by Ivar's unfortunate fate, eventually push the boys, including those who were willing to capitulate before, to lash back.

No doubt King of Devil's Island has been released in North America thanks to the presence of Stellan Skarsgard, an actor known for his American work, including in the Pirates of the Caribbean and appearances on the HBO series Entourage. With King of Devil's Island, he's deeply at home in a role that resonates with his appearances in a couple of other gloomy Scandinavian-set films: Lars von Trier's Melancholia and David Fincher's The Girl with the Dragon Tattoo. In each case, Skarsgard excels as the archetypal whited sepulchre, the man whose upstanding social status hides an inner world of shame and corruption. 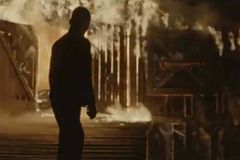