In Knife Fight, Rob Lowe plays a political strategist who is mopping up two sex scandals while struggling to get his candidate elected as governor. To make the film as realistic as possible, screenwriters Chris Lehane and Bill Guttentag relied on first-hand experience. Lehane, a former aide to U.S. president Bill Clinton and presidential candidate Al Gore, is a Democractic operator who is credited with coining the phrase "a vast right-wing conspiracy" to describe attacks on the scandal-plagued Clinton. Guttentag, who also directed the film, has won two Oscars in the short documentary category, including one in 2003 for Twin Towers about two brothers, one a police officer, the other a firefighter, and their actions on Sept. 11, 2001.

How did the script get written? Whose idea was it?

Chris Lehane: The genesis of this began in 2004. I was doing a presidential campaign [for John Kerry] and Bill, who had just won an Oscar for Twin Towers, his film on 9/11, called, looking to do a documentary where he could bring a camera crew into the proverbial room behind the room to follow a real presidential campaign. I gathered staff and put the phone on speaker and told them they would get to hear what a Hollywood pitch sounded like. Bill gave the pitch and we all laughed. At that time, it was not really feasible to bring the cameras in. Flash forward a couple of years: Bill asked, "If we can't do a doc, can we do a fictional piece?"

Two sex scandals and someone taken hostage at knife point. Is this really what political campaigns are like?

Bill Guttentag: If you open the paper, that is what's in there. Anthony Weiner, [Eliot] Spitzer, Clinton, those are what the scandals are. They make for some human drama, but also, if you are trying to reflect the world as it exists, these are the kind of scandals that bring people down, at least in this country. They wouldn't bring anyone down in France.

Bill, does your background as a documentary filmmaker help to create this kind of realism?

BG: One thing from making documentary film is you get some sense of how real people behave. You go to movies, everything seems kind of fake to me, even movies I like. Having a documentary background, you can look at situations and say this is the way people truly act. I hope an audience senses that, and cares about the story more.

CL: There are a number of episodes in the film that draw from that. You have Alan Dershowitz, the super lawyer who actually plays a lawyer in the film and rewrote the script so that he would negotiate in the way he would negotiate. There is a press conference involving a doctor representing the Kentucky Republican; the doctor is Steve Schmidt, who was John McCain's campaign manager and who had to go out and discuss McCain's health. All the people at the press conference are real American political reporters. We just gave them a fact sheet [and said] 'Go out and do a press conference.' The outtakes are hilarious. They get to a point where Steve doesn't have the answers on his fact sheet and they are drilling down. Both sides sort of forgot it was not a real press conference.

For all the political manipulations the film exposes, the characters are idealistic about their jobs.

CL: It is a bit of a love letter to those who are in the business. Almost everyone is doing it because they do believe what they are doing will have a bigger impact on their state, their country, on the world. It is a tough business where sometimes you have to use really hard tactics to achieve noble goals.

BG: I saw a friend of mine yesterday who is an official in the Obama administration and she was teary over the speech he gave [at the inauguration.] She is slugging it out in Washington politics, but still has a sense of idealism.

Chris, a governor has an affair with an intern in the movie. What did you feel about the Monica Lewinsky scandal at the time?

CL: I was one of the people in the Clinton White House who were, euphemistically, responsible for defending the president against the Republican-generated controversies of the era. No one has ever excused the president's behaviour, but all of us recognized this was a Republican effort to use and abuse the investigative power to go after a sitting president who was doing great things for the country. We needed to defend and fight back, given what was at stake.

Are you going to write more scripts together?

CL: I joke that writing a 30-sec TV ad is a heck of a lot easier, even working with someone as talented as Bill … But when you get to write a script, your candidate never loses. My guess is we will be doing some additional projects, but I am not giving up my day job. 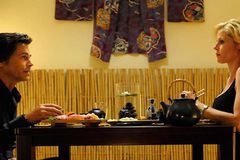