As producer, director, co-writer and star, Tom Hanks has a lot of clout here, and a good thing too. It takes tons of the stuff, and an equal measure of arrogance, to make a movie as formless and benignly vacuous as Larry Crowne. So to his impressive list of credits add the only one that matters: culprit-in-chief.

The first frames offer a terrific sneak peek into that arrogance issue. Hanks believes so deeply in his innate likeability as a screen actor that it blinds him to what he's doing as a screenwriter. Just check out the opener. There, we meet Larry, clearly a relentlessly upbeat, know-it-all, employee-of-the-month type working at a Walmart-like store. As written, Larry is damned annoying. But, since the guy is played by Hanks, he can't be annoying. He must be a likeable fellow. And when Larry gets canned in a typical corporate down-sizing manoeuvre, he must be a sympathetic figure and a poignant reminder of a repressed economy's random cruelty. Sorry but, as the axe fell, I could barely resist the urge to cheer.

Right off, then, the firing scene backfires - there's just no earned drama. What follows is meant to be a romantic comedy, yet guess what - no romance either, and precious few laughs. Why? See above, plus this exacerbating factor: Tom Hanks the director. Way back in 1996, Hanks proved himself more than competent with his feature debut in That Thing You Do! Now he's less than mediocre. Entire sequences plod by bereft of rhythm or pacing or any comic payoff. Oddly, the emptiness also feels forced and manic, like a sitcom without a situation. Not to worry though. The lucky director just has to shift himself from behind the camera to the front and, presto, he's a likeable commodity, right?

As for the amorous complications traditional in a romantic comedy, the null-and-void theme continues: There aren't any. Larry decides to better himself by enrolling in East Valley Community College to major in Speech 217: The Art of Informal Remarks. Even as we're swallowing our wonderment at the course title (and pondering Gertrude Stein's famous dictum: "Remarks are not literature"), good apple Larry is taking a shine to his professor. That's Mercedes, allegedly a burnt-out case with a drinking problem, but not so anyone would notice - certainly not Julia Roberts, whose only real job here is to rapidly make the prof as thoroughly likeable as you-know-who.

Luckily, Larry has classmates. Like Talia, who invites him and his vintage Yamaha scooter to scoot in her "Scooter Gang." That's fun, almost as much as watching her do a makeover on Larry. A trendy haircut, spiffy jeans and some very colourful scarves give birth to a brand-new man. Yikes, at this point, Hanks is so likeable it hurts.

Of course, further amusement can be had by simply listening to the speeches in Speech 217, with "How to Prepare Restaurant-Quality French Toast" high on my list of favourites. Scintillating too is the dialogue which, courtesy of a writerly assist from Nia Vardalos, includes this exchange. "You're a great teacher," says the student. "You're a great student," says the teacher. Admittedly, those remarks do sound a tad formal, but there's no denying the artistry.

Forgive me. I dwell ungenerously on the thorns in Larry Crowne. There is a rose, the kiss that comes at long last, when Hanks and Roberts finally pucker up. Oops, forgive me again, because even the climactic buss rates just another lacklustre grade in this sea of C-minuses. Next semester, the stars should drop Speech 217 and enroll in Chemistry 101 - they dearly need some.

Theatres (and the movies they show) are being amended for mature audiences
April 30, 2011 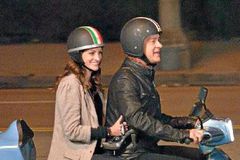 Nia Vardalos: My big fat Greek secret about Tom Hanks
July 2, 2011
Follow us on Twitter @globearts Opens in a new window
Report an error Editorial code of conduct
Due to technical reasons, we have temporarily removed commenting from our articles. We hope to have this fixed soon. Thank you for your patience. If you are looking to give feedback on our new site, please send it along to feedback@globeandmail.com. If you want to write a letter to the editor, please forward to letters@globeandmail.com.
Comments