I'm not in love, but it's not my fault. Nobody knows how romance works, or how people get together, or whether "getting together" is even a thing any more. Maybe I was born at the wrong time: People take longer to get married, more marriages end in divorce, and being single seems less about finding love than seeking the most fun with the least hassle. If you're busy, and I bet you are, you can scroll through dates as pitilessly as Cher Horowitz chose her outfits in Clueless. So it's no surprise the romantic comedy is floundering.

They Came Together, which opened on Friday, might be a postmortem for the rom-com: an all-over spoof of the genre's shredded conventions. Molly (Amy Poehler) is a big-hearted candy-shop owner; Joel (Paul Rudd) works for the chain store that's about to put her out of business; New York, as the protagonists point out more than once, is "like another character." Joel and Molly both love "fiction books" and Q-tips – "Have you ever given yourself a pap smear?" Joel asks, on their first date – and wonders repeatedly "what happened to a good old-fashioned cup of coffee." At first they hate each other, then they love each other, then they hate each other but still really love each other. In the end, they come together.

The movie was co-written by David Wain, who directed, and Michael Showalter (the duo who brought us Wet Hot American Summer). As such, it's wildly funny and on the mark. Rom-com clichés are almost too obvious to parody, but the jokes and references here are so DayGlo blinding that the humour comes more from absurdity than recognition. Romantic comedy is generally reviled, so a sophisticated parody would have to be a tribute as well, and this one is: It's hard not to feel a little wistful for a time when these clichés were less clichéd, just as it's now hard to watch The Simpsons without nostalgia for the middle-class dream it was supposed to send up.

All rom-coms are generous in sugar and fat, which is what makes the bad ones so offensive: They work on you anyway. I know by the way I cried at the first Sex and the City movie – which is great, if you consider it camp – that romance is instinct no matter how cynical we pretend to be. Another instinct: imagining a past in which everything always worked out. The conventions around love are changing, but then, as rom-coms demonstrate, they always have been.

In a smart, exhaustive feature published earlier this year in LA Weekly, Amy Nicholson investigated the death of the romantic comedy – which has died before, but seemed vital as recently as the mid-2000s. Blame a decline in the genre's quality, she argued, as well as Hollywood's neglect of female audiences; consider the possibility that our culture has simply outgrown the form. North Americans yearn for jobs, not soulmates, and know that love usually ends badly.

"I don't think people are any more cynical about love than they were in the seventies, when Annie Hall was made by Woody Allen," Nicholson says over the phone. "And he was coming out of the sexual revolution, and that was a huge shift, even bigger than what we're seeing now." She thinks the rom-com's decline has more to do with bad scripts and gender misconceptions than with notions about the death of romance, which, it turns out, is something of a misconception itself. Fewer Canadians are married these days, but more are together common-law; a 2006 survey of American teens found that 81 per cent expected to marry (likely) and, among those, 90 per cent expected to marry for life (less likely, but sweet). Obviously, marriage means a lot more now that everyone can get married. Conventions change because they have to.

A staple theme of the rom-com is how to find love in these crazy times, whatever the times may be. That's how the genre works: Everyone's confused until the very end. In 1993's Sleepless in Seattle, Rob Reiner brings his friend Tom Hanks, playing the sensitive widower who hasn't been "out there" since the Carter administration, up to speed: "First you have to be friends, you have to like each other. Then you neck. This could go on for years. Then you have tests, and then you get to do it with a condom on. The good news is, you split the check."

Four years earlier, Billy Crystal's Harry Burns lived a bachelor lifestyle barely distinguishable from what we now call "hookup culture" (but shouldn't, because calling it that treats other people's fun like a conspiracy). Harry had commitment issues; eventually he fell for Sally and committed. Maybe they'll get divorced, and maybe they'll remarry – there's a whole subgenre for that, which They Come Together also throws to. Love tweaks the imagination as much as the fear that we'll never find it. We express that fear partly through bewailing the times we were born into, as I sometimes do, and the death of love as we suppose it worked before.

It's understood that after the credits roll, you're on your own: Lovers will leave you, bore you, die. Love is not the answer to life's problems. Love is a problem; the best problem. To quote Woody Allen, "The heart is a very, very resilient little muscle." 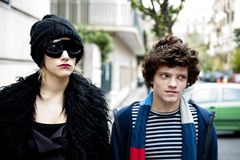 Film Review
They Came Together: A parody party that gets painful
June 27, 2014 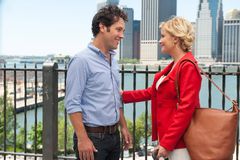