This summer, it seems that every big-budget movie has its superhero, while every smaller one has … Mark Duplass? The friendly faced, shaggy-haired actor/writer/director is this season's indie hero, and he's striking a blow for ordinary dudes and do-it-yourselfers everywhere.

He certainly seems to have superhuman stamina. In the last six weeks, Duplass, a 35-year-old New Orleans native now living in Los Angeles, has launched five different films. He has a key role in Safety Not Guaranteed, playing a just-because-you're-paranoid-doesn't-mean-they're-not-after-you inventor. In Lawrence Kasdan's Darling Companion, he's in a heavyweight cast that includes Diane Keaton, Kevin Kline, Dianne Wiest and Sam Shepard.

He co-starred in, co-wrote and executive-produced Your Sister's Sister, where he complicates things between siblings Emily Blunt and Rosemarie DeWitt. He acts in another sibling story, People Like Us, in which Elizabeth Banks plays the sister Chris Pine never knew he had. And with his brother Jay he wrote and directed The Do-Deca Pentathlon, about two brothers who work out their sibling rivalry by competing in 25 homemade athletic events. Mark calls it "a sensitive indie version of a big-budget Will Ferrell comedy."

In his spare time, Duplass just finished working with Oscar-winning director Kathryn Bigelow on an as-yet-untitled movie; he has a lead role in the semi-scripted F/X comedy series The League, about a fantasy football league, with a new season starting this fall; and he and Jay are adapting the novel Mule for Todd Phillips' company and may update the classic Same Time, Next Year for Scott Rudin's.

"This happens to be a crazy bottleneck of things right now, it's not always like this," Duplass demurred via phone recently. But in fact, it's been this way for a while. The Do-Deca-Pentathlon was shot a few years ago, but the brothers were too busy racing ahead with their next two pictures, Cyrus and Jeff, Who Lives At Home, to find time to edit it.

This extraordinary output is possible because Duplass sticks to a formula, even as his budgets have grown larger and his cast list more glittering with each picture. He's not afraid to start with the loosest of ideas: "All of our films begin as these weird conversations we have when we're sitting in airports watching people, basically." He's not fazed by an unpolished script. "I can blast out a script idea, get it to 70 or 80 per cent, and rather than spend the rest of the year banging my head against the wall, I'll hand it off to Jay or Lynn [Shelton, the director of Your Sister's Sister] or Nick [Kroll, a fellow actor/writer who costars on The League]," Duplass admits. "And while they're fixing that, I'll move on to something else. I no longer believe that being an auteur means you have to do the whole thing. You can share it and get help and that's okay."

He's careful to design stories that are appropriate for short shoots (12 to 30 days), one or two locations, few characters and longer scenes. He's open to improvising: What he gives up in preparation, rehearsal and planning, he feels he gains in spontaneity and surprise. "It's about making a piece of art with our instincts, quickly and cheaply, and taking a chance on it," Duplass says. "You're not going into these movies believing you have a formula that's going to crush it. You're going in hoping you can find some magic. Maybe the lighting's not perfect, maybe the camera wobbles. But you feel, subconsciously, like you're a fly on the wall observing something that's really happening. That shaggy looseness is intoxicating to me."

Finally, he finances his work himself. "We find a lot of ways to complain in independent film – 'This person doesn't want to fund my movie,'" he says. "The only [challenge] in our movies is, 'Are we smart, funny and creative enough to make this thing good?' A lot of independent filmmakers see it as a pain in the ass that they are acting as well as hanging lights, cleaning their own wardrobe and cooking dinner for the crew. But I like that. To me it's not, 'Make one Sundance movie so you can go to Hollywood.' It's keep making these movies, because they're the most vital to me. I enjoy them as life experiences."

Duplass's art is his life, and he likes it that way. He, his wife Katie Aselton (an actress who also costars in The League) and their young children live in the funky Los Feliz neighborhood (sort of L.A.'s Brooklyn, but pricier) on a property with two guesthouses perpetually filled with long- or short-term visitors, usually filmmakers. "I didn't think I would be that commune guy," Duplass says. "I'm a private person. But it's built-in socializing. I come home from work and everybody's at the dinner table. I don't have to schedule anything. We hang out for an hour, have a few drinks, then I go downstairs and get back to work, or hang out with my kids."

He's "obsessed with" John Cassavetes, who was making Duplass-style indie films long before they were considered a genre. "I have a fantasy about what would happen in the Cassavetes household over Sunday night dinners," Duplass says. "Writers throwing around ideas, their kids running around, Peter Falk talks about the woman he met at the bus stop, and that ends up in a movie. We try to emulate that in our household."

Except in the Duplass/Aselton household, inspiration comes on Monday nights, when they host a weekly gathering of friends and filmmakers to watch The Bachelor or Bachelorette. "Okay, it's embarrassing, but we have a big meal, and inevitably, wonderful human-interaction ideas are stolen and turned into movie form," he says.

Not bad for a guy who, not that long ago, gave up on auditioning "because it would hurt my feelings being turned down constantly." After he started writing and starring in his own stuff, people began coming to him. "I don't believe I'm going to be like this my whole life," he says. "I might burn out, or have periods where I'm not inspired. I was a musician for a long time, and I couldn't stop writing, then all of a sudden I couldn't write at all anymore. So part of me wants to do it while it's good."

He also cops to being "a little bit of a crazy person when it comes to this stuff. The Do-Deca-Pentathlon was an insanely huge movie to do on a small budget. It has all these big sports set pieces. We staged a 5-k race, on our own, with 100 extras and a bunch of cameras. It was crazy. But desperation is a powerful force." He laughs. "That movie almost killed us."

As any homegrown filmmaker longing to follow his lead should realize, what doesn't kill you makes you stronger. Right now, Duplass is Selfmade Superman. 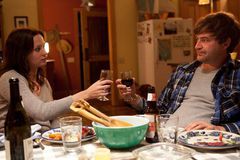 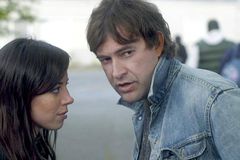 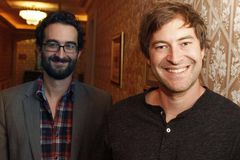