Two or three years ago, Mark Ruffalo realized something about his acting: He'd been holding back parts of himself, "to protect myself from failure," he said. We were in a Toronto hotel room, and he was leaning forward on the sofa, body language open. His voice is soft and husky; you can hear his native Wisconsin in his flat "a's," and some of his sentences sort of float off. But on this point, his every word had energy. His big brown eyes were wide awake.

"This whole slate of movies that I did this last year was me consciously understanding that I'm 47," Ruffalo continues. "It might not get much better than this, as far as roles people will let me do. So upon understanding that I'd been holding back, I was like, 'No.' Everything now is to go for broke. To really put my ass on the line." He grins. "The poet Jack Gilbert has a great quote: 'Anything worth doing is worth doing badly.'"

It's working terribly well. Ruffalo is in the middle of a great run, with roles that bound and pivot from one to the next. In the past year, he was nominated for both an Oscar and an Emmy for, respectively, the tense drama Foxcatcher and the AIDS TV movie The Normal Heart. Oh, and his side career as a superhero – Bruce Banner/the Hulk, in the Avengers franchise – is also chugging along. Avengers: Age of Ultron continues to stomp over the summer box office, grossing nearly $1.4-billion (U.S.) worldwide, and the most aww-inducing stuff in it is his character's budding romance with Scarlett Johansson's Black Widow.

His upcoming films include Spotlight, based on the true story of Boston Globe reporters who uncovered sex abuses in the Catholic Church (it was shot in Toronto and Hamilton); and Now You See Me: The Second Act, the sequel to the 2013 magician caper, which grossed an unexpected $350-million.

"I like to change it up," Ruffalo says. "I don't want to be caught." In a rut, he means. Typecast. "I come from the theatre, where from play to play you can be a comedian, a tragedian, an historian. That's where I learned to act and that's probably where I'll go to die as an actor." (He studied at the Stella Adler Conservatory in Los Angeles and co-founded the Orpheus Theatre Company, where he wrote and directed as well as acted.)

In his new drama, Infinitely Polar Bear, Ruffalo plays Cam Stuart, the free-spirited scion of patrician Bostonians, a husband and father of two daughters, and a person with bipolar disorder. The autobiographical film was written and directed by Maya Forbes, a former writer for The Larry Sanders Show: Set in 1978 in Cambridge, Mass., it focuses on the erratic, often chaotic, but love-filled years when Forbes's father Cam was the primary parent to her sister and her, while their mother (played by Zoe Saldana) went to business school in New York. Forbes's daughter Imogene, 13, plays her younger self.

The film has been percolating since at least 1996, when Forbes and her sister China (the singer in the band Pink Martini) took China's then-boyfriend, the director Wes Anderson, to visit Cam at a psychiatric hospital. At one point Cam came out a door with two cigarettes in his mouth, and Anderson told Forbes that her father should be her next script. (Anderson was working on Rushmore at the time; those two cigarettes ended up in Bill Murray's mouth.)

Ruffalo didn't get to meet Cam; he died of pancreatic cancer in 1998. But he did get to watch a slew of 8 mm films that Cam made of himself, including one in the throes of a manic episode. "It was so ecstatic and alive, thrumming," Ruffalo says. "His breathing, and the wind was blowing. I kept going back to that. I know people who have bipolar disorder, so I've had, in some regards, a lifetime of studying it. But often what will give me a character is just two or three minutes of seeing something. So that [home movie] was really informative for me."

During the shoot in Rhode Island – in the spirit of going for it – Ruffalo let himself slide toward manic. He smoked a lot, slept little, experienced some depression. "A lot of manic people are a lot of fun. Too much fun," he says. "It's a bit overwhelming how alive they are. It can be very funny, as well as a bit frightening." So Ruffalo adopted Cam's "tight, pinched talking, his motor that was going all the time. I would get so tired, I'd just crash."

On breaks in the filming, Ruffalo's wife of 15 years, Sunrise Coigney, would note how speedy his temperament was, how he walked and talked differently. (The couple live in New York State with their three children.) "I'm like, 'I leave it at work!'" Ruffalo recalls, laughing. "She's like, 'You don't know what you're talking about.'

"But you have to open yourself up to a bit of it," he continues. "When you're shooting a movie, you're in that character's life more than your own. No matter how hard you try not to have that affect you, just by mere approximation, something is changed."

For Foxcatcher, for example, Ruffalo put on 30 pounds and ached from wrestling every day. "A lot of that stuff stays with you," he says. "You can't not do it. But what protects me is, I try to lift myself up into the material. I'm not pulling the material down to my life. I'm using my imagination to enter this world. So that, in a weird way, inoculates you. As soon as you start using your own life, that becomes corrosive to you."

Despite his determination not to be caught, Ruffalo does gravitate toward a certain type of role, "a modern American male, who's kind of disaffected, who has a problem with identity, that I really like." (Hello, Hulk.) Quite a few of his films – We Don't Live Here Anymore, Zodiac, The Kids Are All Right, Shutter Island – "are playing in that same area, and that's interesting to me."

Ruffalo's new commitment is working for him, too. "I feel like I grew up a little bit. I claimed myself. I got past some fear," he says. "I look around the world and think, 'Nothing that you can imagine cannot be created any longer.' Why not live our art like that, too? What are the limitations, really?" 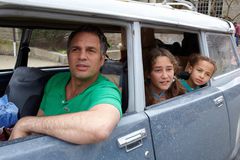 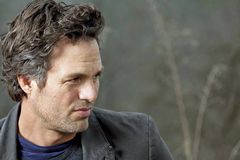 Film Review
Avengers: Age of Ultron blockbuster leaves us cheering for the villains
May 1, 2015 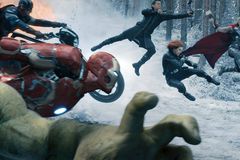 Foxcatcher: Three of this year’s best film performances, all in one movie
November 28, 2014