The lithe chap who blows into the Toronto hotel room bears no resemblance to the stiff military man, Sinestro, he plays in the new superhero blockbuster, Green Lantern.

Mark Strong's eyes are brown, not green. His ears are round, not Spock pointy. And his mostly bald head does not sport a lethal-looking widow's peak.

Indeed, the only trait Strong and the fictional anti-hero seem to share is the perfect posture and athletic frame that have made the British actor the go-to guy for directors who need believable villains to, say, test the mettle of Robert Downey's Sherlock Holmes, and now in Green Lantern, Ryan Reynolds's ring-wearing super dude.

Strong beams when told he's barely recognizable as the stern Sinestro. "That is the highest compliment I could possibly receive.

"What I enjoy best is if I can transform myself and look very different, and play very different from who I am," says Strong, in his lilting North London accent. "I do love playing the anti-hero, and I've played lots of them, because they're fun, pervasive, they get the best costumes, and the best lines. As Ryan [Reynolds]pointed out, all he needed to do to be the good guy was be the one to crack a joke, draw a punch, and kiss a girl. Villains, and the darker characters, need so much more psychological exploration, I think, plus I'm intrigued by them."

Fans of the 1940s-era comic book know that in the beginning of the Green Lantern story, Sinestro is, in fact, a good guy. But the lure of insurmountable power, contained in a gold ring, lead Sinestro to cross over to the dark side at the end of the film, setting up nicely what could be a Green Lantern 2, if the box office numbers continue to do well (it was No 1 this weekend).

"Initially it was the look of him that intrigued me," Strong says of the four-hour makeup sessions on set in New Orleans that blended nine different colour shades into his skin. "Sinestro is so iconic, so unusual, and that's what hooked me. But once I scratched the surface of the whole Green Lantern mythology, I got totally addicted. There are layers and layers to the comic book source material - which has been going on for 70 years. There are 3,600 Green Lanterns, and that's 3,600 potential stories right there."

Reynolds plays Hal Jordon, an irresponsible, exceptionally skilled pilot and ladies man who finds a fallen Green Lantern, in a space ship that has crash landed. A dying alien hands Jordan a ring, choosing a human (for the first time) to be his planet-saving successor. The film also co-stars Blake Lively as Carol Ferris, Jordan's co-pilot and childhood sweetheart, as well as Peter Sarsgaard, Angela Bassett and Tim Robbins.

Vancouver-born Reynolds has said that Green Lantern was the most physically demanding role he's had. And Strong agrees the Canuck carried the heavy lifting that the superhero stunts demanded. "Ryan had to work a lot harder than I did," says Strong. "He had to be very strong, have a lot of stamina, and he did a lot of flying. In one scene, Ryan was thrown 75 feet up into the air, with the camera filming above him. But remember, that did not happen in one take. Ryan had to do it about 10 times. I think he pulled his shoulder apart filming that."

Working with Reynolds, Strong adds, was a treat from the start. "When you come on board something like this, and you meet the guy carrying the can, it's great when he turns out to be collaborative, extremely friendly, and a gentle soul that doesn't suffer fools gladly. He's a perfect leading man, and a lovely guy to work with."

The 47-year-old says he isn't sure why for the past several years, the majority of his roles have involved playing characters who are essentially nasty pieces of work. "I haven't chosen the sinister roles, they've chosen me," says Strong, whose recently starred as the loathsome Sir Godfrey in Robin Hood, the mob boss Frank D'Amico in Kick-Ass, and the dastardly Lord Blackwood in Sherlock Holmes, with Downey.

The only downside of his journey to the dark side? His two young sons, Gabriel and Roman (six and three years of age, respectively) can't see any of his movies.

"The demands of villainous story lines means that I die, horribly, and often," he chuckles. "There was no way they could see Lord Blackwood hanged, that would be too much. And I die an awful death in Robin Hood, so I can't show them that either. But my eldest did see Stardust and now the younger one wants to see that as well, so I'm still trying to figure that out."

He will soon start shooting the small-budget crime thriller Welcome to the Punch with James McAvoy, and a still-unnamed Romanian film, based on the true story of a 1959 heist of the National Bank of Romania.

"What's lovely about being an actor is that you can cross-fertilize with these huge productions, the smaller ones. In a film like Green Lantern, you're a small cog, in a very big machine. The opposite is true in a smaller production. And I think it's vital to mix it up, just to keep life interesting." 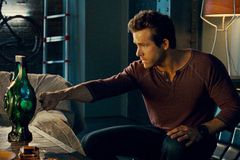