As Claire Edmondson tells it, her career as a film and video director began four years ago when she found herself stuck in Toronto with an injured knee. Or maybe it was that day in London a year or two earlier when she realized she was sick of working for Bono. Or maybe it was all those teenagers' funerals in Prince Rupert, B.C., back in the 1990s. The story behind the woman who may be Canada's next great film director is circuitous.

The thirtysomething Torontonian, who has created music videos for such indie artists as Broken Social Scene, Austra and Kandle, is now working on a satirical video series called It Girl that spoofs the music and fashion industries through the experiences of an exasperated TV host who wants to rise above the inanity of celebrity interviews. Edmondson originally intended it as a Web series, but when she approached funders, industry insiders were soon encouraging her to make a pilot for a TV show. "Nothing is confirmed right now, but it's definitely something" is how Edmondson puts it. "It's on a lot of people's radar; it's taken on a life of its own. I am very thankful for that."

In the enviable position of being acclaimed and courted for a project she has yet to produce, Edmondson herself is on a lot of people's radar. Although the would-be filmmaker is still shopping around for the right medium, she is already recognized for her fluid, cinematic style and a feminist approach that is simultaneously girly and politically assertive.

A former stylist for rock musicians, she is an arty music-video director who is trying her hand at both television comedy and short films with a career as unpredictable and diffuse as the massively disrupted media industries in which she works. It's an age when youth audiences are more likely to be watching webisodes than TV sitcoms; and when Much Music and MTV concentrate on reality shows, relegating the once-mighty music video to YouTube's low-budget universe. So, maybe it is also an age when the fashion designer who created Feist's iconic blue jumpsuit will become a noted auteur.

"There are not a lot of young up-and-coming female directors who have a stylistic approach like hers, rather than just trying to capture a trendy aesthetic," says Emily Alden, a Vancouver distributor and producer who headhunts new talent and who has signed on to executive-produce a short film for Edmondson. "What she will be able to do in cinema is what I am looking forward to."

Alden is talking about direction that is both indulgently beautiful, with lush camera work and rich styling, yet darkly critical of superficiality. Typically, Edmondson has her artistic cake and eats it too: Noting she shares a birthday with Hugh Hefner and Louis Vuitton designer Marc Jacobs, she recently posted a short video in which women dressed only in bras, panties and bunny ears cavort about with their Vuitton bags, flash their breasts and emerge from a fake cake, simultaneously critiquing fashion and celebrating their own hotness.

"I have an all-female crew and create this weird female energy on set. Women need their time in film," Edmondson says, noting that the world of commercials, where she still works as a stylist to pay the bills, is almost exclusively male.

Filled with cameos and inside jokes from the fashion and music industries, It Girl also has things to say about sexy "girls" who might rather be women. The series follows thirtysomething TV interviewer Wren Marlowe's disastrous attempts to grow up and rise above her superficial job: She describes herself as an adult who asks other adults what their pets are wearing this season.

It's a plot that reflects the frustrations of many a young woman trying to make her way in the media world. Edmondson's co-writer is Amil Niazi, a CBC news writer who wants to move into scripted; her star is Misty Fox, an actress and single mother who makes her living doing makeup on movie sets. As for Edmondson herself, she says, "Much of the show is based on my trying to get out of styling and be a director."

Born in Liverpool, she immigrated to Canada when she was seven and grew up in Prince Rupert. Fascinated by both film and fashion in her teens, she moved to Vancouver to study fashion, and then to Toronto, gradually building herself a career designing clothes for the city's indie rockers. Most famously, she created Feist's blue sequined outfit in the video for her 2007 hit 1234. "It became a bit of a cultural reference," she says, noting how U.S. comic Stephen Colbert pranced around in his own copy of the suit when Feist appeared on his show.

Having spent her youth regularly returning to England to see her father while her mother stayed in Canada working for B.C. Ferries, Edmonson eventually decided to take her career back to her homeland for a few years, working as a stylist in the British music industry. Her last contract was with the famed Irish rock band U2.

"Everyone said, 'That's amazing. You are working with U2!' and I was, 'Oh, yeah, I guess …' It was a huge sign, you know, when you are that disconnected from what you are doing."

In 2009, she broke up with the Canadian boyfriend with whom she was sharing her transatlantic life, came back to Toronto for a bit, and got stuck there when she banged up that knee. Sitting around recovering, she decided she wanted to be a film director. Knowing the music industry well, she figured making music videos was the fastest way to get a reel together and get some music-industry grants, and she made her first for flamboyant indie rocker Diamond Rings. "It was one of the best days of my life," she says of the shoot. "You get to run around and make things … I was finally in my natural environment."

From there, Edmondson has very rapidly built herself a reputation as a music-video director who gets attention with her consciously pretty, slightly spooky and often controversial imagery. Her latest rather dreamy video for Kandle features the young singer/songwriter swanning about a dimly lit, retro kitchen breaking glass on the floor.

"Claire has a very interesting aesthetic," says Aaron Miller of the Arts & Crafts record label. "Her videos are exciting enough to spark a response in a day and age where a thousand new videos are coming out every day. Most are forgettable. Hers are not."

Most memorably, in 2011, Edmondson created a video for Arts & Crafts's biggest act, Broken Social Scene, and their song Sweetest Kill. It featured lots of B-movie gore as a woman, played by Bijou Phillips, poisons her boyfriend, hacks his body to bits and buries them wistfully in a rose garden.

BSS member Andrew Whiteman, who wasn't involved in its production, created controversy that summer when he broke ranks with his band mates in the sprawling music collective and criticized the video as too literal an interpretation of the song. He has since apologized, but Edmondson felt he just didn't get it. "It's a breakup song; it speaks to that. What I wanted to address was: We don't ever see women killing; we see men killing. Killing is a giant metaphor for the breakup."

She wonders if the reaction to the obviously fake gore on Sweetest Kill did not mainly reveal that people are more comfortable watching men kill women. Anyway, the video did its job: It has gotten 500,000 views on YouTube, was screened at Toronto's Bell Lightbox, and has been shown at several festivals.

Her status as a cheeky observer of the worlds she inhabits is probably the result of that dislocated childhood, spent shuttling between Canada and Britain. Her taste for the macabre, however, is all thanks to northern life. "Prince Rupert was a very dark place to grow up. There was a lot of death," she says, recalling a small community where everybody knew everybody and there was a lot of dangerous behaviour among bored youths.

"Suicides, a lot of boating accidents, car accidents. One year, my brother had eight friends die … I went to a lot of funerals. When I make videos, it just sort of comes out. I don't do it to be controversial. Life is beautiful, but it is also really dark."

In Edmondson's gorey 2011 video for Sweetest Kill, a breakup song by indie darlings Broken Social Scene, Bijou Phillips plays a murderous girlfriend who chops a man to pieces and then buries the body parts in a garden.

Edmondson's video for City of Quartz, a new song from Toronto/Vancouver band Gold & Youth, is typical of her atmospheric aesthetic, featuring both menace and joy as a young skateboarder crashes in view of a barking dog and unengaged bystander.

Sharing a birth date with Hugh Hefner and Marc Jacobs, Edmondson creates a card for the occasion. One of her occasional fashion videos, the satirical romp features a bunch of bunnies showing off their breasts and their bags – Louis Vuitton, of course.

Watch the trailer for Claire Edmondson's It Girl
Canadian culture gets sexy – and dirty. Finally 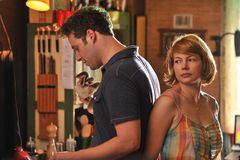 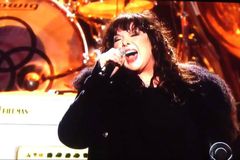