I think Melissa McCarthy is the bee's knees. When I interviewed her last month during the Toronto International Film Festival, my cheeks hurt afterward from grinning non-stop at her self-deprecating charm. She looked great: She was wearing a chic, swishy, black-and-white chiffon number and rocking the most appealing dimples in Hollywood – you just want to climb into them and see the world from there. For my money, she's the best thing about her new comic drama, St. Vincent. As Bill Murray's neighbour (and essentially, straight man), a struggling single mom, McCarthy grounds the film and gives it the emotion it needs to offset Murray's patented cool-dude-ery. (It opens in select cities today.) Yet I'm worried about her.

The clue is in that adjective, self-deprecating. We were talking about the hot-mess characters that McCarthy, 44, has been playing recently, some of whom she's co-written for herself with her husband of seven years (and frequent co-star), Ben Falcone. These include the crazed con woman in Identity Thief; the sloppy detective in The Heat, opposite Sandra Bullock, which earned a staggering $160-million (U.S.); the downward-spiralling title character in Tammy, which Falcone directed, and which netted $85-million this past summer; and the title character in Michelle Darnell, a new script she and Falcone just finished, which they plan to shoot next year.

McCarthy suggested that her willingness to throw herself around onscreen, her openness to anything that might get a laugh, stemmed from bombing so many times with the Groundlings, the L.A.-based improv troupe she belonged to for 10 years. "Bombing helps you not be precious," she said. "The gems, we barely remember those. When any of us get together, we only talk about the tanks."

She launched into a story about one Groundlings sketch she and Falcone did together: The second the lights came up on them in their matching outfits, she realized, to her horror, that the scene was disastrously unfunny. She butchered her way through a few minutes. But halfway in, she was so desperate to end the pain that she delivered a line as if it were the kicker – then nearly broke her neck by flipping herself backward off a riser. From her crouched position, she raised her hand in the air and made the pinching motion that indicated to the lighting guy that he should go to black. But he didn't. So after a few silent moments in which her pinching fingers waved wanly, she had to stand back up and finish the (now even more nonsensical) scene. "And I have a million of those stories," she concluded.

Her description made me laugh, but after we parted it stuck with me for a different reason.

McCarthy is an immensely likeable performer. She spent a lot of years making the most of single scenes in films, and being a smiling sidekick on Gilmore Girls. She won an Emmy for her series Mike & Molly. The self-deprecating characters she's playing are part of a long, honourable tradition of comedians, especially female comedians, using their own foibles and vulnerabilities as material, from Phyllis Diller and Joan Rivers through Tina Fey, Mindy Kaling and Lena Dunham.

But what rocketed McCarthy to the privileged position she's in now was Megan, the eccentric cousin character she played in Bridesmaids. The film's star and co-writer, Kristen Wiig, initially wrote Megan as more pathetic, but McCarthy twisted her into something fierce and unexpected by being so cocksure. The more unquestioned Megan's confidence was (no matter how unfounded), the funnier it was. The cast was full of winning comedians, but McCarthy blew them away.

In St. Vincent, McCarthy plays against type again. Her character, Maggie, whose son finds an unlikely hero in Vincent (Murray), is the opposite of outrageous – she's the one who makes sense. She has the film's best speech, describing her challenges to her son's teacher (Chris O'Dowd, also great), and she nails it.

But I'm worried about the type that McCarthy seems to be settling into: shouty, food-stained irrationals with rat's-nest hair and aggressively unflattering clothes. Her look may be "funny," but it's in such marked contrast to everyone else onscreen, whose perfect hair and makeup gleams, that it seems cruel. I mean, did Bullock have to look so much like a Barbie doll in The Heat – whose sequel has just been announced – and did McCarthy have to look so much like a troll? By saying yes too often to things that are too similar, McCarthy risks squandering the goodwill she built for so many years.

Raised in an Irish-Catholic family on an Illinois farm, McCarthy was always funny. "We have a funny family, especially my dad, who tells amazing stories," she says. At dinner every night, they would take turns talking about their days, and McCarthy loved nothing more than to make them all dissolve in laughter.

"That feeling – it was so great," she says. "I remember that kitchen, that table, I remember everything about it. I realized, it's a good thing to make people laugh if you can." She even loves the sound from strangers who have nothing to do with her. "If I'm in a restaurant, and I hear somebody really losing their mind laughing, it fills me with happiness," she says.

McCarthy is grateful that she's in the catbird seat, and humble enough to believe it could all disappear tomorrow. "At the end of every day I'm like, 'Well, it's been great, and I can always make kids' skirts or start a cooking company,'" she says. "I always think, 'What will I do tomorrow when I'll never act again?' Not in a negative way, just like, 'Well, it clearly can't last.' I feel like I've been on a magic carpet for four, five years. After 20 years as an actor, trying so hard just to get a job, I still have a muscle memory of things not working. While it's here, while I'm invited to the party, I feel I have to do everything."

I just hope, for her sake and ours, that she finds more Megans and Maggies, and fewer messes. 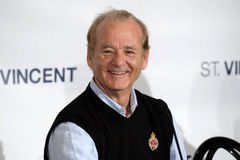