The director Michael Winterbottom knows that his new drama, The Face of an Angel, is going to drive a lot of people crazy. But that's his point.

The film, which opens in select cities Friday, looks like a fictionalized account of the November, 2007, murder of Meredith Kercher, a 21-year-old Brit studying in Perugia, Italy, and the trial of the roommate accused of killing her, 20-year-old American Amanda Knox. The crime made salacious headlines around the world (Sex! Betrayal! Death! Unsolved Mystery!), stayed in the news throughout the lengthy trial and appeal and has been the subject of at least 10 books, a telefilm and a documentary.

But it's not that simple. Winterbottom builds a multilayered puzzle box, starting with the media, who covered the trial, then adding an author (played by Kate Beckinsale) who wrote a book about how the media handled the case; and a director (Daniel Bruhl) who's making a documentary of the journalist's book. Because that's not complicated enough, Winterbottom has their stories flash backward and forward in time. And with every layer he adds, he asks more questions, while declining to provide answers.

"The starting point was, 'Why are we so fascinated with stories like this?'" Winterbottom said, sprawled on a sofa this past September, when his film premiered at the Toronto International Film Festival. He's 54, a handsome speed talker, with a hip haircut greying at the temples. His usually mellifluous British accent was clogged by a head cold. "This story is an extreme example of it, but why do we treat murder as soap opera? Why do we spend so much time watching or reading about crime, particularly violent crime and, even more particularly, violent crime with a sexual element? And is there such a thing as an 'appropriate' story to tell in cases like these?"

Part of what made this story so sensational was its context. The media, for example, were particularly ravenous, and the film reminds us why: After the financial crash of 2008, many newspapers closed their bureaus and competitive 24-hour online news services were on the rise. So the freelance journos who gathered to cover the case had to jostle to find material – there are several scenes of them wheeling like flocks of birds and running in panic down hallways – and then amp their stories to get attention.

In the course of researching and shooting the film, Winterbottom got to know some of the real journalists. "They've seen the film and agree it's accurate," he says. "They're all acutely aware of what they have to do to succeed as freelancers, that they have to package stories in such a way that people will buy them."

Adding to that, the Italian court that heard the case convened only two days per week, so the journalists would arrive every Thursday and spend the weekend working, drinking and hooking up, their own behaviour echoing the rowdy student life they were writing about. "Journalism comments on other people from what seems to be a moral high ground," Winterbottom says. "I wanted to show how the media exposes the scandal and shame of other people, yet doesn't do that so much for itself. But I didn't want to imply that filmmakers had the moral high ground, either. That's why I put a filmmaker in the story, who sleeps around as much as the journalists do, and is compromised in the same ways they are."

It's also a story of culture clash, as the American view of the case contrasts with the point of view of the Italians, which in turn contrasts with the Brits. "It reminds us that things we take for granted as being normal, correct or true are actually arbitrary," Winterbottom says. "Another person sees them a completely different way."

And then just for fun, Winterbottom tosses in a bit of Dante's Divine Comedy, structuring his film in the same tripartite way: Bruhl is guided through the "Hell" and "Purgatory" of the case by Beckinsale, and then finds his Beatrice (played by model Cara Delevingne, in a credible feature film debut), a student who helps turn him toward "Paradise" by reminding him what the story should be about: the young women whose lives were lost or ruined, and the grief of those who love them. "By the end, I hope you'd rather be thinking about those aspects, the love and the person lost, than the sensationalist speculation," Winterbottom says.

Such genre-hopping is not new for this director, though he usually does it from film to film, rather than in one movie. Best known for his hilarious road films The Trip and The Trip to Italy, he's also made a western (The Claim), a biopic (24 Hour Party People), a sci-fi take on Brief Encounter (Code 46) and a love story with real sex (9 Songs). He also recast Thomas Hardy's Tess in contemporary India (Trishna), and made a movie about the making of a movie about an unfilmable book (Tristram Shandy: A Cock and Bull Story).

"People are always asking me why I swap [genres] around, which perversely makes me want to swap around more," he says. "I just do what I'm interested in."

He does gravitate, however, toward films based on true events, often with journalist characters: Welcome to Sarajevo, about reporters trying to stay objective in Bosnia; A Mighty Heart, about Daniel Pearl, who was murdered in Pakistan; and the documentaries The Road to Guantanamo and The Shock Doctrine. "One thing that's good about films based on true stories – they allow you to tackle stories that aren't as conventional as purely fictional stories," Winterbottom says. "Film is a conventional storytelling medium. Everything is supposed to fit and make sense. But Meredith Kercher's murder is still unresolved. In a conventional fiction film, you'd have to have a verdict."

His approach to this story frees him from that. Nor does he try to answer his own question about our prurient fascination with crime stories. He just shows it to us, ring after ring of it, reverberating out. "It's like we tease you: Are you interested in seeing a film about this murder case?" Winterbottom says. "Then you get into the cinema and it's like, 'You shouldn't want to watch a film about a murder!'" He grins. "What a way to entice people in, eh? But try to avoid saying that in the article." Sorry, Michael Winterbottom. Your spirit of honesty compels me to include it.

Film Review
The Face of an Angel: Fictional take on Italian murder misses by a long shot
May 22, 2015 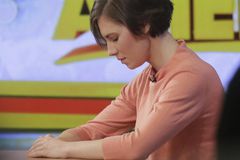 Knox's ex-beau after acquittal: Felt like I was kidnapped for 7 years, treated like a killer
April 14, 2015
Italy's highest court overturns Amanda Knox murder conviction, closing legal saga
April 14, 2015
A look at the Italian trials that produced flip-flop Amanda Knox verdicts
April 14, 2015
Follow Johanna Schneller on Twitter @JoSchneller
Report an error Editorial code of conduct
Due to technical reasons, we have temporarily removed commenting from our articles. We hope to have this fixed soon. Thank you for your patience. If you are looking to give feedback on our new site, please send it along to feedback@globeandmail.com. If you want to write a letter to the editor, please forward to letters@globeandmail.com.
Comments