Montreal movie makeup artist Adrien Morot praised his parents for letting him watch scary films as a tot after he received his first Oscar nomination Tuesday for work on Barney's Version.

Seeing all those frightening masks, makeup and prostheses on TV as a kid helped fuel a passion for his craft, he said.

"I was really fascinated with horror movies even when I was five or six and I was really lucky that I had parents who were supportive in letting me watch horror movies at that age," Morot said with a laugh in a phone interview minutes after learning of his nomination.

"Back then it was probably, 'Oh, your parents are so irresponsible,' and now with this nomination people will probably say, 'Wow, you were really fortunate and you had supportive parents.' So it's all a matter of perspective, I guess."

Morot, 40, is in the running for the Academy Award against a team of three makeup artists who worked on the film The Way Back, and two makeup artists from The Wolfman.

One of the nominated makeup artists from The Wolfman is Rick Baker, a six-time Oscar winner whom Morot calls a "special effects god."

"I've been following his work since I was like, 10 years old," said Morot. "Actually, he was the first one to write to me this morning."

Morot's Oscar nomination is the only one Barney's Version received Tuesday, even though its star, Paul Giamatti, recently won the Golden Globe Award for best actor in a musical or comedy.

Based on the Mordecai Richler novel, Barney's Version was shot in Montreal, where Morot created the film's prostheses and supervised hair and makeup.

Morot said he worked with director Richard J. Lewis on about 60 different design drafts for the main characters, who age several decades throughout the movie. He only had a month and a half to create the prostheses instead of the typical six months most makeup artists get for films.

Easing the pressure were Giamatti and his co-stars, who were open to suggestions and patient in the makeup chair, said Morot.

"Paul is a big, big fan of makeup actually, he's done a lot of projects where he was heavily involved in makeup," said Morot, a Genie and Gemini Award winner who has worked on over 90 other features, including 300, The Bone Collector and The Fountain.

"There are some actors who are very fidgety; (Giamatti) just stands still and he lets you do your stuff. He would say: 'Oh, you want to shave my head bald to make myself look older? Go ahead. Whatever you want to do, you just do it."'

Born in Montreal, Morot said he fell in love with makeup artistry after reading a Planet of the Apes comic book with a pictorial spread on the making of the prostheses for the film.

He started creating his own costumes at age seven after watching a Star Wars TV special at a neighbour's house.

"I remember as soon as I was finished I ran back home and I started making masks with cardboard and whatever else I could find at home, and that was really the start of it."

He now operates with a team of up to seven people out of his 278-square-metre makeup effects studio in Montreal, where he lives with his fiancee and 12-year-old son.

Telefilm Canada, which helped fund Barney's Version, congratulated Morot in a statement Tuesday, calling his nomination "a testament to the great talent both in front of and behind the camera."

For Morot, the honour just felt "so weird."

"As a kid my goal in life was to have one picture somewhere of one of my monsters or makeup in Fangoria magazine," he said. "And to have a nomination at the Oscars is so out of this world." 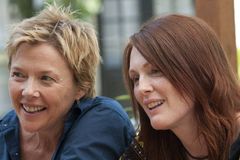