Last time out, in Fantastic Mr. Fox, Wes Anderson adapted a children's book by Roald Dahl. Now, in Moonrise Kingdom, he's made one of his own. Of course, his detractors (as ardent as his fans – this guy definitely elicits strong feelings) will counter that every Anderson film exists in some fractured fairy tale world, where dysfunctional adults never grow up but instead, infantilized in their psychic playground, do little more than teeter-totter between downright childish and merely childlike. Here, he's answered those critics by kicking his so-called grownups to the edges of the screen and investing their characteristics where they naturally belong – in a couple of actual 12-year-old children. This is their show, and they are its stars.

But if that investment is "natural," nothing else in this movie is, not even remotely. Even by his stylistic standards, Anderson has cranked up the artifice, starting with a trademark opening shot – a slow tracking, symmetrically framed, across the cut-out rooms of a clapboard home nestled by the sea. The place is New England on "the island of New Penzance," and the date is 1965, although not so you'd know it. In the parlour, their ears pressed to the radio, the children are shunning the Beatles for a whole other Britten – Benjamin – whose classic strains dominate the score. The time is clearly out of joint.

So are many other things, including the wondrous maturity of our young stars. Suzy (Kara Hayward) is first spotted peering through her ever-present binoculars – she sees further than the screwed-up adults around her, certainly further than her squabbling parents, his and hers lawyers who keep cross-examining each other. Mom (Frances McDormand) is having an affair with the local cop (Bruce Willis); for his part, Dad (Bill Murray) either doesn't notice or doesn't care – it amounts to the same.

In her own candid admission, Suzy is "depressed" by the domestic discord, and thus does what any smart 12-year-old would: She runs away. Her partner in flight is Sam (Jared Gilman), an orphan who bolts from his Scout troop, the one run with military rigour by its leader. That would be Scout Master Ward (Ed Norton), another suspicious mess – he's rather too fond of having little boys under his command.

Even for Anderson devotees, these early scenes will seem gratingly precious – the artifice just seems, well, artificial. But the charm kicks in when the kids take off, into the woods through the Labour Day weekend for their Late-Summer Night's Dream. Indeed, later on when a tempest brews over the island, the playful nods to Shakespeare grow more vigorous. And when Bob Balaban pops up as a Puckish narrator, the deal is sealed – this New England owes a magical debt to that old one, where sprites roamed free and young love triumphed.

So back to our star-crossed duo: Sam armed with an air-rifle, his glasses perched beneath a coonskin hat; Suzy with her blue eye-liner and pink polka dot dress and cache of romance novels; both on the cusp of adolescence and feeling those stirrings that are not yet carnal and not quite innocent but so immaculately pure. Love unblemished by experience, untainted by compromise. Who's to deny its worth?

Not us, at least not in a gorgeous scene by the title cove. There, on the secluded beach of Moonrise Kingdom, the pair garland their hair and a song leads to a dance which culminates in a kiss. Suddenly, the penny drops and we see the method in Anderson's mad fable: These kids are the true flower children, these are the sixties that never were but should have been.

The rest is an antic chase by search parties leading to the climax, where the storm breaks and lightning strikes. En route, the formidable senior cast – Murray, McDormand, Norton and Tilda Swinton as a robotic Social Services apparatchik – all seem to fade into the background, as slim as their damaged characters. But the callow hero and heroine, fixed in that precious moment of development when the heart speaks truths that the head has yet to deny, seize centre stage and our rapt attention. Especially when, on that moonlit idyll, he asks, "What do you want to do when you grow up?" and she simply replies, "Go on adventures." Such profound words at 12, and then so profoundly hard to live by. 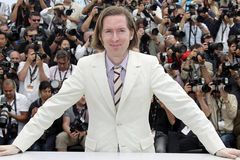