Even plucked from his gas-lit Victorian milieu, stripped of his familiar costume, of his chronicler Dr. Watson and even of his memories, the strength of Arthur Conan Doyle's supremely rational creation is that he is still always recognizably Sherlock Holmes.

In the present-day London of BBC's Sherlock, he is a twitchy, verbose savant with poor social skills; in the New York of CBS's Elementary, he is a brownstone-dwelling, tattooed hipster fresh out of rehab; and in the postwar Sussex of Mr. Holmes, he is an erstwhile celebrity in his dot age.

In the new film, director Bill Condon swaps the usual mise-en-scène of London's Baker Street for the bucolic retirement found in Mitch Cullin's novel A Slight Trick of the Mind, where, more than 35 years after his last case, Holmes (Ian McKellen) is suffering from rueful melancholy and "an outbreak of mortality." When the detective dismisses the chronicles of his career as "penny dreadfuls in an elevated prose style," he might be talking about Conan Doyle's casebook, the 56 short stories and four novels that are the source of the Sherlockian world, or of Watson's fictional Sherlock casebook within it.

Real or not, though, Holmes is one of the earliest celebrities of modern culture, one who interrogates the nature of art, authorship, reliable narration and public persona – and blithely critiques them all, eventually from both sides of the fourth wall. That makes his world uniquely suited to the literary spinoff, the non-canonical fanfic and liberal adaptation, over many generations and elastic according to audience, genre and taste.

During the sixties youthquake, for example, a cross-over concept with the historical Jack the Ripper case in A Study in Terror (1965) enabled a more graphic Holmes universe. The movie eschews the earnestness and decorum of mid-century adaptations (think Basil Rathbone's debonair wartime Nazi hunter) and restores some of the seedy elements in the original stories – though with a leering camera that plays up the slasher sexploitation angle of popular horror films.

The more traditional Sherlock of Mr. Holmes is 93 and struggles to set the record straight on his final case. In his senility, he becomes his own unreliable narrator, with McKellen's sharp physicality going from stately to stooped and back again in flashbacks between 1914 and 1947. As the fading detective trying to reconcile clinical logic with emotional intelligence, McKellen's performance is a master class in nuance that elevates the overly sentimental material.

Overall, Condon's movie seems deep without managing to be all that meaningful. Elements allude to tensions between fiction and reality, imagination and fact, and possibly the act of creating art, but they're merely a hackneyed pretext for an Easter egg of an allegory, as the nonagenarian investigates a murderous swarm of honeybees.

In The Great Detective, Zach Dundas's entertaining new cultural biography of Holmesiana, the lifelong fan explores some of these same preoccupations of the prismatic detective, while analyzing details of the original adventure stories themselves, underlining the ways in which they are "often arch, sly parodies of themselves."

That's in part what makes Holmes especially suited to the prevailing age of irony, the one ushered in by Billy Wilder's 1970 satire The Private Life of Sherlock Holmes, the sly spiritual uncle of the BBC's current mega-hit series with Benedict Cumberbatch. Another Wilder – Gene – no doubt influenced by the prevailing popularity of the Mel Brooks school of spoof, soon took self-reference further into the absurd and created a third sibling, Sigerson, for 1970's The Adventure of Sherlock Holmes' Smarter Brother, a misnomer farce with fart jokes. He was followed by John Cleese as his grandson Arthur Sherlock Holmes in a 1977 mish-mash, while Michael Caine played an actor hired by Dr. Watson, the real brains of the operation, to play the celebrity alter-ego in 1988's Without a Clue.

Holmesiana careened and veered so much that it inevitably had to be set straight again, with Jeremy Brett's 42-adaptation television run in the eighties. Unlike, say, the Marvel cinematic universe, Holmes became an almost open-source model of self-enhancing cultural material early on, and is constantly reinventing itself according to its time.

With flocked wallpaper amped up to camp, blackmailers are updated to privacy thieves and nefarious media barons in BBC's Sherlock, the apotheosis of arch. It approaches the canon on the diagonal, acknowledging the fandom by effectively, as filmmaker Guy Ritchie's streetwise 2009 version of Holmes might, drop-kicking the fourth wall in the teeth. In the Wilder, the detective remonstrates Watson for the literary embellishments, for romanticizing simple exercises in logic. "And you've saddled me with this ridiculous costume." "Blame it on the illustrator," Watson counters.

That's an explicit nod to how the author himself was open to dramatic licence – Strand Magazine illustrator Sidney Paget gave Holmes the indelible deerstalker hat and Inverness cape-coat that didn't exist in the text, popular turn-of-the-century stage adaptations by American actor William Gillette followed in which he donned embroidered dressing gowns onstage and infused the down-at-the-heels character with a louche glamour that has endured (most vividly in Rupert Everett's droll, dandy version of Holmes as a cross between Noel Coward and Oscar Wilde).

And "Elementary, my dear Watson" is a catchphrase that did not initially come from Conan Doyle but was cemented after he put down the pen and Holmes adaptations began circulating more widely for the first time in 1929, via the first Sherlock sound film.

One of the many other tweaks of the popular culture continuity is to send up Holmes and Watson's position as the most famously enduring bachelor roommates since Bert and Ernie. Again, Wilder dared that first, with Holmes played by the prissy, sardonic Robert Stephens, a rather obnoxious character who stands both inside and at the edge of the construct of the world he inhabits to wink at the audience.

If the otherwise dynamic, at times dizzyingly clever Sherlock bromance contains jokes that some fans contend are homophobic, Elementary is a more prosaic procedural that's subversive in other ways. Jonny Lee Miller's version plays to the slash fiction with Holmes as a libertine with a voracious, though tidily matter-of-fact, sexual appetite, for example. And while no one would accuse Conan Doyle or Holmes of feminism, in the third-wave era of Elementary, Watson is recast as a woman, one who is his equal (Lucy Liu), as is Holmes nemesis Moriarty – played by Natalie Dormer who (spoiler?) is an amalgam with Holmes's notorious former lover Irene Adler.

From every cycle of Holmesian irony, however, there seems an eventual return to contemplative realism, if not earnest nostalgia. Which is why several of the recent Sherlock forays such as Condon's Mr. Holmes tend to the elegiac. After all, twilight is also where we find the former detective in Michael Chabon's novella The Final Solution, and in Laurie King's Mary Russell series, aged but still active.

Conan Doyle might be surprised to discover that Holmes is just as exasperated by his creator. Dan Simmons's latest novel, The Fifth Heart, further turns the metafictional screw by uniting the detective with the real figure of Henry James. It is spring 1893, during Holmes's great hiatus, and throughout their crime-solving American adventure Holmes questions whether it is possible that he even really exists.

Yes, the consulting detective is a fiction, effectively making Mr. Holmes a middling biopic of a fictional character. But as the title of the recent Sherlock Holmes exhibition at the Museum of London points out, he's forever the man who never lived and will never die. 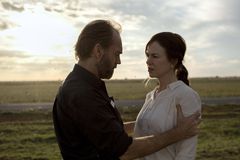 Film Review
Self/less: The wealthy can buy youth and health in this overdone genre
July 10, 2015 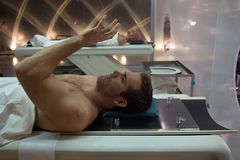