They are images of profound loneliness. They depict humans in the moment between life and death. And right now, I'm seeing lot of them. If there's a collective unconsciousness in cinema, this fall it is focused on individuals who are facing their imminent ends, isolated and alone, and pondering what meaning, if any, they find in their lives. (Note: Though I'll do my best not to reveal plot twists, I do describe scenes. If you're sensitive to spoilers, stop here.)

In All is Lost, which opened last week, a yacht skipper identified in the credits only as "Our Man" (Robert Redford) sinks slowly and silently into a dark sea. He is floating down back first, so we are able to see his eyes. They are wide open, so we have ample time to search them for what he's feeling: Is it fear, sorrow, resignation, farewell? Is his life passing before his eyes, and if so, was it enough? Can it ever be?

In Gravity, which has grossed more than $360-million (U.S.) worldwide since opening Oct. 4, two astronauts (Sandra Bullock and George Clooney) propel themselves through deep space toward an orbiting station. One makes it, but the other floats off into the void – becoming first a white spot, then a fizz of static, then nothing. Again, the audience is given time to ponder what that would feel like – how long the oxygen in the tank will last, what will happen when it runs out. Would the astronaut feel comforted or terrified knowing that his/her body will remain forever floating, alone in silent blackness?

In Captain Phillips, a true story that opened Oct. 11, the title character (Tom Hanks), who's been kidnapped from his cargo ship by Somali pirates, huddles bound and blindfolded in an enclosed metal lifeboat. As shots ring out, for one eternal second, he doesn't know if he's alive or dead.

In The Disappeared, which opened yesterday in Toronto, five survivors (played by Billy Campbell and Shawn Doyle, among others) of a fishing boat accident are stranded in two pale yellow dories with minimal supplies off the coast of Nova Scotia, unsure of which way to row. The fog rolls in and out. The sea laps against the sky. They are invisible. How long will they hang onto hope? How long would you?

Dallas Buyers Club, which also opened yesterday, offers a different vision of isolation. It's the true story of Ron Woodroof (Matthew McConaughey), a ne'er-do-well Texas electrician, rodeo rider and outspoken homophobe, who was told in 1986 that not only did he have AIDs, he had a mere 30 days to live. In the film, as his friends and his own prejudices turn on him, the most lasting image is McConaughey's gaunt body and hollow-eyed face (he reportedly lost more than 20 kilograms for the role). Can you fight death when it's already living under your skin, transforming your head to a skull?

The image that haunts me most comes from another true story, 12 Years a Slave, which opened Oct. 18. Solomon Northrup (Chiwetel Ejiofor), a free man from New York who's kidnapped and sold into slavery in Louisiana, is being punished. He's hanging from a tree by a noose that's just long enough that he can keep the tip of one toe on the ground. For hours, he chokes and gasps in the hot sun, struggling to remain conscious, literally suspended between life and death. His toe flutters up; he forces it down, again and again and again. Most chillingly, everyone in the household, fellow slaves included, calmly carry on around him, not even making eye contact for fear of eliciting the same punishment. What depth of will keeps him fighting to stay in the world, especially since the world contains people who think up and enact such tortures?

In a recent phone interview, I asked J.C. Chandor, who wrote and directed All is Lost (as well as the 2011 banking-crisis drama Margin Call), why he thinks so many films with the same themes have arrived at the same time. "I only know why I wrote my film," he said. "It was about a man searching for some sort of authenticity, and running from something. I wanted to show him literally coming to grips with his own mortality right before your eyes."

So what are we searching for, and running from? Collectively, the films offer some hints. In the background of each story is some kind of economic event, suggesting that our new global economy is precarious and even out of control. In almost every story, the characters have unprecedented access to – and dependence on – technology; a communications breakdown causes isolation and increases their suffering.

In the opening frames of All Is Lost, for example, Redford's posh yacht (he's sailing the Indian Ocean solo) collides with a wayward shipping container full of sneakers – it's the global economy run amok, both random and casually lethal. Then the water that spills into the gash destroys his communications equipment. In Gravity, Bullock and Clooney's ship is shattered by Russian space junk, which also wipes out satellite communication around the world. The Somali pirates who kidnap Captain Phillips want a piece of the international shipping fortune his freighter carries, to make up for the jobs they lost to unregulated commercial fishing, and to satisfy their new bosses, drug lords who are supplying the world with narcotics.

Though The Disappeared doesn't say so outright, its fishermen may be so far offshore because their nearer waters, too, have been overfished. McConaughey's character in Dallas Buyers Club imports illegal medicine because Big Pharma is more focused on its patents than a cure. And Northrup's character in 12 Years a Slave wouldn't be enduring a near-lynching and myriad other horrors if it weren't for an international economy dependent on slave labour.

The characters facing down these challenges are icons of self-reliance – the astronaut, the solo sailor, the ship captain, the fisherman, the cowboy, the free man. They're played by actors – especially Bullock, Redford and Hanks – who are Everymen Plus, like better versions of ourselves. We watch them, holding our breath, because we want to see if our old-fashioned values – of resilience, of inventiveness, of keeping calm and carrying on – still mean anything in our dizzying world.

Each film becomes a procedural of sorts, showing us the steps our heroes take to make it through. Hanks negotiates to keep the pirates calm. The fishermen sing to keep each other from panicking. Bullock talks to herself to keep from going crazy. Most stoically, Redford remains nearly silent, except for a radio distress call and one choice F-bomb. He keeps moving forward, even when his tools are going backward, from yacht to raft, from sonar to sextant.

So striking is Redford's silence that I had to ask: Doesn't Chandor ever talk to himself? "I don't, no," he says. "I wanted the character to represent that kind of classic American male version of what you're supposed to do in times of panic, which is buckle down and suck it up."

In an earlier era, resilience would be rewarded. The rescue ship would arrive, the hero would get home, the slave would escape, the disease would be staved off. In some of these films, that's still the case. But a few of them leave us in a darker, more ambiguous place, where some errors are too great to fix, and even the best intentions come to no good.

As for that loss of communication I mentioned – at one point in each film, almost every character tries to reach out in the humblest way: by writing something down on a piece of paper. The fragility of our connections adds to the stories' poignancy. We're all, these movies say, just a few missteps from blindly sending messages in a bottle.

Redford's character reads one such letter in the opening frames of All Is Lost. "That letter was the first thing that came to me," Chandor says. "I built the whole movie around that." Chandor had been in a near-fatal car accident at 19, and had vowed to not take life for granted. By the time he was in his 30s, "I had lost that," he continues. "I was letting certain parts of my life slip by without fully embracing them. So Our Man's letter is the letter I hope I never have to write. The unfulfilled goodbye, full of regrets and sorrow and apologies and things left unsaid. That's certainly not the way I want to go."

These films remind us that we're all going to die and, when we do, we'll probably do it alone. What we do before that day – in the larger world, and in our hearts – is only as meaningful as we make it. 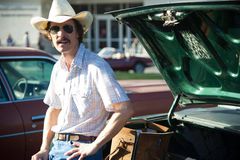 Film Review
The Disappeared: a haunting drama of men adrift at sea
November 1, 2013 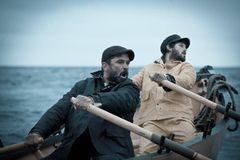 Film Review
All Is Lost: Robert Redford stars in an Old Man and the Sea for our times
October 25, 2013 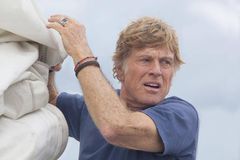