How many (male) writers does it take to inject some teenage feminism into a mildly raunchy comedy? For Neighbors 2: Sorority Rising, the answer is five: Nicholas Stoller (who also directs), Andrew J. Cohen and Brendan O'Brien, reprising their duties from 2014's Neighbors, plus Seth Rogen (who co-stars) and Evan Goldberg (Rogen's frequent collaborator). That's a lot of possibly-weed-enhanced brain power for this amusement, which feels engineered for repeat viewing: instantly forgotten when you rise from your chair, but fun enough while you're chortling at it that you may go back.

In this go-round – it's 30 minutes shorter than the original, and far better for it – we're back home with the Radners, Mac (Rogen), Kelly (Rose Byrne) and little Stella (Elise and Zoey Vargas). A few years older and a few weeks pregnant, they're selling their house and moving to suburbia. If, that is, they can skate through the 30-day escrow period without a hitch.

Cue the hitch. Fresh(wo)men Shelby (Chloë Grace Moretz), Beth (Kiersey Clemons) and Nora (Beanie Feldstein) just wanna have fun. But they can't smoke up in their dorm, sorority charters prohibit sisters from throwing parties in their own houses – a "this is true and outrageous!" fact that's repeated three more times in the film – and they're appalled by the sexist fraternity party they attend. "It was super-rapey in there!" Beth says, getting a laugh thanks to her cheery delivery. So with the help of Teddy (Zac Efron), who misses his happy frat days from the first film, they start a party-hearty sisterhood of their own – in Teddy's old house, right next to Mac and Kelly's.

The ensuing high jinks are the filmic equivalent of a cat playing with a ball of tinfoil on a string. It's unbelievably lazy – all those writers don't even bother concocting an inciting incident for Shelby to go to war against Mac and Kelly; she's just suddenly chucking used tampons at their windows. You can't believe how repetitive it is (young Stella's favourite toy is her mommy's pink vibrator, which shows up in scene after scene – does the cat never learn?). You have to create nonsensical obstacles to keep your interest (a long scene at a tailgate party, where Efron bewitches the ladies with a bare-chested dance so Rogen can steal the drugs they sell to make their rent, is both overfrantic and underdeveloped).

And yet, it keeps you laughing. Rogen and Byrne, whose normal looks provide an amusing contrast to their foul mouths, have perfected their overlapping dialogue; they quietly but insistently egg each other on in outrage and crudeness. Throwaway bits get great punchlines (watch for the "USA" chant that follows a marriage proposal). And a montage of Shelby's empowerment parties yields a lot of funny. (Beth, dressed as Oprah Winfrey, gleefully crying, "You get a beer! And you get a beer!" was my favourite moment.)

About that teenage feminism: Threaded throughout the action are some short but pointy jabs at rape culture, which actually make the movie about something. In addition to the ridiculous truth that sororities have to rely on fraternities to throw parties for them –with themes such as, as Teddy reels off, "Pimps and Hos," "CEOs and Executive Hos," and "Boise Boys and Ida-Hos" – there's a dark current of roofie references ("We got Cosby-ed," someone wails). When the young women strip away their false eyelashes, kick off their stilettos and dance in their socks, it feels like a victory.

Pleased as I am that the writing squad has had their consciousness raised an inch or two, I wish they'd gone tougher on cultural sexism, as well as further into feminist smugness (Nora manipulates Shelby by intoning, "They would never say you were too intense if you were a man"). Instead they deliver precisely enough guffaws to give you your money's worth, with a couple of sweet moments about how daughters break their parents' hearts tossed in. I guess they had to hold something back for Neighbors 3: Suburbia, a.k.a. The Cat Catches the Tinfoil. 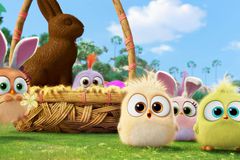 Film Review
Cliché-heavy The Man Who Knew Infinity is predictable and ordinary
May 20, 2016 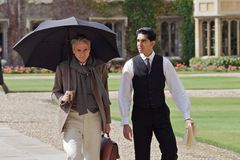 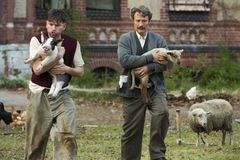