Imagine how this feels: The land and weather are turning erratic and dangerous. Warmer, unpredictable winds are coming from strange directions. Severe floods threaten to wash away towns. And native animals, the food supply, aren't behaving as they used to, their bodies less capable in the changing climate.

Even stranger is the fact that the sun now appears to set many kilometres off its usual point on the horizon, and the stars are no longer where they should be. Is the Earth shifting on its axis, causing the very look of the sun and stars to change?

These are the drastic conditions Northern Canadians, whose lives depend from childhood on their knowledge of the most minute details of the Arctic land and skies, say they see all around them. These observations by Inuit elders are detailed in a groundbreaking new documentary, Inuit Knowledge and Climate Change, by acclaimed Nunavut filmmaker Zacharias Kunuk ( The Fast Runner, The Journals of Knud Rasmussen) and environmental scientist Ian Mauro.

The documentary - screening at Toronto's imagineNATIVE film and media arts festival this weekend and streaming live at isuma.tv - is the first to ask Inuit elders to describe the severe environmental changes in the Arctic they are seeing and to do so in their own language. The tone of the film is intimate. The elders aren't trying to cross a language barrier, or even speak to the Southern scientific community. They're simply imparting their expert knowledge and wisdom - and the result will undoubtedly cause controversy.

"Over the years, nobody has ever listened to these people. Every time [the discussion is]about global warming, about the Arctic warming, it's scientists that go up there and do their work. And policy makers depend on these findings. Nobody ever really understands the people up there," Kunuk says.

It quickly becomes clear that the film, which blends scenes of Inuit life with elders sharing their insights, is an invaluable document. The elders describe in precise detail how seal, for instance, a staple in their diet, are behaving troublingly due to the thinning ice, how warmer winds are changing the snow and ice banks, making overland navigation difficult, and how major floods are hitting communities.

Yet the elders talk about all this without anger, only a tinge of sadness. Kunuk says this is an Inuit characteristic, based on the belief that the world is forever changing, whether at the hand of man or through natural cycles. "We know for a fact that way up in the high Arctic, there are mummified tree trunks [showing that the Earth's climate was once totally different] Also, when Inuit hunters talk about animals, they always talk about cycles, everything goes in cycles. We just have to adapt to it."

However, the faintest trace of anger does arise when the elders talk about polar bears. Contrary to what conservationists and scientists say, the elders interviewed in the film believe the polar-bear population is increasing. They say more bears finding their way into communities, and the animals are being traumatized by scientists, who are putting radio collars around the bears' necks and doing other research that disturbs their natural life, usually spent in almost total isolation and silence.

Most startling for the filmmakers, though, was the Inuits' belief that along with pollution and environmental changes, caused mainly by Southerners, the Earth has actually changed its tilt. The filmmakers kept hearing this theory in different communities. Perplexed, they contacted the U.S. National Aeronautics and Space Administration for answers, but experts said this was impossible.

When the filmmakers presented some of their findings at the Copenhagen conference on climate change last year, the media picked up on these views of the Inuit subjects, film co-director Ian Mauro says, and alarm bells started to ring in the scientific community. "We had a litany of scientists come back to us, responding after seeing this news, saying, 'This was great to be speaking to indigenous people about their views, but if you continue to perpetuate this fallacy that the Earth had tilted on its axis, [the Inuit].... would lose all credibility.' And so there was really this backlash by the scientific community."

Still, the Inuit insist they see changes in the sun's course and the position of the stars in the night sky. "These elders, when they were growing up, they were told to go out every morning, before having anything to eat. They were told to go out at the age of 5 every morning to observe the weather," Kunuk says. "So when they started talking about the sun and the sunset, I was puzzled too. Everywhere I went, each community, I was getting the same answer: The sun does not settle where it used to. I mean, it [causes]alarm."

The scientific explanation is that the warming Arctic air is causing temperature inversions, which in turn cause the light of the sunset to refract so that the sun appears to be setting a few kilometres off-kilter. "There is so much garbage in the air, it's refraction that's causing our elders to think our world has tilted," Kunuk says.

But the filmmakers don't include that scientific explanation in the film, nor any other comments from the scientific community. Instead, the film deals strictly with the elders' observations and their belief that they have no control over climate change and they simply have to adapt.

"We have to. We have no choice," Kunuk says, repeating the elders' quiet words.

Inuit Knowledge and Climate Change plays Toronto's Al Green Theatre, 750 Spadina Ave., Saturday at 7 p.m., as part of the imagineNATIVE film and media arts festival. The film will be simultaneously streamed on www.isuma.tv. 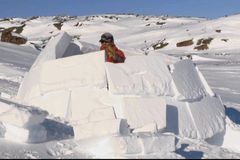 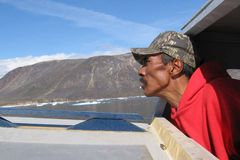