Only two years after announcing it would achieve gender parity in its portfolio before 2020, the National Film Board of Canada has exceeded that goal.

Figures to be released on Tuesday show that women directed 47 per cent of NFB films in 2017-18 while men directed 38 per cent and mixed teams accounted for the remaining 15 per cent. Also, 48 per cent of funds were spent on projects directed by women while 38 per cent were allocated to films with male directors and 16 per cent went to mixed teams. (As the NFB seeks to groom women for the director's chair, the percentage of mixed directing teams has jumped to 15 per cent from 5 per cent in one year, largely accounting for the lower number of solo male directors.) Numbers for completed projects funded during the fiscal year ending March 31, 2018, also show that 47 per cent of the screenwriters were women.

Announcing the results, NFB chair Claude Joli-Coeur argued that these initiatives have immediately broadened the board's portfolio to powerful effect. "At the end of the day, we all benefit from these parity objectives, since they improve the quality and variety of the works," he said, pointing out that over the past year, 60 per cent of the 132 awards the NFB has won went to works made by women.

As scrutiny of gender equity in the male-dominated film industry intensified in the 2010s, the NFB announced two years ago that it would achieve parity. The goal was within reasonable reach: Alongside its famed animation, the Montreal-based NFB produces a lot of documentary film, a more easily accessed and less expensive area of endeavour than feature filmmaking, and one where women are heavily involved as directors and writers.

In stark contrast, the great majority of big-budget Hollywood dramas are directed by men, as are major Canadian feature films. While the billion-dollar Hollywood industry mulls over the problem, national film agencies including Telefilm Canada and the pioneering Swedish Film Institute have started tying public funding to equity.

As a public producer rather than funder, the NFB's structure gives it a distinct advantage here. It is the sole producer on seven out of 10 of the projects that carry its brand, providing most of the funding and initiating many projects itself or exercising significant creative control, determining which films get made and who makes them.

Telefilm, the national funding agency, is at a further remove, providing only a fraction of a film's budget and selecting from projects presented to it. Telefilm is moving toward parity in the smaller-budget films it assists, but has yet to release the 2016-17 numbers for films with budgets of more than $2.5-million, where much less progress is expected.

Last year, the NFB expanded its equity goal to include other creative positions, and there, women still lag behind: The 2017-18 numbers record that 38 per cent of film editors were women – an increase from 24 per cent the previous year.

However, in cinematography, a male-dominated profession that is often a stepping stone to the director's job, the number held roughly steady at 13 per cent, while female composers dropped to a mere 4 per cent from 13 per cent.

NFB titles created by women in 2017 include Alanis Obomsawin's 50th film, Our People Will Be Healed about the Cree community at Norway House, Man., and Threads, a new short from Oscar-winning animator Torill Kove. Both were selected for the Canada's Top 10 Film Festival at Toronto's TIFF Bell Lightbox in January.

The NFB also produced A Better Man by Attiya Khan and Lawrence Jackman, a shocking personal documentary about domestic abuse; Karine Lanoie-Brien's Expo 67 Live, a multimedia recreation of the Centennial exhibition in Montreal; 24 Davids, Céline Baril's documentary about men with that first name, and Marie Clements's screen adaptation of the stage show The Road Forward, a hybrid documentary about Indigenous creativity and performance.

Playing it safe (but for Frances McDormand): Kate Taylor on the Oscars
Subscriber content
March 5, 2018 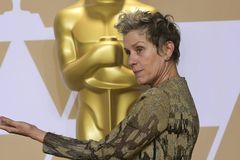 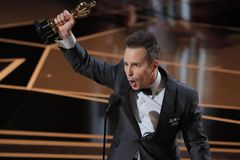 The Shape of Water takes best picture, while Frances McDormand and Gary Oldman nab top acting awards
March 4, 2018
Follow Kate Taylor on Twitter @thatkatetaylor
Report an error Editorial code of conduct
Due to technical reasons, we have temporarily removed commenting from our articles. We hope to have this fixed soon. Thank you for your patience. If you are looking to give feedback on our new site, please send it along to feedback@globeandmail.com. If you want to write a letter to the editor, please forward to letters@globeandmail.com.
Comments are closed