Olympia Dukakis didn't sign on to the new movie Cloudburst, written and directed by Thom Fitzgerald (The Hanging Garden), because of its sexual politics, though politics do underpin the story: Stella (Dukakis) and Dot (Brenda Fricker), lovers of 31 years, go on the lam to Nova Scotia because they can't get married in their native Maine. And politics are a big part of Dukakis's life: Cousin to 1988 U.S. presidential candidate Michael Dukakis, she's a lifelong liberal who's advocated for many causes, including women's rights and the environment. "But if the story in Cloudburst didn't have the things in it I wanted, I wouldn't have done it," she said this week in a phone interview.

Her personality is potent, even over the phone; her passionate, funny, wised-up remarks come through in capital letters, especially when she agrees with you – "It WAS, it was a LOT of fun," she'll say. Or, "You feel like something's gonna HAPPEN." You imagine that she could persuade anyone of nearly anything.

"I look for movies that are about something, that not only have a plot, they have a STORY," she continues. "Don't get me wrong, the fact that the politics were there was important to me. Hey, I was the co-Grand Marshal of the gay parade in San Francisco a couple of years ago. But I'm not going to do something that isn't good just because the politics are right."

She didn't want to play Stella for the hair and wardrobe, that's for sure. Stella is 81 in the film – the same age as Dukakis – and her experience of her sexuality is shaped by the era in which she came of age. "The butch/femme mentality was part of her youth, and Stella and Dot had to be closeted and secret," Fitzgerald said in a separate phone interview. He had to talk Dukakis into Stella's hairstyle (short, grey and mannish) clothes (oversized plaid shirts) and dialogue (ribald and expletive-laced). But once she embraced it, she went all the way. During one scene, in which Stella has to knock a naked man off her truck's windshield, Dukakis improvised a line so colourful that Fitzgerald had to call cut to ask her where that came from. "She said, 'Oh, I used to say that all the time, growing up in Lowell [Mass.]. Rough town,'" Fitzgerald recalls. "She's a total gas."

"I love transforming," Dukakis says. "It's the fun part of acting. It's the easy part, actually. But it's getting harder and harder for actors to do. You have to have a LOOK, it has to be CURRENT, the body has to look this way. This is the enemy of transformation." (One thing she didn't have to change: "Stella drinks tequila and lime because Olympia does," Fitzgerald says. "I hardly ever see her without tequila being involved.")

Really, Dukakis did this film for the two reasons she does everything: because of her relationships with people, and because she wanted to. Cloudburst is her third movie with Fitzgerald; she did the first, The Event, because its writers were friends of her daughter's. (She also has two sons, and has been married to their father, the actor Louis Zorich, for 50 years.) "The budget on that was $300,000; I think I got paid 42 cents," Dukakis says. But she befriended Fitzgerald, and also her co-star, Sarah Polley, with whom she'd make Away From Her. Her character in the latter film uttered a line, "I'm trying to decide to be happy," which sticks with Dukakis today.

"I kept that idea, that happiness is a decision," she says. "'I'm going to do today the things that will make me happy, I'm not going to focus on this or that.' There's a lot of leftover stuff in the back of the refrigerator; you don't have to eat it." When she laughs, it's like a wave that picks you up and carries you along.

"I just focus on the things I want, and I don't waste too much energy on things that aren't useful or relevant," she says. "I'm not saying I'm always right, but for the most part I am." She arrived in New York City in the 1960s, with an MFA from Boston University and a dream to "play the great parts and travel the capitals of Europe. I had a 19th-century vision of myself." She laughs again. "But all I could play here was Italians and Jews. I realized that, the things I wanted, I was going to have to make them happen myself."

She and Zorich founded two theatre companies, the Charles Playhouse in Boston and the Whole Theater in Montclair, N.J.; they acted together in several productions, and she also distinguished herself as a director and producer. She taught acting at NYU, and occasionally works with former students. "There's such a thing as payback in this business," she says. "People have stepped out for me. If I find somebody that has talent, I step out for him.

"To sit and complain, 'Oh, they don't see me, they don't know me, my agents aren't whatever' – it's pointless," Dukakis continues. "It's a well, you keep pouring crap into it, but it has no bottom. I tell my students, 'Don't wait around, make it yourself. What do you want to DO? You've got a play, put your friends together, find a bar, go do a reading! Begin the process, take hold of it.'"

Unusually for an actress, Dukakis became famous in her 50s, when she won an Oscar playing Cher's mother in Moonstruck. A stream of ladies who tell it like it is followed, including Mrs. Madrigal, the transgendered landlady in the miniseries Tales of the City, and Stella, whom she loves for "how rebellious she is, how she fights tooth and nail to hold onto what she has." This summer, Dukakis will play the lead in Mother Courage – a role she's done before – at Shakespeare & Company in Lennox, Mass., (home to the Tanglewood Music Festival). "I kept telling my husband, I think I've got one more in me!" she says.

If there is a political bent to Dukakis's recent choices, it may be this: She gravitates toward roles that kick against the desexualization of older people. "I think that's true," she says, "because it's true FOR ME. I still feel sexual. Part of my personality is sexuality, at 81, yes it is. I'm not ashamed of it, I'm not proud of it, it's just who I am.

"But I tell you, this thing of growing older," she goes on. "The usual thing people say is, 'It's not for sissies.' You think everybody's supposed to get wise. But there's a lot of stuff you have to process and deal with that is full of drama. You've got a lot of baggage, and sometimes it doesn't let you sleep, sometimes you try to put it down and you can't. Not to mention that everybody in your generation is dying. I think at 81 you have to give yourself a break; you have to let yourself be whoever you are. It's a little late to worry now." 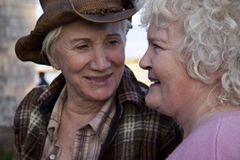 Some naked truths about film nudity: Are you listening, Seth MacFarlane?
March 1, 2013 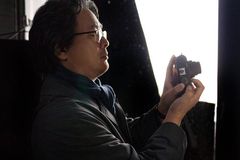