In the early 1940s, the U.S. Office of Strategic Services recruited a group of German-speaking Jews to infiltrate Nazi-occupied Europe. That sounds a lot like Inglourious Basterds, Quentin Tarantino's 2009 revenge fantasy. While the movie was fiction, its premise was based in fact: Clandestine operations were mounted by well-trained, highly motivated Jews in German-occupied Europe.

Of these, arguably the most successful was Operation Greenup, chronicled in a new documentary by Toronto filmmaker Min Sook Lee (it airs Thursday on History TV). And its story, the real story, is much better than Tarantino's. As someone says in the film, "The truth is way stranger than fiction."

The pairing of a Korean-Canadian director with a Second World War story about Jews and Nazis is less strange than it might seem. Lee's upbringing, on streets once populated by the city's immigrant Jewish community, exposed her early on to cultural stigmatization. Her professional work to date, in film and elsewhere, has championed the rights of minorities. And like every good filmmaker, she knows a great story when she hears it.

The OSS-recruited cadre was largely made up of young Jews whose families had escaped Europe for America before the war. Their language skills – fluency in German and other continental languages – conferred obvious advantages for infiltration. On the other hand, their lives were clearly on the line: If caught by the Gestapo and exposed as Jews, they would have been summarily executed.

In the dead of winter, 1945, German-born Fred Mayer, Dutch-born Hans Wijnberg and former Wehrmacht officer Franz Weber parachuted into the Austrian Alps. Weber, a Catholic, had deserted, convinced that a Nazi victory would be disastrous for the world. His family lived in a village near Innsbruck, the hub of the Nazis' Tyrolean war machine, and were willing to shelter the two Americans.

By that late phase of the war, German forces were already in retreat. But they had fortified their positions around Innsbruck, and were rumoured to be building a vast underground fortress that would enable them to continue the conflict indefinitely.

The Allied goal was to end the fighting as quickly as possible. To that end, Greenup's principal mission was to gather intelligence about Nazi troop movements, train schedules and ammunition depots that would enable Allied bombers to disrupt supply lines to the battle front in Italy.

Wijnberg, the group's radio operator, holed up in an attic in Weber's village. Mayer donned a German army uniform and melted into the beery bonhomie of the local officers club. There, loose-lipped Nazis casually spilled precious information, including precise details about Adolf Hitler's Berlin bunker, German warplane production, and the movement of men and materiel through the Brenner Pass.

Weber's sisters risked their own lives to play courier, ferrying the data to Wijinberg, who coded it for transmission to Bari, the OSS's Italian base. Later, posing as a French electrician, Mayer obtained papers that allowed him to infiltrate an underground munitions plant. Subsequently captured and tortured, he never divulged the names of his fellow spies.

Armed with his information, Allied squadrons were able to wreak havoc on enemy supply lines, attacks that led to the surrender of German forces in Innsbruck and, by shortening the war, saved thousands of lives. Former OSS director William Casey later called Greenup by far the most successful covert mission mounted out of Bari.

Born in South Korea, Lee, 43, immigrated with her family to Toronto at the age of 4. Her father, a former military spy, worked at odd jobs and eventually opened a convenience store. She came to filmmaking through social activism, beginning, while still in her teens, with a film project about the anti-apartheid movement.

"That was both an inspiring and a motivational experience," Lee said in a recent interview. "You were able to see real change in your lifetime. It's important for activists to celebrate victory, as opposed to feeling that you're never going to get anywhere."

Lee says her childhood on lower Spadina Avenue in Toronto was formative: It was a "a classic, working-class immigrant experience" that exposed her and her two sisters to racism every day. "We were called all kinds of names in the streets, and you go from that to seeing the systemic racism." Only 12 when her mother passed away, she, and her sisters, were "left in the urban wild," rebelling against a loving but authoritarian father.

Although she continued to engage with class and gender politics, Lee says she always had "trouble being a card-carrying member of organizations and following rules." She eventually landed a job as news director of CKLN, Ryerson University's community-oriented radio station, and used it to program around social justice issues. "That was dynamic and formative, a hands-on intense experience in learning about media.

Then, with no formal film training – "I'm not afraid to make mistakes" – she talked herself into a job as an assistant to film producer Sylvia Sweeney. After working on a few TV series, Lee pitched a documentary on migrant farm workers in Ontario to the National Film Board. "I wanted to cut through the fog machine, the noise, of mainstream media."

The film, El Contrato, was made, but got hung up in legal red tape, and was not released until 2003.

Afterward, bartending to make ends meet, Lee became an on-air presenter at Toronto One, a short-lived local TV station. "It was crash course in how to produce media I'd never want," she says. "I went from spending three years on one doc to churning out a new magazine-like piece a week. Then, because they ran out of money, I started reporting on traffic accidents. It was not me. I was playing at being a reporter."

Lee has spent the past several years assembling a body of award-winning work, including The Real MASH, based on the people who inspired the fiction TV series; Tiger Spirit, about the division of Korea; Hogtown, an examination of the politics of Toronto's Police Service Board, and Badge of Pride, about gay cops; and, more recently, a TV comedy series, She's The Mayor, that she created and wrote.

She stumbled on the Greenup storyline while researching another documentary for History. "It's not only a story of bravado," she says. "It's really a story of friendship, loyalty and love, three young men with nothing in common who risk their lives for each other. They torture Fred Mayer to force him to give up the name and location of his radio operator – and he doesn't. He's ready to die. That, to me, is what's compelling. In our youth-oriented culture, you may walk down the street and see an elderly person and instinctively sort of write them off as irrelevant. In the case of these three men, you'd be writing off men who changed the course of history." 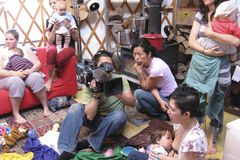 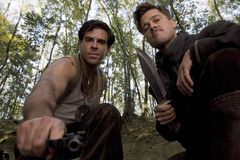