Oscar-winning director Paul Haggis will arrive in Toronto the same week that an epic article in the New Yorker hits the stands, detailing the Canadian's acrimonious split from the Church of Scientology in 2009, many years after he joined the faithful flock with the likes of Tom Cruise, John Travolta and Anne Archer.

The article by Lawrence Wright - who is penning a book on the rift - states that Haggis defected from the controversial church after it refused to publicly denounce Proposition 8, which bans same-sex marriages in California.

As Haggis tells the magazine, his youngest daughter, Katy, from his first marriage, "lost the friendship of a fellow Scientologist after revealing that she was gay."

So, when Haggis steps onto the stage Wednesday at the TIFF Bell Lightbox for a conversation with Lightbox artistic director Noah Cowan, the audience will be on the edge of their seats to see if the subject is broached.

Asked recently on the phone from New York to explain why he cut ties with Scientology, Haggis refused to bite. "I don't talk about that," he said politely, but firmly (the sole interview the 57-year-old filmmaker has granted on the topic is with The New Yorker). He did clarify, however, that earlier reports that he was co-authoring Wright's book, called The Heretic of Hollywood: Paul Haggis vs. The Church of Scientology, were wrong.

"I have absolutely no interest in writing a book on Scientology."

It was time to move on. In fact, he was on the line from New York because, among other scripts, he's working with his eldest daughter Alissa on one called Cell 211, adapted from the searing prison drama that won best picture at the 2010 Goya Awards.

Haggis agreed to chat with Cowan in Toronto, not about any disillusionment with Hollywood's favourite alternative religion, but about his writing and filmmaking career, which started on TV ( Due South, Diff'rent Strokes, Thirtysomething) before moving into film, and eventually the directing big leagues: 2005's Crash, which netted the Oscar for best picture and original screenplay.

The London, Ont., native says that five words - spoken years ago by jazz great Miles Davis - have helped guide his movie-making approach. "He said, 'It's hard to play slow.' And those words have stayed with me because the same holds true for film."

"When you have people running and jumping, it's pretty easy to keep an audience interested," says Haggis, who also penned 2004's Oscar-winning Million Dollar Baby. "But when you have someone just sitting, thinking, well that's a lot more difficult."

"My films have all been challenging for different reasons," he continues. " Crash was tough because we had such a short schedule and so many actors. The Valley of Elah was such a quiet film, and it's difficult trying to keep suspense in a moment where nothing is going on, and the camera is just sitting there. You're truly relying on your actor to bring out the subtleties that will keep an audience intrigued."

One of Haggis's favourite themes to explore cinematically is the "wonderful contradiction" of human beings. "I truly believe there is no such thing as a hero or a villain. There are people who do villainous acts, and there are people who do heroic acts. But when you really get in and explore them, you'll find that the hero may have been the villain the day before. Or the villain may have been the hero."

His next film, he adds, reverts to the six-degrees-of-separation theme explored in Crash - but with a twist. This time, Haggis says he's focusing on three strangers whose lives are intertwined, "but not in the way you might think."

Often, though, the inspiration behind a script is the contradictions and flaws in his own psyche. "I have an endless fascination with myself," Haggis says, only half-jokingly.

"There are many things that trouble me about myself, and questions I can't answer," he says. "And those things tend to play out in my scripts. They could be in the centre of an action adventure film like Casino Royale or in a film like Crash, which is so much darker. But if you find me in a screenplay I will usually be the villain."

That seems a rather harsh self-assessment from a guy who recently co-founded Artists for Peace and Justice in Haiti, set up to improve schools and hospitals and provide access to clean drinking water. Not to mention a keen environmentalist and proponent of children's literacy.

But Haggis says he's lived long enough to see darkness in light, and white in black.

Again, the finger itches to push the Scientology button. But Haggis will not rehash that painful journey (or path to enlightenment, depending on your interpretation).

With the church no longer a driving force in his life, Haggis says his primary passion is his four children, three girls in their 20s (Alissa, Lauren and Katy with first wife, Diane) and a 12-year-old son, James, with current wife Deborah Rennard.

"They're the source of most of my inspiration," he says. "And they certainly are the part of my life of which I'm most proud."

The New Yorker reports that after Haggis resigned from the church, he sent a letter to many Scientologist friends, including Archer and Travolta - who he thought would "be as horrified as I was." That turned out to not be the case, he told the magazine: "They were horrified that I'd send a letter like that."

But despite the fallout from that feud, Haggis remains upbeat.

"I like to think of myself as a cynical optimist. I certainly know that we live in an impossible world, and that our heroes will often disappoint us, and our friends will often betray us. But I guess I just somehow continue to have faith in the goodness of man. It sounds cheesy, but it's true." 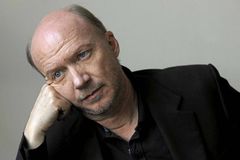 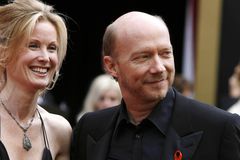