Paul Thomas Anderson has never asked himself why he wanted to be a filmmaker. He wouldn't know where to begin, he said in a phone interview on Wednesday from Los Angeles (where he was born, and where he lives with his partner, the actress Maya Rudolph, and their three children). All he knows is, it's the only thing he's ever wanted to do.

"Ever since I was five or six years old, according to my mother," Anderson says. "I've never had a desire to do, and I've never done, anything else." He pauses. "It's weird. God!" He laughs. "Any predictions I might have made when I was a kid, doing little drawings of movie cameras or film sets, never included – I remember seeing Steven Spielberg's films. I thought I'd make films like Steven Spielberg's."

Instead, he writes and directs films that are singularly Paul Thomas Anderson's, right from his first, Hard Eight (1996), a crime thriller starring Gwyneth Paltrow and John C. Reilly. "I was 23 or 24 years old, and the youngest person on that set," remembers Anderson, who had no formal film education. "I was so nervous, looking around at the crew, that they were going to figure out that I was an imposter and didn't know what I was doing."

In press conferences, Anderson tends to seem a little uncomfortable and look a little shaggy (wrinkled shirts, patchy beard, greying hair that's simultaneously flattened down and sticking up). In conversation, however, he's much warmer, more frank and game. He really listens to your questions, and thinks about his answers, often unleashing a little volley of agreement as he does so: "Well, sure, sure-sure-sure," he'll say, or, "Absolutely. Huh. Absolutely!" His enthusiasm for his profession is palpable: "There's nothing like that thing that happens when a movie curtain opens up," he says at one point. "The first few moments, no matter what the film is, that thrill. I love how you discover the same film differently at different times, how they move and drift in your brain."

His latest, The Master, came out last week, and is already one of the most hotly debated films of the year. It's beautiful, stately and deliberately unnerving, raw emotions captured in a strict cinematic formality. Like There Will Be Blood, it's the story of two men locked in one another's psychic embrace – a Second World War navy vet, PTSD sufferer and poisonous alcoholic (Joaquin Phoenix), and a charismatic cult leader, based on Scientology founder L. Ron Hubbard (Philip Seymour Hoffman). Their lives are enriched and ruined by one another, and they draw the audience into their mutual madness. (Yes, Anderson assured reporters at the Venice Film Festival, he screened it for Magnolia star and Hubbard advocate Tom Cruise, and they're still friends.)

"I suppose it's all based on wanting to try to not do the same thing twice," Anderson says of his filmography. "To not get comfortable. Whenever I finish a film, all I know is that I don't want to do it like that again."

For The Master, he used a 70 mm camera – usually reserved for epics – to film tight close-ups, which he holds extra-long, to deliberately discomfit. "It's fun to use equipment in a way you're not 'supposed to,'" he says. "But it looked right and felt good. I like being rattled when I walk out of a movie. Getting into that trance-like state, that's something I've always loved. I find a story and try to get it to that place where it's, hopefully, thrilling for an audience to watch. So they're screaming at the screen, 'Don't open that door!' That's what films should do, isn't it?"

Asked how he repeatedly pulls career-best performances from his actors, Anderson answers modestly: "I pick good ones. When less experienced actors come in, if they're nervous, I always panic. I don't know what to do to help them. But when you get a great actor, you're collaborating with someone; you're helping them by being a good audience, or a monitor of what might be going too far, or not far enough. Philip and Joaquin are both independent thinkers, and do a lot of the work on their own. Neither feels a need to overrehearse. I was so proud of what was going on most of the time we were shooting. I was particularly smitten with Amy [Adams, who plays Hoffman's Lady Macbeth of a wife]. She was kind of the teacher's pet – I kind of couldn't take my eyes off what she was doing. Everybody was giving so much." He chuckles. "That said, there's probably an outtake reel of some very horrendous acting that I could show you."

The freedom to fail is necessary, he insists, especially when shooting scenes so intense they could easily tip into risible. A bad day can galvanize the cast and crew to "come back to work supercharged the next day, to try to hunt again."

"You can stand there feeling as if a scene has completely fallen apart, and you're just wasting film," Anderson says, "and then you find yourself in the editing room six months later, and see something that you need in the story, that you weren't aware had even happened. You thought it was – I'm looking for the metaphor here – a big pile of horseshit on the floor, but you dig through it and there's a diamond in the middle of it. It just makes the whole thing that much more fun and elusive. As soon as you think you know what you want, or you're getting good at it, it will teach you differently. That's what keeps me coming back."

The same is true of writing, Anderson says. On his blocked days he'll lie on the couch, read a book, "stare around at stuff," watch TV (he keeps Turner Classic Movies on all day, so even if he's not watching it, it "seeps into my veins"). "And research," he adds. "I probably wrote this movie in two weeks and researched it the rest of the time."

His touchstones for The Master include Let There Be Light, a film about a veterans hospital; "a really weird book called American Patriot by Bud Day," who wrote about coming back from the Second World War, Korea and Vietnam; Time and Again, by Jack Finney, "a novel about time travel that is so sweet, so sentimental – I mean that in a good way;" some early pamphlets on Dianetics; and a magazine called The Aberry "that was really good in terms of getting inside that period, and people who were interested in any kind of spiritual movement, whether it was yoga or handwriting analysis, that would help them uncover why they were here.

"There's no shortage of good stuff from this era," he continues, "that postwar mix of optimism and an incredibly large body count behind you. How can you feel great about being victorious with so much death around you? So all the talk [in the film's cult] about past lives, the afterlife, they were great ideas, hopeful ideas, and fascinating to me to write a story around."

One shooting day especially stands out. He shot the first half of the film in San Francisco, and on the last day there, July 10 to 11, 2011, crammed in several scenes, some of which were later cut: Phoenix's character jumping off a battleship, swimming in the bay (the temperature was near-freezing, so the actor got hypothermia), walking through a party of sailors, making out with a girl in the backseat of a car. "Then we ran over to this old 1950s hiring hall," Anderson goes on, his delivery picking up momentum, "shot another scene, which is not in the film but it was so great, middle of the night, all these guys dressed as sailors looking for work. From there, ran to get a sunrise shot of the Golden Gate Bridge. Stopped at McDonald's. Drove to Woodside, got this shot of Joaquin walking in the forest. Hopped a plane to L.A, got home." At that point Rudolph, who was pregnant, told him, "I think it's time to go to the hospital."

"So we went to the hospital, and had my son, Jack," Anderson concludes, laughing. "That was a great day. That was a great, great day." Should anyone ask him again why he became a filmmaker, I think that day's his answer. 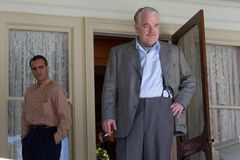