I hate to disillusion you, but I think Ray Liotta's menacing vibe is just an act. True, he knows how to use it: During September's Toronto International Film Festival, where he was promoting the upcoming contract-killer drama The Iceman, he did his thing. At a press conference, he growled at a reporter who was rude to his co-star Winona Ryder. When the presser ended, he strode out on his own time, while the rest of the cast huddled in the green room waiting for the route to be cleared. At the after-screening party, he skipped the red carpet and slid in the back door, which meant that he was relaxing with a drink while his cast mates were still doing interviews.

He's certainly made a living out of playing scary. His bad cops, grinning criminals and leopard-print-underpants-wearing mob bosses pop up regularly, in movies with titles like Unlawful Entry, Narc, Revolver, Smokin' Aces, Crazy on the Outside and of course, Goodfellas, his best-known role. In his latest, Killing Them Softly, which opened yesterday, he plays a mid-level mobster who suffers a vicious beat-down against a car. According to The New York Times, the sound that the foley guys used as Liotta's body slides from the hood to the ground is that of a squeegee wiping a windshield. That does not bode well for his character's future.

In person, however, once you get past Liotta's mug and mien – those thin lips, that scarred skin, his taut alertness and his blasting-cap laugh – he could not be friendlier or chattier. "I have no idea why I'm cast [as so many reprobates]," he says. "I've never been in a fight in my whole life. I'm not that kind of personality. I've played a lot of nice guys, too. Dominick and Eugene – I was nice." (He took care of his disabled brother, played by Tom Hulce.) "Field of Dreams – I didn't hit Kevin [Costner] in the head with the bat." (Liotta played Shoeless Joe Jackson.) "I think the bad guys just stand out."

Liotta was born in Newark, N.J., in December, 1954, and his first acting job was on the soap opera Another World, "where I was the nicest character in the world," he says. Ah, Joey Perrini – I remember him well. I tell Liotta that my friends and I had crushes on him. "Oh, really?" he asks, looking surprised. "Good old Joey. You must have been a kid. I mean, a kid-kid." (Untrue, I was in high school. But I didn't dissuade him.)

He left the soap in 1981 and moved to Los Angeles, where for the next five years "nothing happened," he says. He did guest shots, failed series. Then he heard that director Jonathan Demme was looking for someone to play a violent ex-con opposite Melanie Griffith in Something Wild. At the time, Griffith was married to a pal of Liotta's. He asked her to get him an audition, nailed the role and a persona was born. Since then, his longest gap between jobs has been a mere eight months.

A few days after our conversation, Liotta was heading to Nashville to play another nice guy – "a preacher, in one of the most beautiful scripts I've ever read" – in a family drama called The Identical, about musically gifted twins who are separated at birth. He launches into a long, passionate description of the plot, peppered with asides about the Golden Rule, Sesame Street ("They know it's easier for a kid to learn by singing") and adoption. "I'm adopted, so the fact that I'm now playing a dad who's adopting somebody, it just hits me at the core," Liotta says. "But you don't have to be adopted to find it beautiful."

I tell him that my mother was adopted, too, and suddenly we're not doing an interview, we're having a conversation. "Did your mother feel like she was given up, or like she was chosen?" he asks. "My parents [Mary, a township clerk, and Alfred, an auto-parts store owner] adopted me when I was six months old, and they told me about it right away. But I still felt like I was given up."

At 43, keen to have a child of his own, Liotta sought out his birth mother. "It was a trip," he says. "I found out she'd already had a child with the same guy, but he didn't want to get married. He went off to the Korean War, they got together again when he came back, I came out, they took me home. And they realized they couldn't afford it. So I was bonding with her, and, boom, they ripped me away."

Meeting her as an adult, however, changed the way he felt. Driving home afterward with his then-wife, the actress Michelle Grace (they co-starred in the telefilm The Rat Pack and divorced in 2004) and a male friend who'd just adopted two children, "it was pouring, pouring rain, and I wasn't saying anything for a while, because I was like, whoa," Liotta remembers. "I'd found out that I have five half-sisters, a half-brother and a full sister. Finally my friend asked me, 'What do you think?' I said, 'Man, I'm so glad I was adopted.'" His friend "just broke down crying, he was so relieved to hear that."

When Liotta's daughter, Karsen, was born 13 years ago, he made one vow: "I promised myself I wouldn't care if I spoiled her or not." He grins. "And I don't care."

He feels the same about his roles: Sweethearts or psychos, Liotta doesn't care, as long as the script is good enough. "It's a crazy, crazy, whacked-out business, and I love it," he says. He has films lined up through 2013, including The Place Beyond the Pines and Better Living Through Chemistry, opposite Ryan Gosling and Sam Rockwell, respectively.

Liotta says he likes to immerse himself at work, "to live what I'm playing. If I'm playing a nice guy, I'm great on the set. If I'm not, I'm a dick. I'm sure I'm going to be unbearably wonderful while I'm playing the preacher." To deal with co-stars "who come in with preconceived notions of who I am, the ones who just want to talk about Goodfellas," Liotta's developed a technique. "You know how they have stand-ins when they're doing the lighting?" he asks. "I always do my own standing-in. That way I stay in the zone, and nobody asks me anything, except to move left or right."

He grins again, and this time it's the predatory one he's famous for. "I've learned how to keep a distance from people when I need to," he says. "I'm serious about playing pretend."

Film Review
Killing Them Softly hits us over the head
November 30, 2012 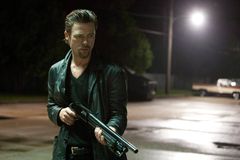 TIFF movie review: The Iceman
September 10, 2012
Not a lotta Liotta, but a few big deals
October 5, 2005
Follow Johanna Schneller on Twitter @JoSchneller
Report an error Editorial code of conduct
Due to technical reasons, we have temporarily removed commenting from our articles. We hope to have this fixed soon. Thank you for your patience. If you are looking to give feedback on our new site, please send it along to feedback@globeandmail.com. If you want to write a letter to the editor, please forward to letters@globeandmail.com.
Comments