What big eyes and lips Amanda Seyfried has. And what nice cheekbones Julie Christie, who plays her grandmother, has. Unfortunately, these are about the only outstanding features in Red Riding Hood, a lust-lacking Gothic teen reworking of the fairy tale from director Catherine Hardwicke that does nothing helpful for either of its talented stars.

The swooping cameras over the British Columbia evergreen forest is our first clue that Red Riding Hood is a sheepish copy of Twilight, the mega-hit franchise, starring Kristen Stewart and Robert Pattinson, a franchise that Hardwicke launched in 2008.

The script by David Leslie Johnson ( Orphan) reworks some elements of Beowulf, with a medieval somewhere-in-Europe mountain village named Daggerhorn that is plagued by a man-eating supernatural beast. The village's resident hottie, Valerie (Seyfried), has a more pressing problem. Her parents (Virginia Madsen and Twilight's Billy Burke) won't let her marry her childhood sweetheart, the local woodcutter, Peter (Shiloh Fernandez). Instead they think she'll advance herself socially by getting hitched to the blacksmith, Henry (Max Irons, son of Jeremy).

When Valerie's on the verge of running away with her woodsman beau, her sister gets killed by the wolf. After a couple of generations of keeping the creature at bay by sacrificing livestock, this alteration in wolf behaviour is worrisome. Also, Henry comes to pay his respects and press his marriage suit, and the first of several unintentional laughs results.

With its stilted dialogue, fragments of voice-over and over-busy camera, Red Riding Hood feels off-kilter from the start. Things pick up marginally with the arrival of a werewolf expert, Father Solomon, played by Gary Oldman, speaking in a meandering German-Slavic accent as he chews the scenery. Father Solomon promptly creates general panic by explaining that the beast is a werewolf who lives among them in human form, changing each full moon. What's more, the upcoming ultra-rare "blood moon" means someone's soul is about to be taken.

A showman who brings with him two African bodyguards, a planetary model and an elephant-shaped iron torture device, Father Solomon doesn't seem like someone you should dismiss. Nevertheless, the foolish villagers, who have beheaded an ordinary wolf by mistake, choose to have a big party instead, with a lot of Burning Man-style chanting and drumming. Not surprisingly, they have an uninvited guest - a smudgy-looking CGI-generated beast, which takes a moment out from its rampage to telepathically speak to Valerie.

This raises her suspicion that the werewolf, in human form, must be someone close to her. Suspicion falls on one character after another with a certain monotonous predictability. Could it be the Peter, the woodsman with the black gelled hair? Or perhaps the handsome and self-effacing Henry with the soft bangs? Or perhaps Valerie's oddball grandma (Christie) who has a habit of growling and feeding her granddaughter bowls of dark, lumpy soup. Judging by the plot, the major ingredient must be red herrings.

Apart from Valerie's crimson cape, which looks pretty when she's running against snowy landscapes, there's not much else that's red about Red Riding Hood. With its rating-conscious care in avoiding displays of gore, the movie even manages to strip away the gruesome delights of the original children's story.

Catherine Hardwicke: a director not afraid of the big bad wolf
March 11, 2011 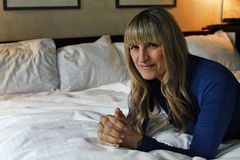 A modest defence of price gouging at movie theatres
March 11, 2011
From fairy tales to scary tales: Hollywood embraces dark fantasies
February 17, 2011
Follow Liam Lacey on Twitter @liamlacey
Report an error Editorial code of conduct
Due to technical reasons, we have temporarily removed commenting from our articles. We hope to have this fixed soon. Thank you for your patience. If you are looking to give feedback on our new site, please send it along to feedback@globeandmail.com. If you want to write a letter to the editor, please forward to letters@globeandmail.com.
Comments