Thoroughbreds, set in an affluent enclave of Connecticut, is about the horsey set and, in particular, two young women who were childhood friends and are now recently reunited. Impeccably groomed Lily (Anya Taylor-Joy) lives in a marble mausoleum of a house with her mother, stepfather, some servants and enough stone busts to keep an antiquarian busy for years. Amanda (Olivia Cooke) is not quite as well-heeled, but she's still upper-crust and we meet her in a stable with a horse that is soon found brutally euthanized.

First-time writer-director Cory Finley's Thoroughbreds is not for the faint of heart. It's a psychological thriller that explores what human nature is capable of when drained of all empathy and remorse, surviving instead on practised smiles, crocodile tears and self-serving impulses. Amanda is charged with bludgeoning the horse and has been ostracized. She's a social outcast with a borderline personality disorder and her mom, desperate to get her out of the house, pays Lily to entertain Amanda for a few hours, under the guise of studying for their SAT exams. Hardly a dupe, Amanda immediately sees through the ruse and tells Lily she should have held out for more than $200. "She would have easily paid you $500." Lily is both appalled and intrigued by Amanda, who is incapable of feeling human emotions. She can't cry, laugh or shed a real tear.

She's the antithesis of the prettily packaged Lily, who spas with her mom, attends the best boarding school and has landed a sought-after internship. At least, so we are told. But Lily's back story – as with her gilded life – is full of holes. Inured eventually to Amanda's narcissism and mordant sense of humour, Lily confesses that she loathes her stepdad, Mark (Paul Sparks) and could imagine him dead. Thus begins the darkly comic plot of revenge – a plan the girls hatch for no real good reason except that spoiled Lily wants it and the cold, rational Amanda can't see why not.

For a debut effort, Finley, who adapted the film from his stage play, does an admirable job of moving the action primarily through deft, witty exchanges between the two main characters as they try to reconnect after many years and find a new footing now that they're supposedly mature. The cold emptiness of Lily's family home is emphasized through a percussive score that mimics the sound of a heartbeat. There are arrythmic drums that emphasize the house's hollowness. Grey, filtered light makes the grounds beautiful but colourless. There is a Hitchcockian creepiness in Finley's mad-as-hell teen drama.

But eventually, the thumping undertone gets monotonous. Besides the drums, Finley uses the sound of a rowing machine, echoing through the manse-like house, to escalate tension and build drama. Soon, however, the incessant rowing – as Lily's aggressive stepfather takes to the machine day and night – just gets annoying. We understand that there is evil in this house. That the situation is fraught. But the director falls back on those overused scene-fixers to compensate for film noir that begins to flounder in the second half.

Both Cooke (Me and Earl and the Dying Girl) and Taylor-Joy (The Witch) are superb at playing spoiled femme fatales who have been given everything and – because of that – appreciate nothing.

The film benefits, too, from the casting of the late Anton Yelchin, who plays a hapless, small-time drug dealer and registered sex offender whom the girls try to blackmail into murdering the stepfather.

Squirrelly haired and gaunt, Yelchin's Tim is supposed to be reprehensible, but in the end, he's more sympathetic than these narcissistic young women ever could be. 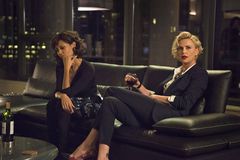 Review: The Strangers: Prey at Night is one heck of a hack-and-slash fest
March 8, 2018 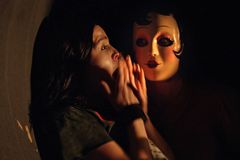 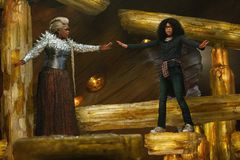