Given the despairing state of contemporary movie-going, the hype greeting newcomer Ari Aster is, to some extent, understandable. When Cineplex slates loaded with sequels and reboots and aspiring “franchise tentpoles” crowd out anything remotely resembling mature entertainment, filmgoers may be forgiven for settling upon a filmmaker of such obvious talent, as a starving man may gobble down a half-melted Mounds bar.

The fervour that met Aster’s auspicious 2018 feature debut, the family horror calling card Hereditary, had a tendency to blot out the film’s problems: namely, that Aster’s considerable discipline in matters of plot, acting and exactingly manicured mise-en-scène resulted in a film that, for all its shocks and bravura performances, felt a little too controlled, as if its borderline braggadocious style was compensating for a lack of genuine terror. (The Bond-villain-esque exposition in the film’s finale was particularly egregious.) Hereditary is a film that demands attention in a “Dude! You gotta see this!” sort of way. But not the sort of horror movie that slithers under the skin or keeps one up at night.

Aster’s follow-up, the no-less auspicious Midsommar, predictably arrives in a miasma of excited enthusiasm that risks clouding out both film and filmmaker. This film expands the cultish folk-horror elements of Aster’s debut, following a group of PhD students to a remote Swedish village to take part in a solstice festival that only occurs once every 90 summers. Like Hereditary, Midsommar’s plotting is so laborious that divulging even basic plot points exposes one to accusations of “spoilers.”

So suffice it to say that one of the wayfarers, Dani (Florence Pugh), suffers an unspeakable personal tragedy early on, further straining an already uneasy relationship with her boyfriend (Jack Reynor). That Reynor’s character is named Christian might offer even a modestly savvy viewer a clue as to how he’ll fare among a gaggle of Scandinavian pagans. It also signals one of the problems that bogs down Midsommar. For all its hysterics – Aster’s ability to evoke command performances from hyperventilating women is downright Von Trierean – Midsommar feels utterly passionless. From the moment Aster’s camera inverts on its axis as a rental car drives into the scraggly Swedish woods, as if to announce that we are now through the looking glass, to its fiery finale, the film is drained of effect. Once our posse of American revellers arrive in their remote destination, we’re assured their fates are sealed.

For all its pretensions of psychological depth about the nature of trauma and the dilapidated shape of a crumbling relationship, Aster’s interests lie elsewhere. Like Toni Collette’s miniaturist in Hereditary, Aster is ultimately more concerned with rigorously art directing and painstakingly presenting his story. In this respect, Midsommar is no doubt remarkable. Even in the age of sprawling “cinematic universes,” it’s rare to see a movie that feels so comprehensively imagined and lived in: from its unsettling murals depicting bizarre rituals, to the realization of those rituals, from its elaborate Runic alphabet to a thrillingly choreographed dance number which unfolds like maypole bop by way of The Red Shoes. It’s all shot through with a low-dose psychedelic energy, that sees surfaces gently throbbing and wiggling, stoking a general air of unsettlement that never really veers into real terror.

That Midsommar is being billed as “a relationship movie” may ultimately speak more to the expectation that modern genre films should be about something. (See: the manner in which the 2018 remake/reboot of Halloween was pitched in the press as a film “about trauma,” as if the original films weren’t about precisely the same.) Aster himself should not necessarily be forced to reckon with such unfair expectations.

The problem, however, is not just a grinding hype machine, but that Aster himself flicks at these deeper human concerns, as if to justify his interest in the aesthetic bric-a-brac of occult horror films such as Häxan, The Blood on Satan’s Claw, Kill List and, yes, The Wicker Man. Meanwhile, all the intimations that Midsommar may seriously explore the dissolution of a romantic relationship are left unsatisfied. There is little sense that Dani and Christian’s devotion is being tested by their predicament as sacrificial lambs in this raucous pagan pageantry and absolutely zero sense that it will serve as a trial through which they might pass en route to reconciliation.

As in Hereditary, the relentlessly persnickety quality grates. And not just because one senses that there’s an obnoxious, show-off vibe animating Aster’s intensively composed dioramas of human suffering. It’s because such control allows for no excess, no remainder, no terror lingering after the screen cuts to black and a cutesy music cue plays under the credits (The Sun Ain’t Gonna Shine by the Walker Brothers, FYI).

When the virginal police sergeant is – spoiler alert! – ritually torched in the closing scene of Robin Hardy’s original Wicker Man, the viewer is suspended into a state of ambivalence, torn between identifying with the burning figure of enlightened Christendom and the grimacing pagan hippies who light him up. Midsommar musters no such productive uncertainty of feeling, nothing in the way of genuine horror. There is only cruelty and coldness, draped in billowy peasant gowns and wreathed in radiant garlands. 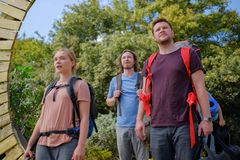