Canada is so often disguised in the movies – Bay Street is Wall Street; Old Montreal doubles as historic Europe – that it’s bracing to see Steeltown just playing its regular self on screen.

Atom Egoyan’s Guest of Honour takes place in Hamilton, Ont., where the east-end smokestacks still belch while downtown slowly gentrifies. This real and gritty setting is the backdrop for a baroque story about an over-zealous food inspector with an eagle eye for rat droppings and a daughter who has been jailed for allegedly sleeping with one of her teenage music students. Guest of Honour may be a refreshing film, but it boasts a definite yuck factor, too.

In the title role, British actor David Thewlis plays the neurotic Jim, sorrowfully patrolling local lunch counters and cavernous ethnic restaurants looking for any stray hair or unrefrigerated meat. He produces a magnificent portrait of rigidity, repression and simmering anger as a widower who is trying to figure out why his daughter, the high school music teacher Veronica (Laysla De Oliveira), is willingly doing jail time for a crime he doesn’t believe she committed. That side of the story is much less satisfying, told through strained prison visits, an improbable confession to a local priest and shadowy flashbacks. As the story of the corruptible inspector takes wild flight, that of the repentant teacher limps and lurches.

Read more: Guest of Honour’s David Thewlis has a serious case of the creeps, in the best kind of way

In the restaurant story, Egoyan maintains full control of his sometimes overwrought symbolism. Jim threatens to close a restaurant when he discovers it processes its own rabbit meat before going home to stroke Benjamin, the pet that Veronica has left in his care. The tension, both intense and bizarre, reaches a fabulously unusual climax as Egoyan’s wife and long-time collaborator Arsinée Khanjian appears as the Armenian restaurateur with the illegal meat. She mounts a celebratory private dinner – complete with fried rabbit ears – as an elaborate charade to explain away all those dead bunnies in her kitchen. And Jim is the guest of honour.

Speaking of Khanjian, Egoyan once drew purposefully understated performances from his leading ladies – from her again and again, from Gabrielle Rose in The Adjuster and Sarah Polley in The Sweet Hereafter. Here, instead of that unforgiving blankness, De Oliveira seems merely flat, initially a character insensitive to those around her and eventually a performer unresponsive to her co-stars.

She begins, more or less convincingly, as a supercilious hottie who becomes the target of both her teenage students and their bus driver. (An impressive Rossif Sutherland makes the man understandably resentful.) Veronica is painfully oblivious to her effect on men, and when the band trip goes badly awry, she is accused of seducing one of the students. As the jailed woman, who apparently feels she deserves to be punished for some episode in her past, De Oliveira produces a recalcitrant façade that is more confusing than mysterious. By the time she appears in a flash-forward threaded through the film and featuring her conversation with the sympathetic priest – Luke Wilson labouring away in a stock role – she has become a mere cipher.

In part, the performance is the fault of Egoyan’s own melodramatic script. It turns on Veronica’s improbable incarceration. In reality, a teacher would lose her job for sleeping with a student under 18 and might even be charged with sexual exploitation, but would be unlikely to wind up in prison. And it relies on ostentatious flashbacks to the traumatic events of her childhood and adolescence, heavily signalled with subdued lighting punctuated by mote-filled beams. There is a difference between emotional repression, which Thewlis delineates clearly, and the lack of emotional motivation that seems to hamper De Oliveira’s Veronica. It’s a disappointment that all the weirdness and woolliness of this film serves its male protagonist so well while its female lead struggles to put emotional weight on her side of the scale.

Guest of Honour’s David Thewlis has a serious case of the creeps, in the best kind of way
Subscriber content
July 21, 2020 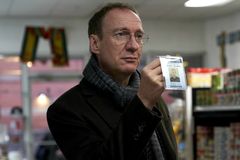 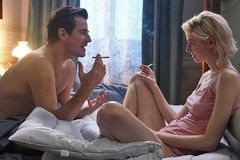 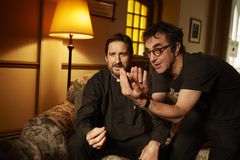