I know it’s pointless to review the film they didn’t make. But underneath this clangy, pounding, speedy, thin, energetic confetti-shower of a movie is a collection of missed opportunities begging to be noticed.

Female rage is a timely topic, and every female character here has good reason to be angry. Our lead, Harleen Quinzel (Margot Robbie), was abused by her father and the nuns in her Catholic school. She became a therapist, fell in love with a patient – psychopathic villain the Joker – and transformed into Harley Quinn, a prison-tattooed, parti-coloured punk princess, the kind of gal who adopts a pet hyena, pukes into a stranger’s purse and stops mid-chase-scene to steal a sequined fanny pack, but is also perpetually underestimated intellectually and whose rapid-fire psychoanalyses of friends and enemies is wholly accurate. (Joker, Harley and their gang rained mayhem on Gotham in the 2016 film Suicide Squad, but don’t make an effort to watch it; the backstory in this film is plenty.)

Birds of Prey begins just after Joker breaks up with Harley, and she’s feeling lost. “Do you know what a harlequin is?” she asks, in her squeaky 1940s-moll-from-Queens voice. “A harlequin’s role is to serve.” Okay, got it – she’s going to come into her own, she’s going to achieve the emancipation in the subtitle.

Next, through a voice-over and unnecessarily confusing flashbacks, Harley introduces us to other angry women. Renee Montoya (Rosie Perez) is the best cop in Gotham City, but her male colleagues marginalize her. Helena Bertinelli (Mary Elizabeth Winstead), also known as the Huntress, watched a rival mobster slaughter her whole family. Cassandra Cain (Ella Jay Basco) lives with abusive foster parents. And Dinah Lance (Jurnee Smollett-Bell), a.k.a. Black Canary, has mother issues. Eventually, accidentally, improbably, they will band together.

Good set-up, right? So wouldn’t it have been great if the women behind this film – screenwriter Christina Hodson, director Cathy Yan and producer Robbie – had made that anger more explicit and meaningful? If they’d developed it into an idea, like that violent female anarchy, freedom from all decorum, is a valid response to centuries of misogyny? Instead, we get scattershot hints that feel like feminist afterthoughts.

And why didn’t they make their lead villain, Roman Sionis (Ewan McGregor), a.k.a. Black Mask, hate women specifically? That would have been so logical. Instead, he’s an amorphous collection of vile quirks – he’s spiteful, he peels off victims’ faces, he doesn’t like bodily emissions, he appears to be sexually fluid, he wears many pairs of gloves – that have nothing to do with Harley and co.

Sionis’s sidekick, Victor Zsasz (Chris Messina), certainly hates women. Near the end, he bears a chestful of scars and announces that each represents a woman he’s killed. So why haven’t we seen that happen? Why is it just tossed off?

A running gag in Birds of Prey is that Harley, severed from Joker’s protection, is now the target of the many people she’s wronged. As they come for her, the slight she’s done to each is scrawled onto the screen. How fun would it have been if those slights were a laundry list of the things women “do” to men, rather than what we get: a random collection of nonsense?

I could go on, but I should probably review the actual movie. One of Harley’s many weapons is the Fun Gun, a mini-bazooka that shoots lethal beanbags, coloured-smoke pellets and glitter bombs, and that seems to be the metaphor Yan built her film around. Every five seconds there’s a new burst of zany. The final battle is staged in that evergreen trope – the abandoned amusement-park funhouse where everything is cobwebbed except for the one room where things work perfectly, flashing neon lights are inexplicably on and the art director clearly had an unlimited budget.

On the plus side, Robbie is a proper star, and she does everything she can to show us Harley’s mayhem-stained soul. Yan’s action sequences are lucidly staged and shot, visceral and exciting. I particularly liked watching the Huntress on her motorcycle towing Harley on roller skates during a high-speed chase through Gotham; she periodically whips Harley into cars, so she can bash henchmen’s heads into their steering wheels. (Only a woman would have cast Winstead as a badass, and bless Yan for it.)

There was something weirdly heartening in how thrilled the men in my audience were to see Harley stomp on her male enemies, particularly when she breaks their legs. One slo-mo stunt – Harley throws a baseball bat that ricochets off the ground and into someone’s face – elicited delighted oohs from everyone.

And kudos to the soundtrack, a chick-centric collection including Patsy Cline, Joan Jett, Halsey and Kesha, where the songs are either creepily slowed down or sped up, thrashy and superloud. (My ears were still ringing 45 minutes after I got home.) It’s a Man’s Man’s Man’s World features prominently, a deliberate irony that I wish this film earned.

Birds of Prey opens on Feb. 7. 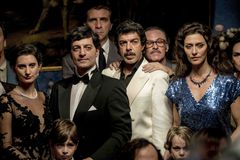 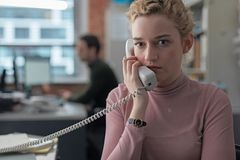 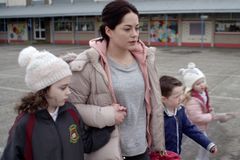