The zombie movie is both the smartest and dumbest genre of filmmaking.

In one corner, you have horror’s greatest minds using the walking dead as sly metaphors for the terrors of racism (George A. Romero’s Night of the Living Dead), the zero-sum game of political isolationism (Danny Boyle’s 28 Days Later), rampant consumerism (Romero again, with Dawn of the Dead), the stigmatization of female sexuality (David Cronenberg’s Rabid) and the thin veneer of civility that keeps modern society chugging along (Yeon Sang Ho’s Train to Busan). But the zombie movie can also be wielded as a weapon of gore-soaked nothingness, too – there is about as much active grey matter involved in House of the Dead, Return of the Living Dead and the latter Resident Evil films as there is in a ghoul’s hollowed-out skull.

Canadian director Jeff Barnaby’s stab at the zombie film, Blood Quantum, fortunately swings toward the metaphorical end of the undead entrails; it is as much a gusty dissection of colonialism as it is a gut-spilling splatter-thon.

Read more: Blood Quantum’s Jeff Barnaby on the history and horror of his Indigenous zombie movie: ‘I feel like I barely got out of this one alive’

The film’s conceit is certainly novel enough to set it apart from the many Romero wannabes who have crowded the zombie market over the past few years. One day on the First Nations reserve Red Crow in Northeastern Quebec, the salmon start springing back to life for reasons unknown. Quickly, the area finds itself under siege from blood-caked hordes of flesh-eaters familiar to any horror fan – except that this time, humanity’s best hope rests not with some motley crew of white survivors who have miraculously escaped the walking dead’s bite.

Instead, it is the land’s Indigenous people – a group long forced to prove their First Nations ancestry by submitting to governmental “blood quantum” measurements – who find themselves immune to the zombie plague. Whether that can be traced to the fact that First Nations were introduced to so many diseases long ago by European settlers or, as one Red Crow resident darkly notes, “maybe the Earth just forgot about us,” is never explained. Nor is such an answer necessary; the mystery is the means for Barnaby to rip into Canada’s shameful history and write his own chapter. Now, Red Crow must protect its families from a wave of desperate white Canadians seeking shelter on a land they’ve previously shunned.

Barnaby’s twist is ingenious in conception, and his script is careful to balance the film’s politics with the almost obligatory beats of a zombie film. Cultural theorists will have a field day with Barnaby’s many stark allusions – one image pointedly echoes Shaney Komulainen’s infamous Face to Face photograph from the 1990 Oka Crisis – while gore-hounds will be satiated by the film’s body count. Just as the filmmaker’s first feature, 2013′s Rhymes for Young Ghouls, used the mechanics of a surreal thriller to break down the tragic legacy of Canada’s residential schools, Blood Quantum employs genre to rethink and even reboot the past.

The only trouble is that Barnaby’s twin focus on politics and blood ends up neglecting the living, breathing human element of any zombie film. If we’re meant to care about any such survival story, we have to latch onto those who survive, and Blood Quantum is almost wholly absent any fully developed character.

Michael Greyeyes’s stoic police chief, Traylor, is positioned as the best audience avatar, but Barnaby can’t seem to be bothered with making him anything but a flat stand-in, as if there were a much better hero to be sketched in during a later draft that never materialized. Elle-Maija Tailfeathers as Traylor’s ex-wife and Forrest Goodluck as their teenage son don’t receive much more attention, either – perhaps because Barnaby spent most of his energy crafting Lysol (Kiowa Gordon), Traylor’s other son, whose hot-headed approach to the plague seems to distill a century’s worth of Indigenous pain and suffering. There is a sense, though, that even Barnaby tires of this sometimes confused side-character, preferring to take emotional and narrative short cuts to tie everything up as neatly as possible.

Still, Barnaby takes some big, messy swings in Blood Quantum, and walks away both clean (in artistic purpose) and dirty (in viscera) as anyone can hope for when it comes to zombie movies. Romero should be spinning in his grave. In a good way. 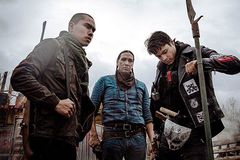 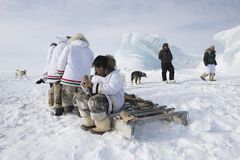 TIFF 2019: Triple threat Elle-Maija Tailfeathers is fighting for so many more voices than herself
September 10, 2019 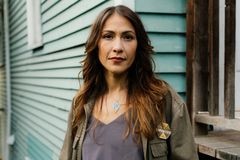