My first question is: why? Why remake a movie that could not possibly be improved upon? Why sand down the edges of a brilliantly spiky film? Why cast Will Ferrell in a role that pivots on the expression of subtle shifts in mood? To quote awards season’s most valuable player, Bong Joon Ho: “the one-inch tall barrier of subtitles.” I can’t imagine why else the producers of Downhill would take a film so tightly coiled with dramatic tension and unspool it until the thing goes slack.

Downhill is based on Swedish filmmaker Ruben Ostlund’s 2014 film Force Majeure, in which a family on a ski holiday in the French Alps finds their equilibrium disturbed by an incident early in the trip. The family is having lunch at an outdoor restaurant at the bottom of a mountain when a controlled avalanche suddenly barrels toward them; for a moment it looks as though it’s about to engulf the building, and as the diners run screaming, the father instinctively bolts – leaving his wife and two children behind. When the fog clears, it turns out the torrent of snow left only a light dusting. People return to their tables, chuckling, but the experience lingers, colouring the rest of the holiday.

While Ostlund lets the ensuing tension build throughout his film, Downhill directors Jim Rash and Nat Faxon – who co-wrote the script with Jesse Armstrong – can’t resist the urge to immediately pop every bubble. Downhill is billed as a “dark comedy,” but there’s not much of either here; broad, goofy gestures at humour compete with half-hearted attempts at pathos. It’s plagued from start to finish by wavering intentions that result in an unfocused, unfunny film.

Ferrell is a major source of the problem. His casting as husband Pete dulls the movie’s inciting incident, because viewers have been conditioned to see him as just the kind of buffoon who might run away from his family in an impending disaster. With Ferrell in the lead, everything becomes a joke, and it’s often unclear whether the writers intended for him to play for laughs or if that’s just the way Ferrell’s gangly, wide-eyed shtick renders material this tonally confused.

Julia Louis-Dreyfus fares better as Pete’s wife, Billie. She’s the only performer here who convincingly telegraphs the emotional turmoil that the avalanche sets off, particularly in an affecting speech in which she describes the incident to another couple. But the filmmakers quickly break the spell and end the scene on a lazy punchline.

The original film was an exercise in restraint, a cat slyly enticing you to follow its path. So of course the American version is a dog pulling on a leash. This movie thinks we’re too stupid to understand what the characters might be going through without spelling it out in letters 10-feet tall. “This was a huge event for our family!” Billie complains to a hotel employee, 20 minutes into the movie. Half an hour in and she’s screaming and throwing ski poles on the ground.

The filmmakers struggle to stretch things out for the rest of the 86-minute run time, which feels much longer. They pad it out with a grab bag of superfluous plot points and characters, many of whom are crude American stereotypes of Europeans: the sex-crazed middle-aged German woman (Miranda Otto), the hunky Italian ski instructor (Giulio Berruti). Zach Woods and Zoe Chao briefly show up to needle Pete and Billie with the optimism of young love. Julian Grey and Ammon Jacob Ford play the couple’s blandly annoyed young sons, who don’t say much but have the occasional, absurdly tone-deaf line. Kids don’t say things like, “It doesn’t seem like you really want to be here” to their parents.

This doesn’t bode well for other high-profile adaptations of acclaimed foreign films, including an apparently forthcoming HBO limited series based on Parasite and an English-language remake of the 2016 German comedy Toni Erdmann. The producers behind those efforts should view Downhill as a cautionary tale of what happens when you take an original concept and map it onto the paint-by-numbers template of a feel-good Hollywood film. Allow me to save you some time and money: Force Majeure is streaming on Amazon Prime.

Film Review
With clever nods to the original video game, Sonic The Hedgehog is a delight for fans
February 14, 2020 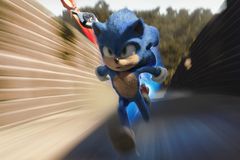