One of the most gleeful revelations in this week’s New York Magazine Q&A with Anjelica Huston was her sly subtweeting of the movie Poms. When asked what it takes to convince her to appear in a movie these days, Huston replied: “Quite honestly, I’m looking for movies that impress me in some way, that aren’t apologetically humble or humiliating like, ‘Band of cheerleaders gets back together for one last hurrah,’ you know. An old-lady cheerleader movie; I don’t like that kind of thing. If I’m going to be an old lady – and I’m a sort of touching old lady these days – at least I want to be a special old lady. I don’t want to be relegated to some has-been making a comeback.”

Opening just in time for Mother’s Day, Poms is that de-facto apologetically humble and humiliating old-lady cheerleader movie, featuring a cast that includes Diane Keaton, Pam Grier, Rhea Perlman and wonderful Australian character actor Jacki Weaver. Functioning somewhere between a very special episode of Grace and Frankie and Old Dogs-do-Bring It On, Poms has spirit (yes, it does) and eventually delivers on the promise of its premise. But it also has one of the worst sympathy-baiting cancer plots in history and a godawful script where every defining character choice gets decided on a whim. For what’s supposed to be a feel-good comedy about late-in-life cheerleaders defying societal expectations for one last chance to climb the top of the pyramid, there are, weirdly, a lot of scenes of Keaton vomiting. Can I get a A-N-O-T-H-E-R R-E-W-R-I-T-E?

Director and co-writer Zara Hayes, whose experience lies chiefly in documentary filmmaking, lucked out with an amazing cast but seems afraid to harness their chemistry. Lacking cinematic vision, Poms is flat and unenthusiastic (which are two very un-cheerleader-like qualities). The movie’s climatic cheer routine is delivered by Hayes’s actors standing in a line and slowly bending at their hips. Desperately wanting to look and feel like Something’s Gotta Give, it settles for a septuagenarian Lifetime aesthetic. It is the Ann Taylor Loft of movies: a downmarket version of your cheeriest blazer.

Keaton, as a more embittered version of her usual screen persona, plays Martha, a closed-off New Yorker who randomly decides to move to a sunny retirement community in Georgia. (Why does she have no friends or family?) As she tells an insipid busybody Southern belle, who becomes Poms’ chief antagonist, the purpose of the move is “to die.” A chance encounter with her down-for-whatever neighbour Sheryl (Weaver, whose sunny buoyancy enlivens Poms toward a lot of fun) sees them form an unlikely friendship. Soon, Martha’s glugging white wine with the best of them (despite her life-threatening cancer, which comes and goes as this movie pleases) and telling Sheryl a secret confession: She’s always dreamed of being a cheerleader but was forced to give it up due to her tragic past. The two pals decide to recruit a team of misfits (amongst them Perlman, Grier, Phyllis Somerville and the very funny Carol Sutton) to form a cheerleading squad in their straitlaced retirement community. Who are they cheering for? They don’t know, really! The point is just to feel good before death’s cruel embrace.

Parts of Poms feel like a Dove beauty campaign (such as the scene in which Keaton forces her squad to look themselves in the mirror and name one thing they love about what they see). But that’s preferable to the melodrama of Keaton deciding to hide her illness from them. It makes no sense that this fun, feel-good movie about senior citizen cheerleaders should waste so much precious screen time on miserly Keaton hacking up her Metamucil or whatever. If you’re going to make a movie about elderly cheerleaders, bring some brio and physicality to it. Hurl Perlman into the air, make Grier do the splits, get Weaver leaping into a front handspring. Poms rebuffed all my wildest dreams, hopes and expectations in favour of Keaton constantly vomiting, and that’s just cruel!

When Keaton and Weaver are unshackled from their exposition-heavy dialogue, they crackle with intelligence and humour, as does a story line that pits the squad against a rival group of high school athletes. Any movie in which a mean teen cheerleader tells Weaver to “break a hip,” to which she retorts, “get pregnant,” is something special. But if you really want to watch a clever, well-executed movie about senior citizen cheerleaders covertly practising in a retirement home, check out Canadian filmmaker Pat Mills’s Don’t Talk to Irene instead. It’s twice as funny and features yet another so-called has-been: Geena Davis.

To Huston’s point: As the baby boomer icons of the 60s, 70s, and 80s age into their senior years, what do we owe this glut of incredible character actors? Ultimately, we need rich and complicated ensemble films for women over 50, movies that don’t apologize for their existence in the first place. Now that would be something to cheer for. 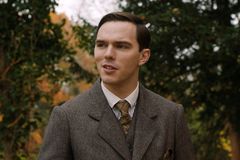 Film Review
Red Joan is the spy who bored me
Subscriber content
May 2, 2019 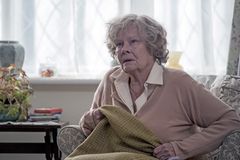