Never before have I wished for the sweet relief of Norbit.

In 2007, Eddie Murphy made what is easily the worst film of his, or anyone else’s, career – a har-har-splat-splat gross-out comedy about a dweeb named Norbit (Murphy) who tries to escape his marriage to a severely obese woman-slash-monstrous tyrant (also played by Murphy). The movie was so cruel, crass and how-low-can-you-go disgusting that it has since become Hollywood shorthand for torpedoing your career. (Some industry-watchers believe that Murphy lost his chance at an Academy Award for his performance in Dreamgirls thanks to Norbit’s stain.)

But while watching Murphy’s long-time-coming sequel Coming 2 America the other week, I felt frequent pangs of nostalgia for Norbit. Although that fat-suit-heavy film was an unbearable thing to experience, it was also genuinely committed to its distasteful sensibility. Norbit was memorably offensive. Coming 2 America is merely offensively forgettable.

Opening 33 years after the events of the first movie – giving the sequel the third-longest ever lag between film-franchise entries, after the 54-year gap between Mary Poppins and Mary Poppins Returns and the 35 years between the two Blade Runner films – Coming 2 America finds Murphy’s Prince Akeem Joffer set to finally become king of Zamunda. His nation is prosperous. His wife Lisa (a returning Shari Headley) is loving and supportive. His three daughters are headstrong. Life is good, aside from the pesky General Izzi (Wesley Snipes), who has his eyes on Zamunda’s throne. Oh, and whatever problems might arise from Akeem discovering that he has an illegitimate son, Lavelle (Jermaine Fowler), who was sired during his brief visit to New York so long ago.

For instance: Remember Coming to America’s decent running gag about the McDonald’s fast-food rip-off named McDowell’s? Well, it’s back, albeit with no fresh purpose. Same thing with jokes about princesses who agree with whatever their husbands-to-be say, the presumed hilarity of a Rick James-like singer named Sexual Chocolate and a half-dozen other recycled bits that feel less like instances of semi-excusable fan-service and more like damning evidence of lazy scriptwriting.

What’s more puzzling: For a movie that stars Eddie Murphy, and not only as Akeem but at least five other characters, there is precious little Eddie Murphy in Coming 2 America. A surprising amount of screen-time is instead devoted to Fowler’s character, a kind but impulsive young man who isn’t quite sure what to make of his newfound Zamunda celebrity. Lavelle’s fish-out-of-water journey from America to Africa is naturally intended to backwardly echo Akeem’s from the first film, but it is more blandly sweet than reliably entertaining or remotely funny.

The film’s overwhelming preference for heart over humour is likely due to Murphy’s late-career curve. The filth of Norbit aside, the actor has invested heavily in family-friendly material over the past two decades – so many Shreks and Doctor Doolittles and Nutty Professors. I guess I shouldn’t have been surprised, then, by Coming 2 America director Craig Brewer’s defiant turn away from the slightly dangerous comedy of John Landis’s original. Yet in my defense, I did have decent reason to expect more than Daddy Daycare 2.0; Brewer and Murphy’s previous collaboration, 2019′s Dolemite Is My Name, was a genuinely hilarious blast of energy that promised a brand new Era of Eddie.

I guess not. The closest that Coming 2 America gets to lighting a fire under its audience is whatever high-camp shtick that Snipes, another Dolemite veteran, is doing as General Izzi. And Arsenio Hall, long absent from the movie world since he collaborated with Murphy in the original Coming to America, gets some half-decent shots as Akeem’s right-hand man and several other side characters. But otherwise, it is all pointless high-wattage cameos, time-eating musical performances and easy Wakanda jokes that you or I could have dreamt up, given the chance.

Coming 2 America was, like so many other movies, supposed to open in theatres last year. Instead, Amazon Prime Video snapped it up from Paramount Pictures for a reported US$125-million. But here’s a tip: Norbit is currently available on Netflix, for just $9.99 a month.

Arsenio Hall is the happiest man in Hollywood, even though he knows you’re wondering where he’s been
February 22, 2021 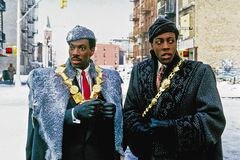 The most exciting movies coming out in 2021 that Canadians will actually be able to watch
Subscriber content
December 30, 2020 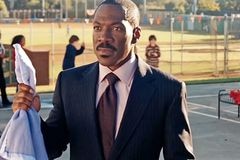