As if parents weren’t already feeling guilty about their locked-down children’s screen time, along comes Jacob Chase’s new horror film Come Play, in which the killer’s call isn’t coming from inside the house but from inside the iPad.

Following in the footsteps of the technology-is-worse-than-ghosts movies Unfriended (fantastic), One Missed Call (pretty good) and, um, Fear Dot Com (poor Stephen Dorff!), Chase’s feature debut makes a compellingly spooky case for the destruction of all smartphones, tablets, televisions and laptops. Positing that the distracting nature of household screens has caused us to turn away from the responsibilities of family, Come Play mixes the too-real horror of modern parenting with the only-slightly scarier horror of the supernatural.

On paper, this might sound like an unbearably hokey and guilt-inducing concept, especially for an era where we’re compelled to spend more time with our loved ones than we ever imagined. But it works surprisingly well in Chase’s confident hands. The film is still ridden with the worst tics of the genre – annoying gotcha! scare moments, creature design that is more cartoonish than creepy, an over-reliance on dark rooms to lazily convey a sense of dread – but Come Play’s themes, characters and story are too strong to lump the film in with the wave of sub-tier horror flooding the market this month.

Friendless and feeling the strain of his parents' deteriorating marriage, Oliver (Azhy Robertson) spends most of his time watching SpongeBob SquarePants on his iPhone and iPad, devices that also help him communicate with the rest of the world due to his non-verbal autism. Increasingly isolated at both home and school, Oliver just wants a friend. And he finds one! Unfortunately, his new acquaintance is a long-limbed monster named Larry who lives inside Oliver’s many screens and desperately wants to get out into the real world. And so begins a desperate fight for survival for Oliver, his exasperated mother (Gillian Jacobs) and his ne’er-do-well father (John Gallagher Jr.).

While Come Play’s villain is more silly than frightening – he looks like a cross between Gollum and the neo-folk legend Slender Man, and is named Larry for goodness' sake – his methods are effective. Any parent already suspicious about how much of the day their children spend watching YouTube can relate to Oliver’s mom and dad, who uneasily juggle financial and familial duties. And Chase even slides in an effective side-lesson about the burden that women carry in regards to the emotional labour necessary in running a household. Only when it’s too late does Oliver’s sporadically employed, emotionally disengaged dad realize that he needs to step up in order to stamp out the evil plaguing his family.

Chase’s vision might have been muted, though, if he didn’t top his cast with a trio of excellent performers. Jacobs, best known for her sharp comedic timing on television’s Community and Girls, brings a real sense of anxious compassion as Oliver’s mom, while Gallagher Jr., more of a horror veteran thanks to his performances in 10 Cloverfield Lane, Hush and Underwater, ensures his character is sympathetic without tipping over into pathetic. But it is Robertson, recently seen headlining HBO’s Plot Against America miniseries, who gives a real sense of aching loneliness and heartache to Oliver, a little boy who only wants what every kid desires: a buddy.

The best news about the movie, though, is that you don’t have to worry about your under-supervised children accidentally streaming it on their tablets at home. For now, Come Play is exclusively playing in theatres, where the only Larry is the masked dude selling popcorn behind the plexiglass. 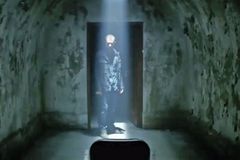 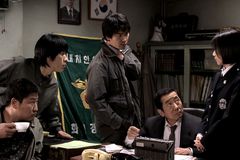 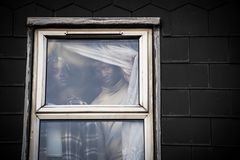